Poor old Sonos Connect. In desperate need of an internal refresh, old faithful struggles to cut it on sound quality when compared to the best digital audio streamers on the market today. Its internal DAC can’t match the resolution and tonality of the AURALiC Aries Mini (covered here). Nor can it match the Chinese alternative as a digital transport; its S/PDIF outputs sound comparatively lifeless. The Connect’s Toslink output serves up less treble glare than its coaxial neighbour.

Sonos’ integration of numerous streaming services throws a long shadow over AURALiC’s Lightning DS, which is restricted to lossless provision from Tidal/WIMP and Qobuz.

My demand for the best sound quality is often tempered by music’s availability; Tidal doesn’t serve up some of the rarer/newer electronic cuts and DJ mixes found on Soundcloud and Mixcloud. Both of these lossy streaming services run on Sonos but not on the Aries Mini. Ditto Pandora which I often use on the Sonos Connect for playlist building when friends stop by.

If you’re committed to building a system around the Sonos brick then the most obvious first step towards improving its sound quality is the addition of an external DAC. 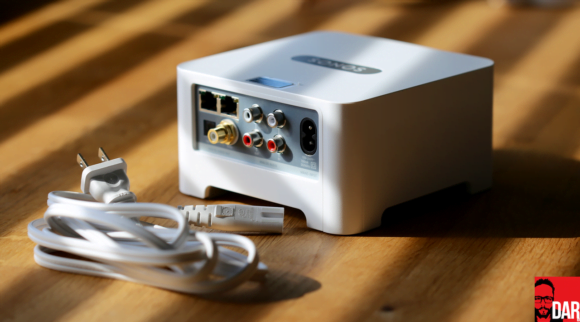 Delivering nicely on price-performance division is the Schiit Modi 2. The Connect doesn’t output over USB like the Aries Mini so you’ll need the Uber version (of the Schiit, US$149) that adds coaxial and toslink outputs. Lasso the Connect to DAC and you’re off to the races with better sound for under two ton.

New D/A converter in tow, what to do about the Connect’s tendency toward nervous transient tension when siphoning the digital audio stream from its coaxial and (to a lesser extent) optical outputs?

The Wyred4Sound modification (covered here) installs the equivalent of a Remedy re-clocker (covered here) inside the Connect and restores a sense of ease and liquidity to the Connect’s presentation. EJ Sarmento’s modded Connect remains my favourite streamer when judged on SQ alone but it doesn’t come cheap: US$550 + two-way postage for the surgery or US$399 + an additional S/PDIF cable for the Remedy.

Not all Sonos owners will want to spend more than the Connect’s US$349 street price in trying to elevate its performance.

Nordost’s Michael Taylor set the scene for this review coverage at CES 2016. At the company’s Venetian Hotel suite, he demonstrated the influence of spendier power cables on a dCS Rossini disc spinner and DAC. Amplification came from Jeff Rowland, loudspeakers from Magico. 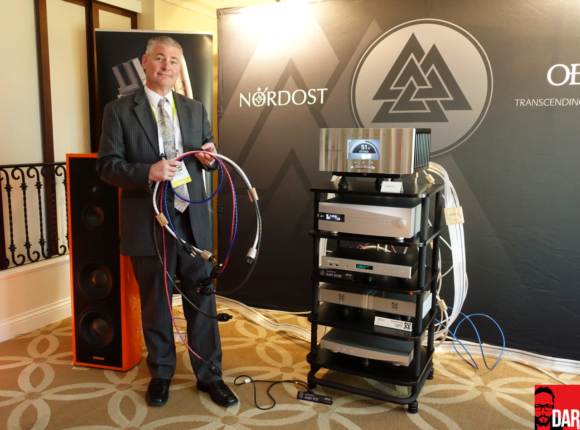 We began with the dCS’s stock mains cord. A move to Nordost’s Blue Heaven (US$250+) seemingly brought more lung depth and greater vocal presence to an Alan Taylor cut. That was stranded teflon at work on a stranded design. A move to Heimdall 2 (US$629+) took power conduction from a stranded design to a solid core. Improvements to image depth and layer separation were noted. More nuance too – no mean feat in an audio show environment Lastly, the seriously costly Frey 2 (US$1679+) brought even greater avidity to the sound.

It was during this demo that I learnt of Nordost’s Purple Flare power cable; its Figure-8 termination promised better sound from – you guessed it – the Sonos Connect. A one meter length sells for US$170. Additional half meter increments up to a maximum of 4 meters (US$350) are available.

Previous in-home experience with audiophile-targeted power cords from Morrow (here) and LessLoss (here) already had me convinced that deluxe wire can make a difference, most likely because of its ability to mitigate the detrimental effects of mains sourced electrical noise.

The Purple Flare’s combination of affordability and application breadth piqued my interest. Would Nordost send me one to try at home? Does Grizzly Adams have a beard? 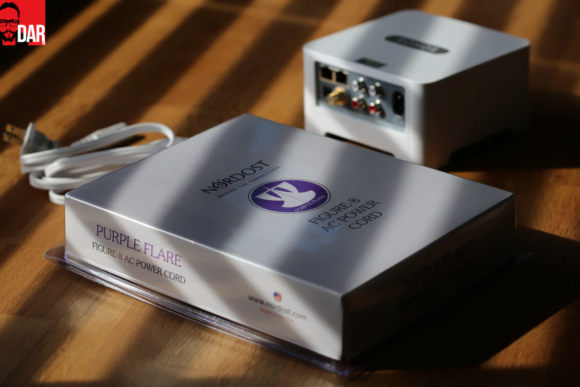 By winding an FEP filament around each conductor the outer FEP sleeve doesn’t touch the signal-carrying core. Nordost assert that creating an air gap between conductor and sleeve makes for superior noise isolation and therefore a better sounding cable.

According to their website’s FAQ: “This minimizes contact and dielectric absorption as well as creates a virtual air environment. The spiral filament also delivers excellent mechanical damping and ensures superb geometrical precision.”

For those who think it’s all nonsense, stick with your kettle cord and be happy that this remains surplus to your requirements. You’ve now more cash in the bank than the rest of us. Readers are also reminded that this isn’t Consumer Reports or Which? magazine. The discussion here is resolutely subjective.

Popped from its plastic packaging, the Purple Flare’s luxury vibrant colour and robust feel helps us swallow the bitter pill that mains power quality can affect the sound quality of audio gear. It’s not as stiff as the LessLoss, not as flexible as the Morrow. Business end termination comes from a Wattgate plug.

I substituted the skinny white power cable that ships with the Sonos Connect for the Purple Flare and let her rip for a few days before taking to A/B testing.

And yet, paradoxically, the additional intensity brought by the Nordost wire also sounded more relaxed. Joining the dots between amped up fervour and greater repose is our third qualitative descriptor: effortlessness.

Isn’t that often the complaint of a die-hard vinyl-head’s first experience with digital: that it connotes rigidity and agitation – the opposite of their beloved black discs’ easefulness? The Nordost power cable dissolves some – but not all – of the Sonos’ shortcomings as a streamer, especially its coaxial output. It elevates the performance of the Wyred4Sound-modded version too but to a lesser extent.

We’re not talking night and day differences. The uptick in performance brought by the Nordost cable isn’t as significant as adding the Schiit DAC.

An extra sugar in your coffee doesn’t change the taste of the bean. Similarly, the Purple Flare can’t work magic with poor source material – it simply removes some of the Connect’s bitterness as exposed by a high end audio setup. With the Vinnie Rossi LIO handling D/A conversion and amplification (covered here) of Spatial’s M4 loudspeakers, complaints of treble glare and nervous tension are harder to lodge. 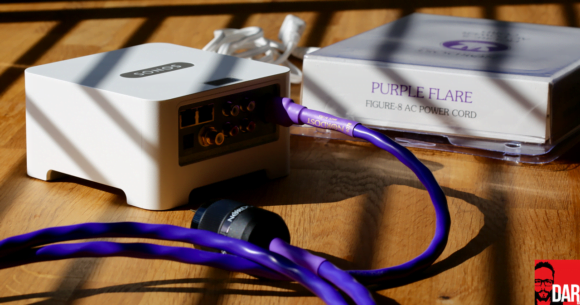 You do the math/s: US$349 for the Sonos Connect, US$149 for the Schiit Modi Uber, US$170 for the Nordost Purple Flare. That’s all in for US$668 – within credit card throwing distance of the AURALiC sticker.

The Mini comes loaded with a built-in server to source tunes from a connected hard drive, either within its belly or externally via USB; no home computer required. The Sonos device does not – a Mac/PC must serve local content from elsewhere on the home network. The Connect is better suited to folk already knee deep in multiple streaming services; a Sonos playlist can be built within any of its control apps from myriad sources, lossy or lossless.

The Purple Flare might be a long way from Nordost’s statement US$11,000 Odin power cord but even at the entry-level power cables make a difference. That’s useful intel for those looking to juice more from their Sonos Connect…or Mac Mini. There are Apple slabs aplenty in the digital audiophile world. Try it – you might like it. 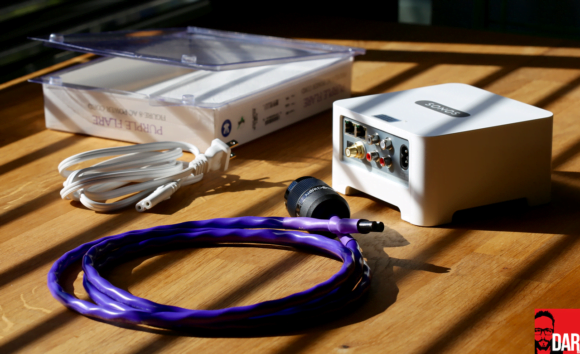