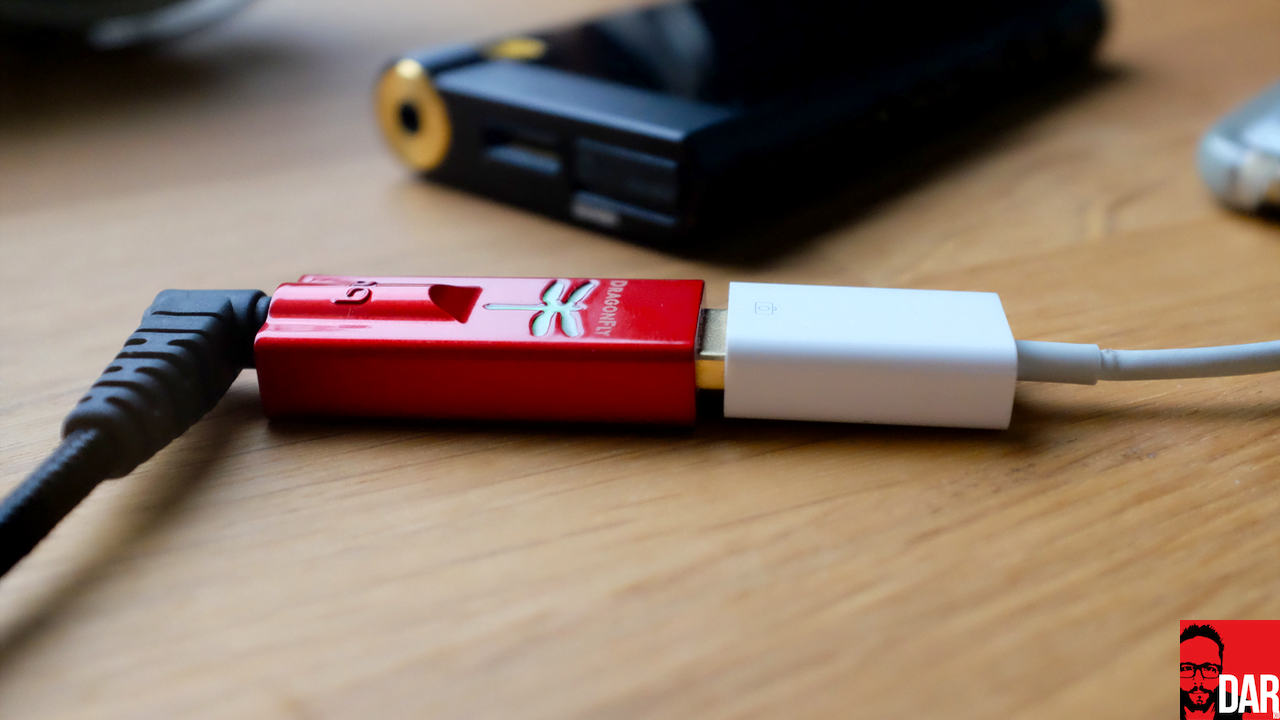 DragonFly – the story so far: the average laptop computer isn’t built with audio sensitivities in mind. With ongoing downward pressure applied to computer design budgets, only the most basic of DAC and headphone amplifiers chips are included on the motherboard found inside a Microsoft Surface or Apple MacBook. From an audiophile perspective, they are little more than functional. Their sound is often one that’s big on layer congeal, lacks air and is shy with dynamics.

One way to improve the sound quality of one’s Mac or Surface (or any computer running Windows or OS X) whilst keeping cash drop and portability (literally) in the pocket is AudioQuest’s DragonFly dongle DAC / headphone amplifier. The original 2012 version sold for US$249. Arriving two years later, a refreshed DragonFly v1.2 gave listeners more for less at US$149.

AudioQuest announced the availability of the US$199 DragonFly Red too – we’ll get to that shortly. 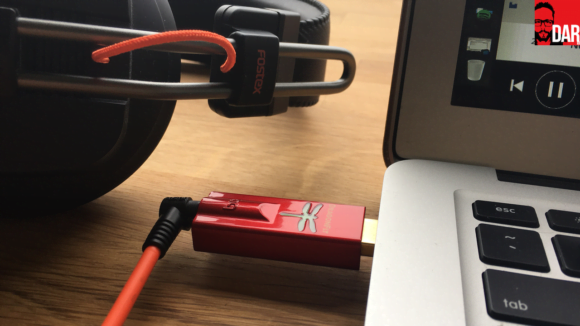 As covered here, Black sounds better than v1.2. Once again, we get more for less.

However, further icing the new DragonFly cake is AudioQuest’s sleeve-stashed ace – full compatibility with all iOS and Android devices which, like laptops, only get the most basic of internal audio circuitry. Such connective wizardry is largely down to the Microchip silicon’s super low power draw. It requires a mere quarter of the current supply needed by the previous TI receiver chip.

Rankin elaborates: “DF1.2 registers itself with a calculated maximum current draw of 100mA. Usually, that is more like 55-75mA depending on what headphones you use, etc… The new Red [and Black] registers its maximum at 24mA.”

An OTG (‘On The Go’) USB cable connects the DragonFly Black/Red to an Android phone or tablet. Some Android devices will also require the intervention of CyanogenMod or the USB Player Pro app.

iPhones and iPads offer plainer sailing. Apple’s Camera Connection Kit (US$29) connects any iDevice to the DragonFly Black with plug and play simplicity.

Say hello to my little friend:

A Velcro tab secures the AudioQuest dongle to the back of an iPhone 6S Plus. The big news here is that this Black-charged ‘ghetto DAP’ pulls up alongside the Astell&Kern AK120 II in terms of sound quality but steps ahead on functionality and UX.

The Pono Player’s beautification of music is what sets it apart from the DAP pack. No doubt the byproduct of Charlie Hansen’s firm adherence to discrete output staging and absence of global feedback. But much like the Astell&Kern unit, the Pono Player’s app-less interface doesn’t stream Spotify, Tidal, Pandora, Soundcloud et al. It only plays files loaded into its internal storage or inserted micro SD cards. And neither DAP’s battery life is sufficient for long-haul flights.

Streaming service app installs from the Google Play Store and 30-hour battery life are two reasons why one might move to a Sony NW-ZX2 (as I did). The 21st Century Sony Walkman is a heavily disguised Android phone that trades in call and SMS functionality for D/A conversion and headphone drive designed with audiophile sensitivities. Like the Astell&Kern players, the Sony’s headphone output is on the weak side. Fine for IEMs, less so for thirstier cans. The DragonFly Black supplies more of the necessary go juice as called on by the Fostex T50RP MK3 than the Sony portable. Wow.

The bad news for Sony and Astell&Kern doesn’t end there. Your wallet, on the other hand, will like what it’s about to hear.

Also shipping this week from AudioQuest is DragonFly Red. It’s a souped-up Black. To wit, we get the same Microchip USB receiver as Black with the same 24bit/96kHz PCM ceiling and firmware upgradability. (AudioQuest’s OS X and Windows apps are still to come).

That’s where the similarities end.

The most obvious difference between Black and Red is on entry-fee. At US$199, DragonFly Red sells for double the Black’s asking. That might be too rich for Doug’s blood but seasoned audiophiles accustomed to thousand dollar decoders won’t even flinch.

On the inside, Red sports hotter chips – “the latest ESS headphone amp” (according to AudioQuest) and a 64-bit, bit-perfect volume control that’s built into its ESS Sabre 9016 DAC chip. (Remember: in the Black is a 9010).

On output muscle, the Red says hello at 2.1V – that’s 0.9V higher than Black – and drives HiFiMAN’s HE-1000 just nicely. Red’s tonal nourishment of the high-end Chinese cans isn’t as accomplished as the Modi/Magni combo from Schiit but you can’t take those on the road as easily; each silver brick demands wall power and neither will drop invisibly into a jacket pocket.

Like Black, Red runs from USB bus power and will travel anywhere. Rankin again: “In general the Red will draw less into the same load as Black. But just a little… as the bias current for the Black amp is a little higher.” Translation: Red will dent the portable host device’s battery life ever so slightly less than Black. 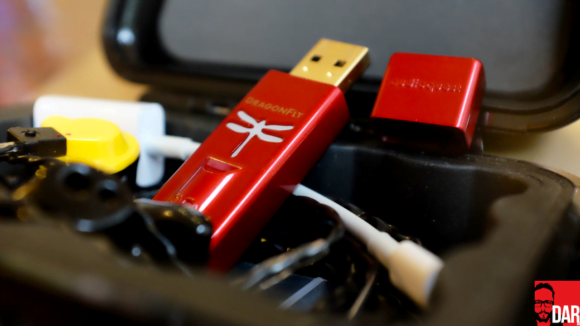 When charged with handling D/A conversion and Fitear Air CIEM amplification, the DragonFly Red displays greater talents with layer separation than its less costly Black bro. The Red is the better of the two in exposing nuances buried deep within Moderat III‘s sometimes dense mix. Ditto the spooky second half of Kate Bush’s The Hounds of Love.

Moving Red from Macbook to iPhone gives us our rude awakening. Compared to the Sony NW-ZX2 and Astell&Kern AK120 II, the blood-Red DragonFly’s allegedly superior DAC, volume control and headphone amplifier prove their collective worth. The aforementioned South Korean and Japanese handhelds are outclassed on detail retrieval, separation and – most obvious of all – finesse.That’s useful for making the post-punk guitar grind of The Peace and Truce of Future of the Left more easily digestible. There’s an exquisiteness to Red’s presentation that neither standalone player can match.

The takeaway? Touchscreen DAPs from Astell&Kern, Sony, Fiio, Onkyo, Pioneer might not yet be rendered obsolete, especially for hardcore head-fiers, but the DragonFly Red casts serious doubt over the need to carry a second phone-sized device in the pursuit of higher sound quality.

If SQ, user interface and streaming service compatibility matter to you more than the bragging rights that ship with limited edition metal finishes and balanced connectivity, then US$199 (for Red) for an iPhone appendage is enough to throw a long shadow over Astell&Kern’s deluxe offerings.

More so with Red than Black, AudioQuest pose a rhetorical question: if a smartphone provides the interface and streaming apps and the DragonFly Red gives us audible superiority over the iPhone itself as well as many rival DAPs, is spending (often heavy) cash on a dedicated player a serious over-indulgence? Pass the Mylanta. 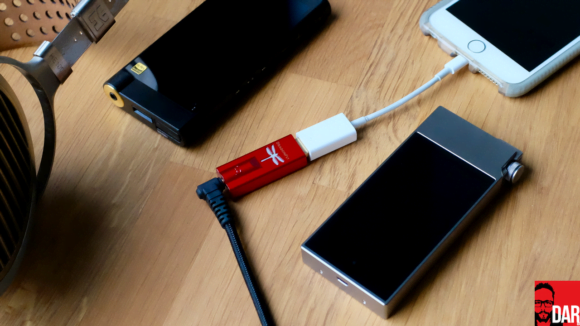 I’ve reviewed a number of a DAPs over the past few years. Neither the AK100, the AK120, the AK120 II, the AK Jr. nor the Sony NW-ZX1 satisfy this listener’s thirst for felicitous SQ on the go as much as AudioQuest’s ‘Fly dongles, particularly the Red. The PIC32MX270 chip’s super low power needs see an iPhone paired with Red (or Black) exceed all but the Sony NW-ZX2 on continuous playtime hours.

With an absence of the same make/model interconnects – one RCA to RCA and the other RCA to 3.5mm – I know not how the Red compares to the DAC inside AURALiC’s Aries Mini. That’s left for other reviewers to unravel. However, I’d be confident of a Red or Black breathing fresh life into a Squeezebox Touch’s now long-in-the-tooth analogue output.

And is affordability not the number one precursor to accessibility? If so, the Red and Black are easy-access goods. No doubt we’ll soon see readers taking a blind punt and reporting back here or elsewhere.

If neither Red nor Black does it for you in your loudspeaker-fronted system, it can be readily redeployed as smartphone or laptop appendage to bring your favourite headphones to life. The host device’s location and supporting OS are now almost immaterial. You can do it with DragonFly Red or Black on the bus with a Samsung Galaxy Sx; on the train with an iPhone; in the office with an iMac; at home with a PC. Either variant will bring a consistent improvement to the audible quality of locally hosted files and, the kicker for mobile users, streaming service supply, irrespective of the host device’s OS. 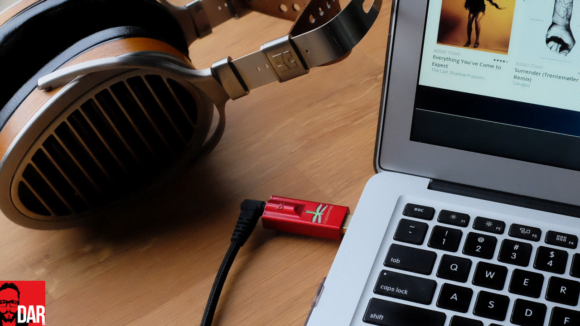 With a 3.5mm output socket in common, comparing DragonFly Red to Chord Electronics’ Mojo is easier. Neither Red nor Black DragonFly is as resolving or as internally capaciousness as the sound spilling from Chord’s battery-powered brick. In other words, the Mojo is better. Just as the Red convincingly earns it US$100 premium over the Black, the Mojo remains king of the sub-$1000 DAC hill. The Schiit Bifrost multibit might be the queen.

The downside for wannabe mobile Chord users cannot be ignored: a Mojo can’t be rubber-strapped to a smartphone without rendering its touchscreen unusable. And even though Chord’s forthcoming extender will resolve this issue for some phones, the package would still be too cumbersome for proper pocketability. AudioQuest’s quasi-inline DragonFly offerings are far more practical.

The irony here shouldn’t go unnoticed. Despite Chord’s ‘Power to the People’ posturing of their most affordable WTA DAC to date, it is AudioQuest who have created the unit(s) with the greatest potential for mainstream crossover. Dongles that will undoubtedly disrupt the portable audio player space too. These critters are for the hardware you have, not the hardware you have to buy.

DragonFly Red and Black are the finest examples of everyman hifi ever to grace these pages. Their value quotients explode the dial. 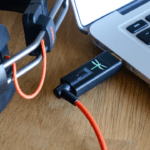 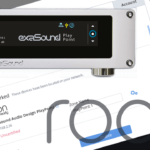