“Let’s get out of hifi,” said the industry observer. “What?!” snapped I. A false alarm rang in the distance. Not a conversation about a career switch up then but one concerning how best to move audio gear promotion/sales from the audio show treadmill and into the public eye. That was CES 2015.

A year on from that very day and the build-it-and-they-will-come mentality seemed to be fraying at the edges in Las Vegas. Would the greater CES at large – that of the Las Vegas and Sands Convention Centres – even have noticed if the high-end audio exhibits that populated the upper floors of the The Venetian Hotel disappeared overnight? Probably not. Plenty of terrific gear is being made in the world of high-end audio but its promotion isn’t cutting through as incisively as manufacturers might hope. At CES at least, high end audio is the leather-pants-wearing uncle of the world of consumer electronics. He who digs Nash and Young but has probably never heard of St. Vincent.

In the audio world, is there not too much noise for any one brand or product to lead the charge into the mainstream; to make audio gear desirable now that it is no longer a necessity? Not only cross-bleed from room after room of audio gear at shows (who largely preache to the choir) but also out on the high street where a fully stocked retail outlet not only sounds noisy but looks noisy. To the unprepared consumer stepping inside for the first time, separating the wood from the trees is a daunting prospect. Easier to reverse out the door than to tackle it head on.

Our industry observer has a point: audio gear might need to quit the scene that birthed it in order to be properly seen. And heard.

Going it alone requires seriously deep pockets. If you’re Bang & Olufsen or Bose that means a global network of dedicated, self-branded outlets. If you’re Harman International, how about a flagship on New York’s 5th Avenue. Devialet supplement a handful of dedicated stores with boutique outlets hosted inside high end department stores – London’s Harrods and Paris’ Colette are the two most oft-touted examples.

Department stores are the obvious choice for positioning the better looking high end audio products, those whose appearance substantiates the price tag as much as sound quality. In other words, the sensation of luxury draws people closer. Sound quality counts for nought when look and feel fail to spark curiosity.

Jonathan Levine knows this inside and out. Levine is the Founder and CEO of New York’s Master & Dynamic whose midtown Manhattan office space – that features an in-house recording studio – is as stylish as their headphones. Metal and leather are the two watchwords that dominate the conversation when talking product design with the company’s chief designer Drew Stone Briggs. He’s ex-Bose, don’t you know.

As per my 2014 review, Master & Dynamic’s (then only) over ear, the MH40 impressive with serious meat-on-bone mass, impressively dynamics (for a closed-back model) and a pendulous low-end that throws down the red-carpet to those looking for something more refined, more sophisticated than Beats by Dre. But it’s the MH40’s looks – their leather-stitched stainless steel headband, aluminium aircups fitted with detachable lambskin leather earpads and the complete absence of plastic – that help these US$399 headphones fully transcended their price point.

At CES 2016, Levine and his team forwent the Las Vegas Convention Centre, where the bigger headphone hitters play ball, in favour of a Venetian Tower suite. His team are young, evenly split between genders. Front and centre was the new MW60  (US$549) over-ear that one might argue is a not a Bluetooth-fuelled sideways move but a refinement of the MH40’s design. For those who travel a lot, a ‘Haliburton Kit’ is available for US$850.

The MW60 sports foldable hinges and can be run passively should its 16-hour battery run out on you. It’s the little things that matter too: transport control and volume switches sit behind the right ear as per the mute button on the MH40. And even though my on-site listening tests only amounted to a few songs, I’d peg the newcomer as not quite as bass heavy as the MH40, it’s top end a little more refined, midrange a smidge more eloquent, even with Bluetooth in play. Could it be that the gains brought by active amplification outweigh those surrendered by the lossy nature of Bluetooth’s transmission protocol? I think so.

Master & Dynamic’s super-stylish Instagram posts show its brand image to be locked down tight and, two years on since the company’s inception, their product range comprises numerous skews, none of which ring registers above the US$1K marker. The challenge for this now barely two-year old company is how best to cut through the noise. How to stand out in hifi stores dominated by AKG- or Sennheiser-branded wall racks of numerous rivals.

For Levine, the answer lies in alternative retail channels, the most obvious being Apple Stores where, viewed alongside rivals Beats, B&O or Bose, the MH40, MH30 or MW60 are just as likely (if not more) to draw first blood from the fashion-conscious consumer’s wallet.

Those who would prejudicially punish good looking audio gear have a tendency to wear aesthetic compromise as a badge of honour. Such ass-backwards logic just doesn’t translate to portable headphones for which function demands suitability to wearing in public. Mums and Dads might not care but young folk do. Style and comfort count just as much as sound; the form is a component function, just as cars fitted with high-end audio hardware could be viewed as kick-ass sound systems that move the listener from A to B. Follow this line of thinking with to its natural conclusion to see headphones as an item of clothing that happens to play music.

This brings us to another of Master & Dynamic’s alternative outlets. In Australia, their headphone range is also sold in Harrolds, a high-end clothing store who have CBD high street presence in Sydney and Melbourne. Remember the Proenza Schouler connection? That allows us to intuit the how and the why of this (at first) seemingly unlikely pairing: headphones sold in a luxury clothing store. One that doesn’t stock Proenza Schouler!

At Harrolds, the tan and silver MH40 are already on back order. The key to this retail success: not only does the store’s select range of men’s and women’s high-end fashion attract the right kind of discerning, cashed-up consumer but it provides favourable price context too.

On display downstairs and to the right, Master & Dynamic’s headphones remain more affordable than 99% of the clothing. During my tour, a Saint Laurent t-shirt was held aloft – it sells for AU$490 – then one from Stephano Richie that’s priced at AU$790. Getting ready to scoff? Remember: the headphones world’s high end now sees numerous headphone models tipping US$3000.

I also learn that many of the MH40 and MH30 are sold as gifts (for others). “How do they rank against Bose?” is the second most common pre-purchase question. At number one, “Do they have noise cancellation?” (No, but with a proper seal around the ear, noise isolation is well above average). This points us at a drawback: a potential lack of specialist knowledge in the retail assistant and an inability to compare to rival brands.

For those buying for themselves, a demo station is provided. A Sony HAP-S1 – server, DAC and amplifier (not for sale) – let’s the headphones speak for themselves. The music selection panders not to audiophiles. On rotation are cuts from the Jesus & Mary Chain, Suicide, Bjork and Dave Brubeck among others.

Getting his headphones out of traditional outlets and into fashion stores is no flash in the pan for Jonathan Levine either. My visit to Harrold’s took place a full year ago but a quick phone call to the Melbourne store this week confirmed that the collaboration between Harrolds and Master & Dynamic remains as robust as ever.

Perhaps more audio companies should consider following suit. As someone famously once said, “Wake up, time to get out of hifi!”. 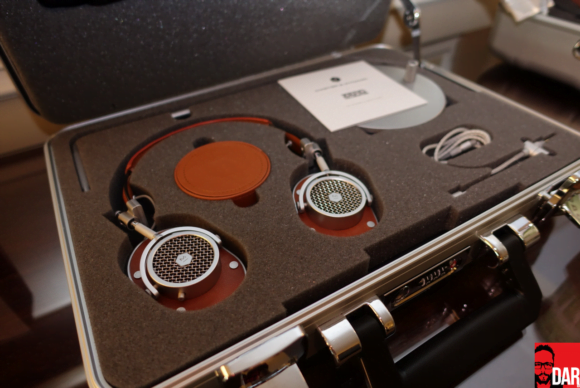 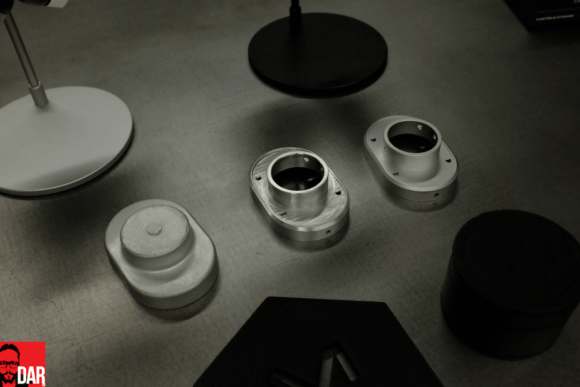 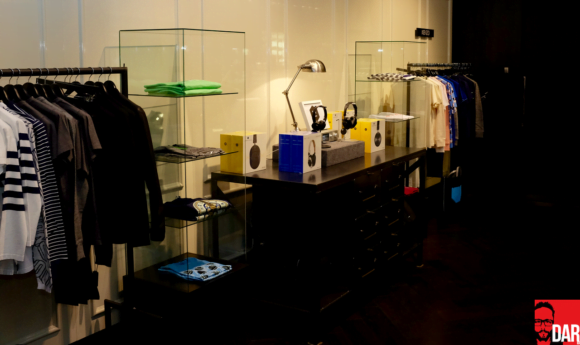 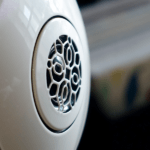 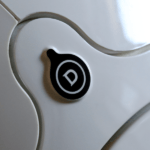