October 2015. How to launch an audio product? Announce first and then dispatch review units once the initial hooplah begins to tail off? Or issue review units ahead of launch date and have the ensuing coverage serve as its own proof of life, hopefully piling on the praise, once the embargo lifts?

For the introduction of their Mojo DAC/headphone amplifier (US$599, £399, AU$899), the UK’s Chord Electronics opted for the latter approach’s bigger bang.

Ahead of its London Shard launch event, the Mojo review unit arrived with press release and a draft of the Powerpoint presentation to be given by CEO John Franks’ at the event dinner; a tidy bundle wrapped in an embargo-sealed bow.

The catch? Three days lead time – woefully insufficient for a proper review treatment. Instead, come the big day, a news announcement with fleshed out back story would stand in for reporting directly from the London event. Review notes would be added in the days that followed…

The stage was set and the cast assembled. The director? Yours truly. Plot twists and listening notes would spill in real time.

The Powerpoint continued: “Everyone always carries a phone. Just add a Mojo to that phone and wow! The performance is breathtaking! Musically and technically it is the best mobile DAC there has ever been!”; a message driven home by a fist-pumping poster that read “POWER TO THE PEOPLE”. 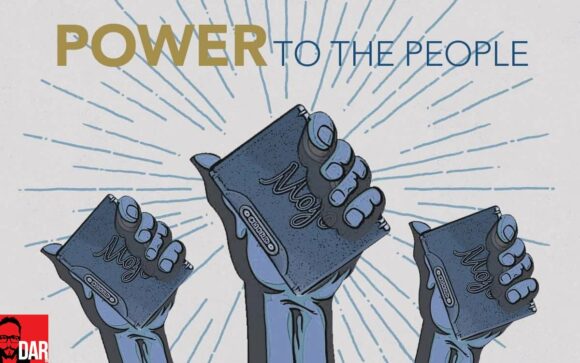 The Mojo was not only the British audio company’s most affordable DAC to date but also the least expensive offering to feature Rob Watts’ FPGA-coded WTA filter, in the Mojo refined to accommodate 768kHz sample rates, to sound a shade smoother and to offer lower noise than the already mightily impressive but thrice costlier Hugo.

With smartphone device deployment cast deep and wide at the launch event and in supporting promo materials, the target market arrived fully spelled out. Reviewers would be left to judge how effectively the Mojo might meet its heavily inked promotional brief. In other words, how would newcomers, and not only your average audiophile, set about adding a Mojo to their smartphone? What might they think of its sound and ease of application? How would Mojo compare to similarly intended (and priced) products?

With the Mojo’s intent for a broader democracy – better portable sound quality for the masses – how about comparisons to a portable player (Astell&Kern’s AK120) and dongle DACs from Resonessence Labs and AudioQuest that could, with select Android devices, be deployed as an audio appendage?

The first DAR response came in the form of three videos with a post title that polished clear its intentions: “For absolute beginners: the Chord Mojo on video”. After that, initial thoughts on its SQ and how it compared to rival units spilled forth.

An email was dispatched to Rob Watts enquiring after a technical matter. Watt’s clarification came back within hours. So too did a grumble:

“You are completely missing the point about Mojo – it is a reference class DAC with a tiny price tag. If we were to put it in a 20kg box and charge 60,000 USD reviewers would be wetting themselves over its sound quality and technical performance.

“You want to compare it? Put it up against a dcs Vivaldi and judge it honestly without preconceptions to price and size.”

Copied in, Franks piled on:

“This is no cheap simple product inside its case. Please go back to it. This is about the most important design we ever developed.”

Say what now? Mojo’s primary (and thus far only) intent had been clearly communicated as smartphone appendage – neither price nor promo alluded to high-end, main system playtime.

Time to push the gear stick into park and grab some fresh air.

Franks would later to confess to a case of over-protective parenting but it underscores the importance of a manufacturer having its promotional angles drawn before going to market, doubly so when review commentary is likely to first follow those lines of sight.

February 2016. In the intervening four months, the Mojo has me convinced that it is the most effortlessly detailed sounding DAC available right now for <US$1K. However, we can’t just leave it there. In the spirit of Franks’ earlier request for revisitation, let’s dig a little deeper:

1. The Mojo had already dismissed the in-built headphone output of the iPod Touch where, for once, the ‘night and day’ cliche applies. The Mojo’s SQ also trounces that of the Samsung Galaxy S5. Time has since shown that it also aces the headphone output of an iPhone 6+.

2) The Mojo’s presentation is lit-up such that it takes the listener down down-to-the-bone on his/her music selections. Think: more MRI, less X-Ray. Does this make it the best DAC in its class? That depends on partnering gear. An amplifier already sonically high on caffeine will see its jump factor multiplied whilst some tubes bring a thickening agent.

3) On headphone pairings that play counterbalance to the Mojo’s caffeinated pep, the HiFiMAN HE-1000 come off better than the Sennheiser HD800. Similarly, the Master & Dynamic MH40 are preferred to the OPPO PM-3 and the Sennheiser HD650 over Beyerdynamic’s (1st Gen) T1. My cost no object preference returned an unexpected result: the Mojo sounded most balanced of all with a pair of AudioQuest NightHawk in tow.

4) The NightHawk nicely offset the the Mojo’s only real weakness: a slightly undernourished tonal body; it’s not the meatiest player in town, but only properly noticeable when stood off against the warmer, thicker, more congealed Multibit Bifrost from Schiit. And even more so when contrasted by the comparative cornflour of the Aqua La Voce S2. Mojo lays recordings bare, deformities and all. The Schiit and Aqua are more forgiving (veiled?), particularly the latter. Then again, no D/A converter other than the Mojo packs a headphone output.

5) “Competes with DACs two or three times the price”. A largely unhelpful phrase…until we learn just how well the Mojo’s SQ stands up against its predecessor, the Hugo. The DPLL that reduces jitter and Class A output stage are the same across both Chord models and A/B-d in two different systems, I can barely pick ‘em apart. Watts’ code sees the house sound remain fully intact, so much so that only those who insist on RCA outputs, a standard RCA coax socket or a quarter inch headphone jack should consider spending the extra cash on the silver machine. IEM users should lean toward Mojo – its noise floor (hiss) with Campfire Audio’s Jupiter is markedly lower than Hugo.

6) Also putting a firm tick in the Mojo camp is the absence of a separate wall charger previously mandated by the Hugo. A 5V 1A feed – like that which spills from your average PC – can refuel the Mojo’s internal battery by way of any micro-USB terminated cable. That same cable can serve double duty as DAC leash. The Mojo’s USB ports aren’t recessed like the Hugo so there’s no need to shop around for a cable with a low profile micro-USB plug. 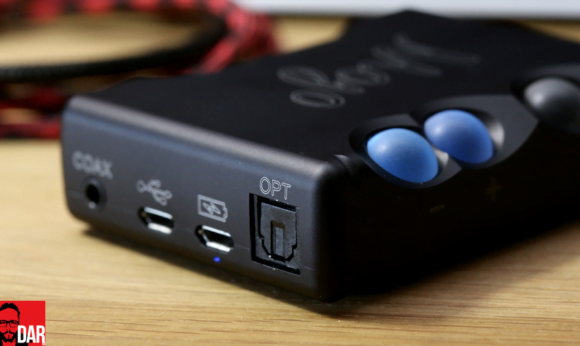 7) It’s Mojo’s Toslink input that’s of use to Astell&Kern owners, especially the original AK100 and AK120 whose ample metal belly sees zero screen real estate obscured when the Mojo is rubber strapped to its back. You can’t say that about second generation units. Or AK240. Or AK380.

8) Piling on the puzzlement, we don’t see effective strap-on adoption by the majority of smartphones either. Rubber hoop the Mojo to any iPhone or Android device and its screen becomes unusable. Only those prepared to pocket/bag the Mojo as a separate device – or use it a separate device whilst stationary on train or plane – will realise full mobile joy.

9) For this user the performance/portability sweet spot is found when connecting Mojo to a tablet running a streaming service where we get bag-ability without resorting to Samsung/Asus/etc. or Apple device’s hugely inferior headphone output.

10) Can you see where this is headed? Into a two-channel system, just as the Hugo went before it, largely in spite of its manufacturer’s intentions as portable device. Isn’t that why Chord brought the Hugo TT to market?

Connect Mojo to a PC or Mac via USB at one end and have a 3.5mm-to-twin-RCA cable feed an amplifier at the other. Those with more than one USB port available on the host device can have one serve as ongoing battery trickle-charger and one as digital audio deliverer.

11) Those with a stock-standard Sonos Connect are strongly advised to lasso their streamer to Mojo using Toslink. Its coaxial output coats music with a metallic sheen that’s hard to ignore during longer listening sessions.

12) Insist on coaxial? Your standard RCA-to-RCA digital interconnect is useless here. A Chord Electronics representative confirmed at CES what many had already assumed: the Mojo case is too shallow to accommodate an RCA socket. In its place, another 3.5mm socket. You won’t find pin assignment in the Mojo manual but according to Watts: “Gnd is Gnd, the tip is digital input”. Stephanie Casey at Zu Audio supplied yours truly with a Mission S/PDIF cable terminated at one end with a 3.5mm TRS jack and RCA at the other and it works flawlessly. 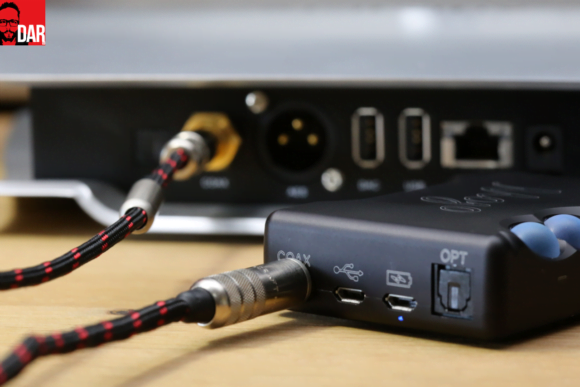 13) A question about the issue of possible double-amping is what precipitated Watts’ previous dissatisfaction. if someone were to use the Mojo as a standalone DAC are they in effect ‘double-amping’? That is, does the headphone driver inside the Mojo remain in play even when started in line level mode? (For a full 3V, power on the Mojo with both volume buttons depressed).

Watts’ reply: “It has an identical architecture to Hugo. Conventional DAC’s have two I-to-V converters, differential-to-single ended converter, followed by a headphone buffer. That’s four active gain stages plus a lot of passive components to do the filtering. All this complexity means poor transparency and a harder sound quality.”

“Mojo on the other hand has a single gain Class A stage with enough current to drive headphones directly. This design is so successful in SQ and measurements I now use it even when you do not need the large 0.5A RMS output currents. So there is no extra stage, you are not double amping.”

That makes the Mojo doubly useful as a standalone DAC in a main system where deployment runs contrary to the manufacturer’s design decisions – no RCA outputs – which assisted in realising a marketing emphasis that plays heavily on the unit’s portability.

The Mojo’s square aim at the smartphone market is (was) probably more about smartphone owner numbers than meeting mainstream standards of practicality. The Kent-headquartered company have reportedly sold 12,000 Mojos since its October launch. Them’s big numbers in the context of the audiophile niche.

Pointing us at the answers to “Why?”: the Mojo’s sonic prowess is so far ahead of 99% of the competition at its price point that sales figure success like this might well be expected. What IS impressive is that Franks and Watts have achieved this in spite of the unit’s impracticality as a smartphone addendum for all but the most hardcore of head-fiers. 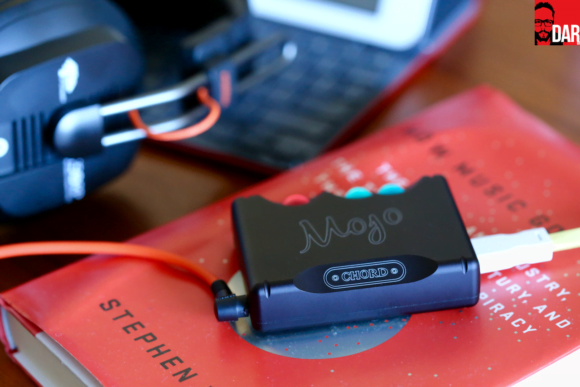