Critters 2.0. AudioQuest’s thumb-key-sized DragonFly USB DAC might not have been the very first of its kind but it ultimately came to be the poster child of USB dongle DACs to which all rival units would be compared. The 2012 original sold for US$249 but 2014’s updated DragonFly v1.2  married technical improvements to a US$100 price drop. More. For less.

Chief designer on the DragonFly project is one Gordon Rankin who does contract work for many tens of third party manufacturers but AudioQuest is his largest commitment outside of his own audio company Wavelength Audio.

More for less seems to be Rankin’s thinking behind DragonFly v1.2’s replacement: DragonFly Black (US$99), which looks a lot like the old DragonFly v1.2 but promises better sound quality for fewer dollars.

This new model swaps out the forerunner’s v1.2’s TAS1020B – the chip that talks to the host device – for a solution from Arizona’ Microchip Technology. Their 32-bit MX270 USB micro-controller reportedly offers several key advantages over solutions from Texas Instruments or XMOS:

1/ Analogue power supplies on the chip mean a more favourable noise profile. The electrical characteristics of the MX240 do not vary with the incoming sample rate. Like the DragonFly v1.2 that it replaces, DragonFly Black will decode up to 24bit/96kHz PCM.

2/ Lower power consumption. As per my own review, iOS devices red card the DragonFly v1.2 because of its thirst for milliamps being greater than one hundred. Android devices enforce no such disconnect but suffer faster battery drain as a result. DragonFly Black’s MX240 controller consumes 77% less power than the outgoing TAS1020B and up to 95% less than even the most power efficient XMOS options. The upshot is the DragonFly Black is fully compatible with all iOS devices – BYO Apple Camera Connection Kit – and any Android 4.1 device that also supports USB audio – BYO OTG cable.

(Side note: AudioQuest won’t be using the ‘OTG’ descriptor when they introduce their own Android USB audio cable down the line. Look for “Made for Android”).

3/ Firmware upgradeability. The firmware on the original/v1.2 DragonFly is locked in place at the factory. Not so the DragonFly Black; its MX240 chip is firmware upgradeable via AudioQuest’s forthcoming Windows and OS X apps. End users will be able to install performance updates and bug fixes, crucial to the more nebulous world of Android devices, as they become available via AudioQuest’s website.

Remaining unchanged are the unit’s dimensions (12mm x 19mm x 62mm) and analogue volume control but the decoder chip is new: out goes the 24bit ESS 9023 of yore, in comes the 32-bit ESS 9010 to which a minimum phase filter has been applied to give the listener “a more naturally detailed and dynamic” experience.  And yes, DragonFly black remains fully compatible (and driverless) with OS X and Windows devices.

The compromise with Black is a drop in output voltage from the v1.2’s 1.8V to 1.2V, effectively ruling out all but reasonably efficient headphones loads. That said, the DragonFly Black’s ability to serve as a line-level decoder before an integrated amplifier or pre-amplifier remains unchanged; you’ll just need to turn up the wick a little bit.

But that’s not all.

AudioQuest are also introducing the more powerful “hotrodded” DragonFly Red which not only promises greater control of tougher headphone loads but more audible “beauty and finesse” (their words). Red sports the same MX40 micro-controller and offers the same iOS/Android/OS X/Windows device compatibility but serves up a higher output voltage (2.1V) and 5db more signal to noise via a “superior sounding” 32-bit ESS 9016 decoder chip and 64-bit, bit-perfect digital volume attenuation. Yours for US$199.

On both models, adjusting the volume control on the host device will send proxy signals for changes to both Red and Black’s on-board volume controls.

You can take my word for it or watch Gordon Rankin and AudioQuest digital audio guru Steve Silberman introduce both Red and Black. I’ve condensed their 25 minute breakfast event into 6 tidy minutes:

How might this theory play out in the real world? During the presser, Rankin explained how AudioQuest headphone designer Skylar Gray ran a DragonFly Red with a pair of NightHawk for 32 hours and noted a mere 35% dent in his iPad’s battery life.

Mobile device compatibility on the new DragonFlys might not be a big deal to everyone but head-fiers will likely appreciate how this solution is (quite literally) millimetres from being an inline DAC/amplifier, deftly side-stepping the need to strap on a bulkier box (I’m looking at you Chord Mojo). Plug an OTG USB cable into your Android device or hook a CCK into an iPhone and connect either DragonFly Red or Black for portable audio that’ll sound considerably better than your phone’s headphone socket.

Moreover, these AudioQuest critters will really come into their own when Apple make good on their promise to rid the iPhone 7 of its analogue headphone output.

Both DragonFly Red and DragonFly Black are expected to ship late Q1 or early Q2. 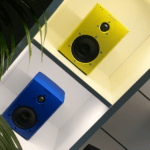 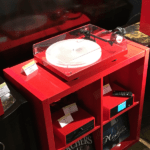