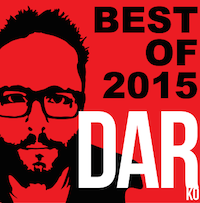 The longer I spend headed out to sea on a boat powered by audiophile thinking, the more I wish I could keep one foot on land where normal people go about their business, oblivious to webzines like DAR. I’ve written previously about the audiophile disconnect and the need for those already a long way from land to build a bridge back to the man in the street. It’s why in 2015 I championed the showing of properly affordable hardware at audio shows.

And now, at the end of the year, I’m reflecting on a few of my favourite products and experiences from the preceding twelve months. DAR’s ‘Best of 2015’ coverage will arrive in instalments. Possibly two, most likely three.

This first slice focusses on not only the more affordable end of the market (ergo bridge builders) but hardware that struck me as important in moving the audiophile game forward in more ways sound quality alone.

In no particular order…

Sonos recently introduced a radically overhauled Play:5 loudspeaker (US$499) – wireless streamer, DAC, amplifiers and drivers in a single box. I went for a listen three times at different local stores and on each occasion found it an impressive sounding beast; the new Play:5’s bass goes low but remains tuneful.

The catch? You’ll need two for stereophony proper and that pushes the entry fee to within two cents of a grand, well north of the superior sounding KEF X300A (US$799) whose coaxial driver alignment is better on both imaging and midrange articulation. The KEF’s top end isn’t anyway near as insistent as that heard from a pair of Play:5.

Sonos’ new trump card is Trueplay: a smart device app that measures the speaker’s output in the context of the listening room and tweaks its output accordingly (via DSP). I preferred the sound of Trueplay engaged during my three separate auditions of the Play:5. It dialled back the bass and in doing so gave vocals more breathing room. However, cymbals and hi-hats retained their strong presence. Trueplay doesn’t transform the Play:5 pair into something better sounding than the active KEFs (which three years since launch remain one of the most underrated pieces of entry level hifi). 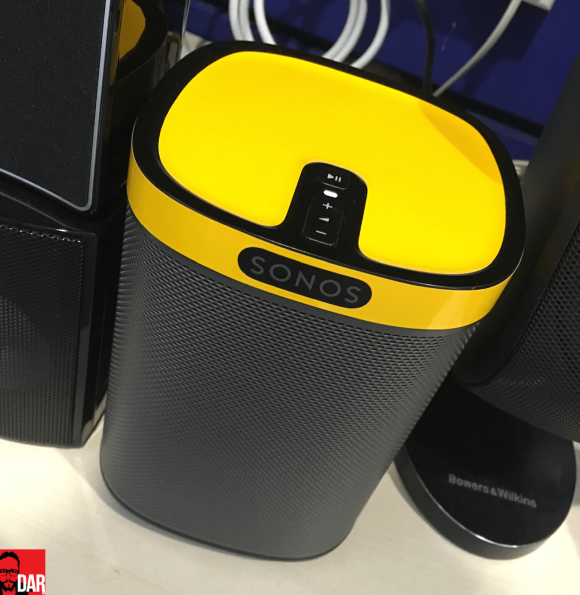 Even if some users don’t find the Trueplay-modified signal to their liking, it sends the message to (mainstream) users that a room’s acoustic make-up influences the sound of a speaker placed therein. That’s an important conversation to have and one that deserves greater priority than talk of hi-res formats.

Trueplay can also be applied to the Sonos Play:1. Again, you’ll need two and they sound excellent for the money; not as bright as the new Play:5. Where else can you get active loudspeakers with in-built streaming, D/A conversion AND room correction for less than US$500? Answer: nowhere.

You can’t take it with you. Money, that is. When Sony launched their NW-ZX2 digital Walkman at CES in January the mainstream press scoffed at its US$1199 RRP. “No sound quality is worth that much,” they argued in harmony. Have these commentators ever met an audiophile I wonder? Five months later at the world’s biggest and best audiophile trade show, Astell&Kern launched the AK380. Price? US$3500. Even the most die-hard head-fi-er would have to agree with Gizmag’s assertion that such pricing is ‘eye-watering’.

The good news for Sony was that Astell&Kern’s AK380 had made the ZX2 look positively affordable. I’ve no idea by how much the sound of the AK380 bests the ZX2. For the South Korean company’s sake it had want to by quite some margin. After all, the Sony DAP sells for almost a third of the price of the flagship A&K; offers Tidal, Spotify and Pandora integration courtesy of its Android O/S offering Google Play Store access; and houses a bigger battery (than the ZX1) to provides a whopping 30 hours battery life between charges. The majority of rival DAPs, even the AK380, only offer a third of that (at best). 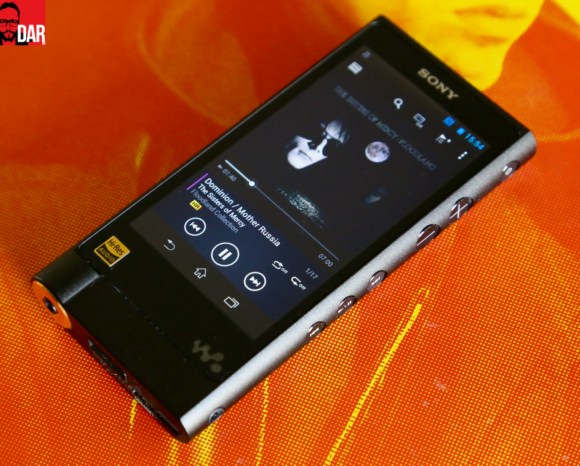 A more evenly-matched comparison pricewise arrives when Astell&Kern’s AK120 II is sat next to the Sony. Of the two I prefer the latter: the Sony goes further with detail excavation and doesn’t have the unmistakable thick mid-bass of the Astell&Kern.

Versus the ZX1 (US$699), the ZX2 adds microSD card slot, the aforementioned extension to battery life and, as if in concert with the additional in-hand weight, sounds fuller, richer and considerably less needlepoint in transient handling…but only after one of the most agonising run-in periods I’ve witnessed from any audio product. The second generation unit is therefore better suited to a broader range of headphones and IEMs. My only criticism is that the Sony sounds more ‘hifi’ than a Pono Player: think B&W floorstander instead of single driver standmount. But the Pono Player, for all its talents in lending music a certain sense of beauty, only clocks up six hours’ run time before its battery gives up the ghost; that’s woefully inadequate for long haul flights out of Australia. It’s 10 hours from Sydney to Tokyo, 12 hours from Sydney to Los Angeles. Portable audio is only enjoyable for as long as the battery lasts. Once it dies, a better DAC, headphone stage, hi-res encoding and/or terrific mastering job matter not a jot. You can’t (always) take it with you. Music, that is. Unless you have a Sony NW-ZX2.

I kickstarted my coverage of Chord Electronics’ entry-level matchbox with DAR’s first foray into video, showing how an average joe might connect the Mojo to their smartphone and in doing so introduce considerably better sound quality into their daily routine. After all, that was the thrust of both the Mojo’s launch event at The Shard in London as well as the promo material that accompanied the news announcement. Then came emails from Chord Electronics CEO John Franks and Mojo designer Rob Watts: I’d got it all wrong and that Mojo was in fact a piece of high-end hardware that competes with the dCS’s of the DAC world. A case of over-protective parenting perhaps but a situation that underscores the Mojo’s identity crisis. 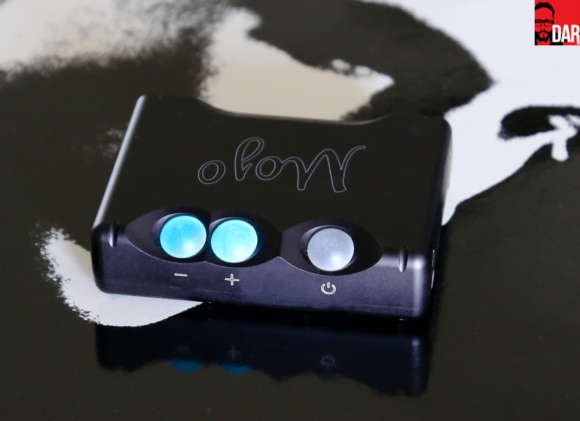 I just don’t foresee many folk strapping the Mojo to their smartphones when the rubber bands required to keep it in place must traverse the top and bottom of the touchscreen. However, that doesn’t mean the Mojo is DOA on application. Quite the opposite. It begins to come its own in quasi-portable scenarios, turning an iPad (equipped with CCK and Tidal or Spotify) into a digital front end with serious high-end cred.

How so? I couldn’t pick much of an audible difference between the Mojo and the box that kick-started it all: Chord Electronics’ thrice more costly Hugo. Like the Hugo, the Mojo eschews an off the shelf DAC chip in favour of an FPGA programmed by Rob Watts. The Mojo’s sound is big on detail and inner spaciousness; it offers an intergalactic space flight through your music collection. And also like the Hugo, where I see most users deploying the Mojo is not in headphone setups – although its 3.5mm output is seriously punchy – but in housebound two-channel systems. If there’s a sub-$1000 D/A converter that can get close to the deep sonic immersion offered by the Mojo, I’ve not heard it. This is THE goto device for any entry-leveller looking to take their listening experience to the next (err) level. The Mojo is probably best served with ancillaries that offer a little downstream tonal weight gain; a tube amplifier for example. “Bloody brilliant” as they say in the UK.

No other product in 2015 has given me so much hands on pleasure as this Pioneer DJ turntable. No, that’s not a nod to the Carry On films of yore (Brits will know what I’m talking ‘bout) but a reminder that a turntable must not only sound good but remain enjoyable in use. High mass and a sense of indestructibility puts a spike in the value for money quotient right from the unboxing. This unit tips the scales at 13kg.

As those in the know will tell you, the PLX-1000 is another Hanpin-manufactured derivative of the Technics SL-1200 (discontinued in 2010). The Chinese company has since made SL-1200 clones for Audio Technica, SPEC Corp., Reloop and, the company that brought this Super OEM design to life, Stanton.

Being a turntable from Pioneer’s DJ division its build quality is second to none and offers an embarrassment of conveniences that cast belt-driven, low mass rivals into the shade. The removable headshell means upgrades to it and/or the attached cartridge are a snap.

Then there’s the direct drive topology, underpinned by a high-torque motor. Watch the strobe for a few seconds and you’ll the speed of the PLX-1000 is rock solid. You can’t say that about a Rega RP-3. Unlike the Rega, the PLX-1000’s platter starts and stops on a dime. That’s a long way from the 20 seconds required by the Pro-Ject Xtension 10 to get up to 33rpm. Even though the Pioneer doesn’t sound as eloquent or majestic as the Austrian, it’s better suited to people in a hurry to drop the needle. That said, the Pioneer offers a weighty, driving sound that’s considerably better than the Pro-Ject Debut Carbon. 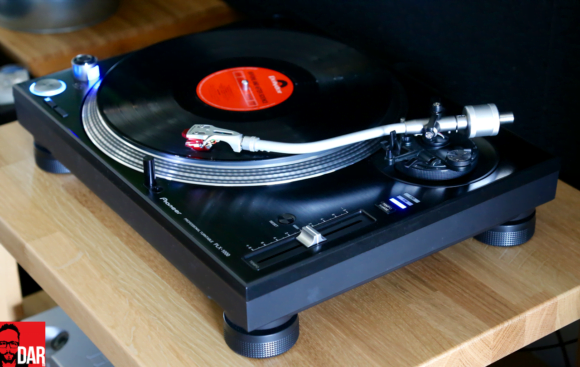 Since its launch, the PLX-1000 has disrupted the audiophile community. Audiophilliac Steve Guttenberg and Stereophile’s Herb Reichert, whose Brooklyn neighbourhood proximity means they often share thoughts and gear, have both given this ‘table a rave. On a more anecdotal level, I’ve seen some forum commentators wax lyrical about how they prefer the sound of the Pioneer to a far more costly audiophile-focussed VPI or Thorens. We shall see…

I’ve since purchased a Rega RP6 and a Rega Exact cartridge so in time we’ll find out how just how the Pioneer + Dynavector 10×5 stacks up. If I can source an A/D converter from m2Tech or Ayre Acoustics, I’ll share audio samples as per Michael Fremer’s Analog Planet.

In the meantime, if you find yourself hesitating on buying one of these, don’t.

What the Chromecast did for video, Google hope the Chromecast Audio will do for audio: make digital streaming easy and super-affordable. Connect the latter’s 3.5mm analogue output to the back of an amplifier or active loudspeakers and you’ve just added streaming compatibility to your system for a paltry US$35. Google’s smartphone app initiates the connection between streaming service and the Chromecast Audio device.

Of course, no-one’s really expecting the Chromecast Audio’s internal DAC to pass audiophile muster. Still unavailable down under, I’ve yet to see even see one, let alone take a listen (hence the stock photo). That’ll change next month at CES but in the meantime know that the 3.5mm socket doubles as an optical output for direct connection to an external D/A converter. Clip a mini-Toslink adapter to one end of an existing optical cable and you’re off to the races with a better deal. 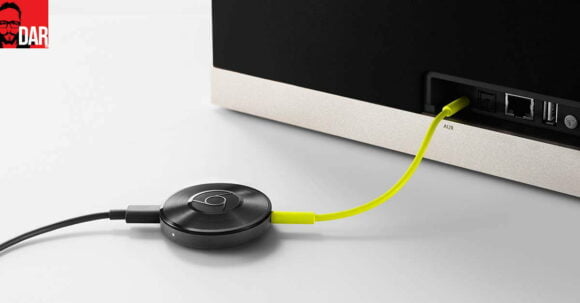 I foresee the Chromecast Audio doing price-commensurate time with the forthcoming AudioQuest Beetle or a Schiit Modi Ubeer. Either pairing will threaten a Sonos Connect’s sound quality and convenience but without getting anyway near it on price. The Beetle adds Bluetooth streaming to the mix for when wifi access isn’t appropriate. The Schiit on the other hand offers an RCA-fuelled analogue output.

Oh – and to those who think that the Chromecast Audio is a toy for kids who listen to lossy streams of mainstream rubbish, Google today announced full 24bit/96kHz and multi-room sync support that’ll land on each dongle as a software update.

Burning airlines give you so much more. #brianeno

📰 NEWS 📰 A nice bit of #Futurefi from @roksa