Einstürzende Neubauten. Not easy to say, even harder to play. Unless you’re John DeVore to whom I was about to give a 12″ EP by this same German outfit but one given extra layers of avante garde by semi-industrial techno pioneer Ali Wells (aka Perc). Easy listening it is not. Alluding to what lies beneath, the first of four tracks is called “Sado-Masodub”. It’s a bona fide room clearer, even when heard in the context of Zu Audio’s more adventurous music selections.

The first order of business for Sunday morning then was to drop into the DeVore Fidelity room, hand over the wax and then leave. Cut and run. And that I did. DeVore’s room was chock full of attendees collectively immersed in a choral piece. It wouldn’t have been appropriate to puncture the stillness with my voice, let alone German/UK industrial techno.

My brilliant mistake was to stop by Vinnie Rossi’s room on the fifth floor on the way up.

“What music you got there, John?”, asks Rossi.

“Nothing. Well, actually, it’s not nothing. It’s abstract, industrial techno. Reworkings of a German artist by UK techno producer Perc – it’s not for here.”

And this is the great thing about Vinnie Rossi. He’s as bored with the same old same old as the rest of us but cops it because he knows it’s a necessary evil for promoting hardware to the prevailing demographic seen at audio shows.

The Perc 12″ however – it’s just plain evil. Vinnie doesn’t extend the invitation to drop the needle on wax provided by yours truly to stick it to the man. He just wants to hear something different.

Only one or two room attendees bail as the first track draws to a close; so Rossi lets the record groove through to the A-side’s run out. It’s a million miles from Van Morrison. Fair play, Mr Rossi, fair play to you.

For vinyl heads keeping score, the turntable in play was an Acoustic Signature Challenger MK3 with TA-1000 tonearm fitted with a Dynavector XX2 cartridge. Phono stage and pre-amplification duties were handled by the modular LIO (reviewed here and here. Still to come in Part 3 will be commentary on the Autoformer Volume Control module, the DAC module and the remote-control configuration of the phono stage module. 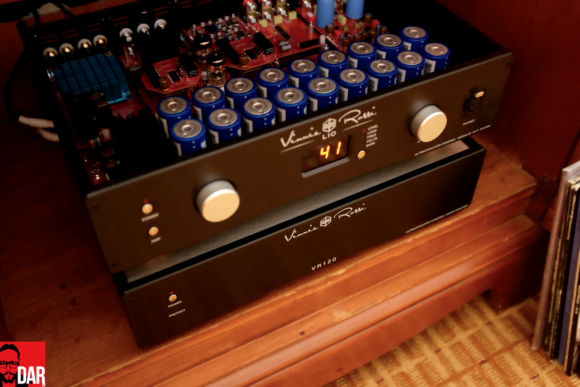 The sound at RMAF 2015? Authority without a hint of aggression. Keeping Einstürzende Neubauten & Perc’s wall of sound from collapsing under its own weight was Rossi’s new VR120, a power amplifier for loudspeakers too staunch to accommodate the LIO’s seemingly humble (but not!) 30wpc MOSFET output module.

And like the LIO, all go-juice comes off the grid via Rossi’s PURE DC-4-EVR ultracapacitor banks. Mains power charges one bank whilst the other powers the circuit. Wave goodbye to power conditioners. Bid adieu to regenerators. Sayanora deluxe power cords.

The VR120’s input stage is Class A JFet. The XLR/RCA connectors all come from Cardas. Ditto speaker binding posts from which the VR120’s MOSFETs push 120wpc into 8 Ohms or 225wpc into 4 Ohms.

In Denver that meant the VR120 made tasty toast of Harbeth’s 40.2 loudspeakers, Rossi’s ultracap power supply and its twin towers – super low output impedance and high current delivery – made light work of any impedance dips (should they present).

Keeping the patriotism factor high, both LIO and VR120 are hand built and sold by Rossi from his Connecticut workshop. Each unit is backed by a 10 year warranty. 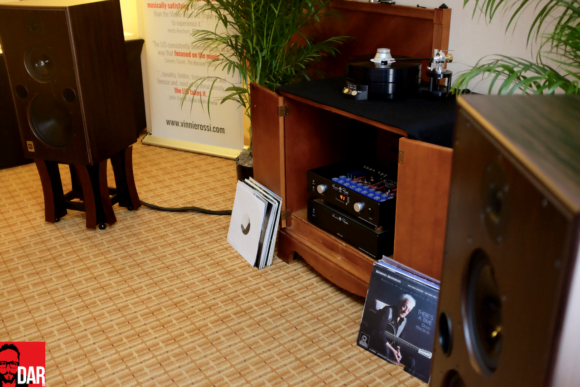 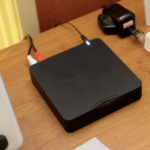 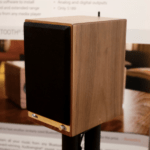