Event-U-ally. Shows like Denver’s Rocky Mountain Audio Festival, Orange County’s T.H.E. Show Newport Beach and Munich HighEnd are great places for the curious to poke their head around the curtain and peer into the world of high end audio. It’s where hundreds of the world’s most talented engineers and manufacturers show off their latest and greatest wares and without the buy-it-now pressure often associated with high street stores. A few manufacturers incentivise the credit card drop with show specials.

Even for seasoned audiophiles, these shows provide a highly concentrated collection of bleeding edge developments; a hint of what’s possible from abundant time and money.

And there’s no getting around it either: just like buying a sports car or luxury timepiece, good sound costs money.

The audiophile journey usually starts with a pair of loudspeakers. Then a power amplifier to drive those loudspeakers to their full potential. Then a pre-amplifier for source selection and volume attenuation. Alternatively, an integrated amplifier brings both pre and power under one roof.

After that, the sources themselves.

A digital front end might comprise a music server (or consumer-grade PC for those on tighter budgets) and a D/A converter that does exactly what its name suggests: convert digital (‘D’) to analogue (‘A’).

A turntable’s output is of a lower voltage than a DAC’s and therefore requires an outboard phono stage to amplify the signal to a (line-)level that the pre-amplifier and then power amplifier can work with.

Our system builder isn’t done yet. Next come USB cables, analogue interconnects and loudspeaker cables to stitch it the playback chain together.

Live in a high density area where mains power is far from optimal? Better clean it up with a power conditioner/regenerator and deluxe power cords. 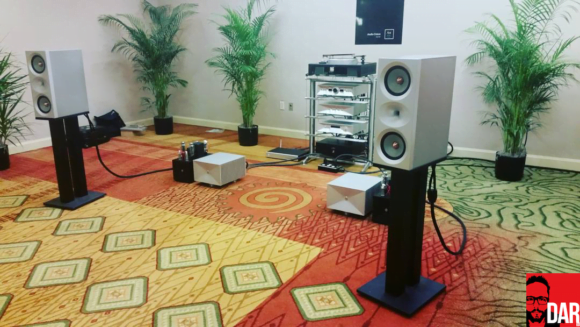 That’s not the end of it, not by a long shot. A rack not only helps present the system as an attractive whole but it can minimise vibrations that negatively impact each component’s performance and, therefore, sound quality.

Are we there yet? Not quite. Sound quality optimisation demands the room in which the system sits be acoustically treated or meet with digital domain DSP correction. This is where the likes of DEQX, miniDSP and Dirac enter the conversation.

Spend a day or two roaming the halls of a high end audio show and you’d be foregiven for thinking that the audio industry cares not for your living space.

The majority of listeners don’t have the luxury of a dedicated listening room but that doesn’t stop the average show setup from thumbing its nose at modern living practices. Installing an audio system – numerous metal boxes and wires, bass traps and absorption panels – rains blows down upon the family room aesthetic.

To even a casual onlooker, getting great sound means accommodating considerable physical intrusion to your living space. That’s the broad message communicated by high end audio shows. Could this be the consumer’s (quite literal) biggest barrier to entry?

Then there’s the time/energy suck of having to consult with the Internet, manufacturer or local dealer on component matching. Even when viewed by the cash rich newcomer, mixing and matching high end audio separates can be an expensive game of pin the tail on the donkey. The blindfold is baked into the game’s design. No wonder the time poor stay away.

Beyond the walls of the audio show, the spacious family homes capable of physically accommodating the multi-thousand dollar, multi-box systems seen at every turn are the exception, not the norm.

No-one lives forever. High end audio must recalibrate its sights and consider what the audiophile-mainstream nexus might look like in ten or twenty years’ time. 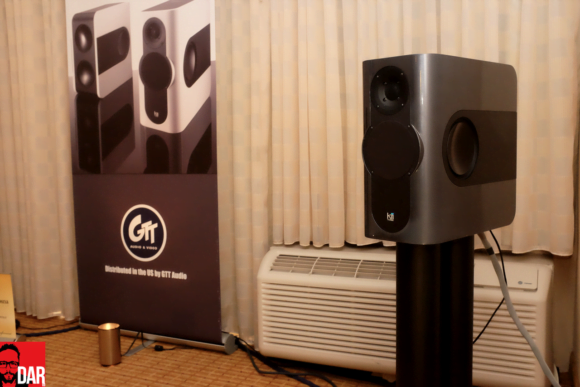 The twenty- and thirty-somethings living in house shares and studios – or an apartment or small house if they’ve progressed further up the financial totem pole – are the audiophiles of tomorrow. What of their reaction to separates, kabelsalat, hifi racks and the never ending component churn generated by thoughts of “What if”?

To this fella’s eyes and ears, the future is brightest for those bringing active loudspeakers to market. They collapse box count and strip loudspeaker cables from the scene. One amplifier per driver matched by the manufacturer to accommodate impedance variations up and down its frequency range – you don’t get that from a passive lassoed to a self-selected amplifier. Add DSP to divvy up the signal and perhaps accommodate room correction.

Hailing from Belgium, Putzeys is the inventor of the UcD (Universal Class D) switching amplifier that, manufactured under the Netherland’s Hypex banner, brought him considerable industry recognition/admiration.

And it’s these amplifier modules that work the engine room of the Kii Three. Six drivers – mid/bass and tweeter up front, two bass drivers at the rear, and one on each side – and six latest generation Ncore amplifiers, all housed in an injected-moulded polymer box. One might refer to the Kii Three as a large-ish active standmount speaker. Just add pre-amplifier and source.

But this is Bruno Putzeys and he’s taken active loudspeakers to the next level.

The theory behind the Kii Three’s design goes like this: midrange and higher frequencies by and large move only in the direction of a loudspeaker’s aim but bass frequencies radiate in all directions – it’s why subwoofers are often referred to as omni-directional. The narrower the loudspeaker’s front baffle, the higher the frequency threshold of its omni-directional emissions. 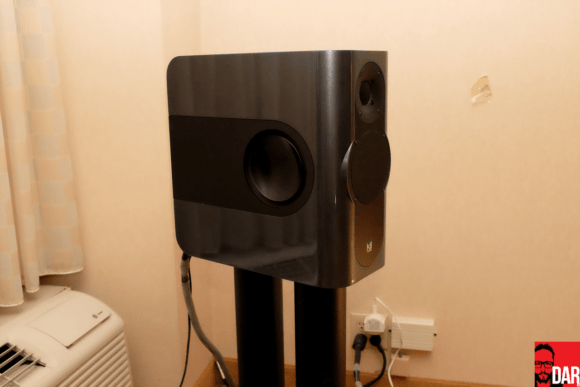 The upshot with an ordinary loudspeaker – even an ordinary active loudspeaker – is that the listener hears those lower notes not once but twice: the fundamental and then, later, its reflection from a side or front wall. These reflections can (and do) mess with imaging and midrange clarity.

In solving this real-world reflective problem, Putzey’s onboard DSP exploits the Kii Three’s rear and side-firing drivers to (phase) cancel sideward- and rearward-bound frequencies, predominantly those below 250Hz. Low/er frequencies that would otherwise meet the front or side wall and then reflect back into the room…delayed. The DSP on each loudspeaker is switchable to accommodate the Kii Three’s standing in free space, near a (front or side) wall or in a corner. In case you’d not guessed it, this is no master-slave two-fer. Each Kii loudspeaker requires connection – and therefore proximity – to mains power.

This results in the Kii Three’s cardioid dispersion pattern. Car-what-now? In less technical terms, it means a downturn in the amount of low frequency information headed sideways or to the rear of the loudspeaker and therefore a downturn in reflective interference. Clever, huh?

Srajan covered the press announcement and Munich High End launch in May as part of his KIH column here and here. The German launch venue was a recording studio but what better environment to show off the Kii Three’s real-world capabilities than a hotel room.

RMAF 2015 would host the Kii Three’s Stateside debut for which Putzeys would also be present. When I dropped by early on Sunday morning, he was already well into explanatory conversations and music demos. I didn’t dare interrupt, instead looking across to the front wall. This, friends, is high-end minimalism!

Unable to get a shot of rear underside connectivity, readers are advised that each Kii Three accepts either digital or analogue input. (I remain a little hazy on the specifics of signal pass through). 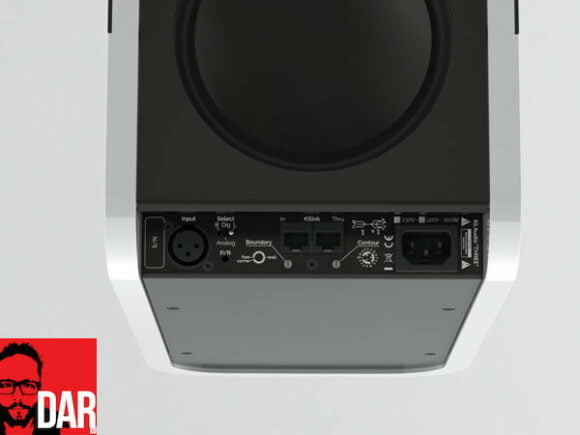 Spending a few minutes up close – and feigning camera flash adjustment – was simply to get a handle on the magnitude of cornered standing waves. Conclusion: very few. The Kii Three performs technically as described, radiating less to the rear and side as a standard speaker might.

Out in the middle of the already busy room this translated to a soundstage the size of a house. A house in a hotel room with real, honest-to-goodness depth. A seriously impressive result given the dearth of acoustics treatment so commonplace elsewhere.

To analogue idealists poo-poo-ing the digitisation of all incoming signals, without which DSP cannot work its magic, the Kii Three asks, “Which has the bigger impact on in-room sound quality: the room’s front and side wall reflections or the ADC-DSP-DAC process?”

The Kii Three is the pragmatist’s choice – audio rigged for modern living.

Putzeys game is one of high-end subtraction. In return for your recognising that his engineering smarts are better than yours, he takes away speaker cables, box count, side and rear walls as well as your ability to choose amplifiers.

The inability to choose is a complaint levelled at active loudspeakers by audiophiles. A complaint that the pro-audio and recording studio industry gave up on a long time ago (if they ever had it at all). A complaint that’s as outmoded as the curtains and carpets at the Denver Marriott.

RMAF’s host hotel is set for refurbishment over the next twelve months with the completion slated to arrive a mere six days before RMAF 2016 kick-off. Talk about down to the wire!

Between now and then you’ll see a good deal more active loudspeaker coverage on these pages. DAR HQ’s hardware detail has seen significant overhaul these past six months: the Zu Soul MKIIs have been replaced by a pair of (active) Adam Tensor Delta, the KEF LS50 have been boxed up and stashed for a rainy day with (active) Audioengine A5+ handling desktop and bedroom.

It also begs the question: if the Marriott can modernise its outlook, isn’t it time (more of) the high end audio world brought its thinking up to date? 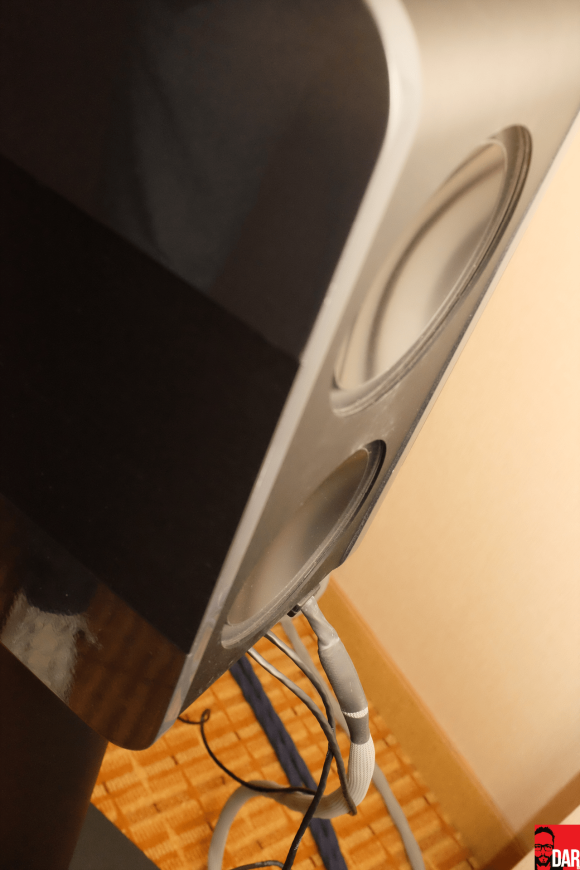 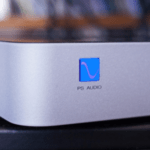 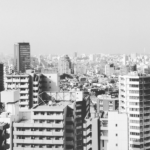