Those setting down (active) monitors on a (work) desk must resolve the issue of speaker height/angle – having each speaker fire sound directly at one’s ears is critical to proper soundstaging and tonality. A similar rationale sits behind in-room stands.

Getting speakers up off a desk surface has additional benefits: it dials down the interference of the desk’s first-reflections and prevents the desk from vibrating, which can be an impossible distraction. Anyone owning a cheapo IKEA number with corrugated internals will know what I’m talking about: with speakers placed directly on the desk there’s a whole lotta shake, rattle and roll.

The poor man’s DIY fix is a stack of books under each loudspeaker; sometimes it works, sometimes it doesn’t. One things for certain: it’s far from an attractive solution. Booklift aside, (coupling) spikes can help and some pro audio stores even offer (decoupling) foam wedges that isolate the loudspeaker as well as tilt it backwards.

Offering another solution that won’t break the bank is Canada’s IsoAcoustics, fronted by founder Dave Morrison who once was instrumental in building studios for the Canadian Broadcasting Corporation.

IsoAcoustics offer a range of stands for loudspeakers of different sizes and weights. A pair of their ISO-L8R now ships with each pair of Dynaudio’s BM MKIII actives. Trust this Danish loudspeaker manufacturer’s pro audio division to get with the programme first.

In the world of home audio/philes, where audio is less about work and (supposedly) more about ‘fun’ there exists a greater preponderance towards skepticism. That’s odd when one considers the role of the speaker stand with traditional ‘bookshelf’ speakers as nigh on irreproachable.

In July 2014, curiosity got the better of me. Michael Lavorgna’s positive review over at AudioStream helped seal the deal: I purchased a pair of IsoAcoustic’s entry-level ISO-L8R155 stands. Catchy name, huh? At US$99/pair the risk was suitably low.

Upon arrival, the ISO-L8R155 were given a brief first run. Interceding between KEF’s superb X300A Wireless and an IKEA desk they returned a “large dollop of low end control” to the coaxially-arranged actives, After which the IsoAcoustics stands were promptly reboxed and tucked back into a cupboard marked ‘Soon’. A cupboard that would later be known as ‘Oops, I forgot about these’.

Memory jog came almost a year later by way of a visit to IsoAcoustics Halle-based stand at the Munich High End Show where Dave Morrison could be seen conducting live-demos of IsoAcoustic’s new Aperta stands. That name, Italian for ‘open’, is more memorable. The newbies sell for US$199/pair.

The Aperta’s aluminium frame maintains Morrison’s preference for lighter materials. “Our intention is not to colourise,” he says. An design objective that echoes AudioQuest’s “First, do no harm”.

In chatting with Morrison I learn that each of IsoAcoustic’s desktop stands are designed to do more than simply isolate one’s loudspeakers from the surface onto which they are placed. Getting them up closer to ear level – and away from the surface below – reportedly mitigates some of the smear caused by first reflections that converge in the centre of one’s desk. The Aperta are also tilt adjustable.

However, for the Aperta’s Munich show demo there was no desk and no tilt was required.

“One more thing to note: the Aperta are biased to move in the direction of the transducer,” added Morrison.

Two pairs of Focal 906 standmounts were placed next to each other on traditional speaker stands. One pair of speakers was elevated further by foam slices and the other by the Aperta. Bringing the A/B swithability was the dual speaker outputs of a NAD C356BEE integrated amplifier. 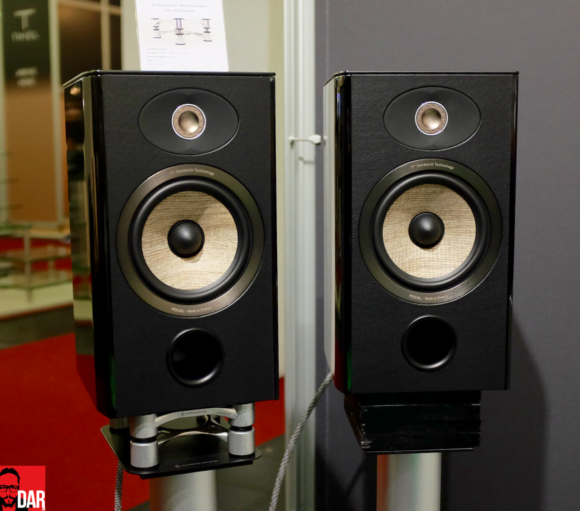 Steely Dan’s Gaucho might be as cliched as music choices get in audiophile circles but it’s an album I refuse to have ruined by its audio show ubiquity. I pick my moments. This was one of them.

And it doesn’t take more than a minute or so of switching back and forth between the Focals to pick the superiority of the Aperta-supported pair, even with the show’s din doing its level best to audibly override Morrison’s demo. I noted a serious uptick inner-spaciousness from the Aperta. In other words, better separation and layering.

On the ensuing classical piece, a lyric from Tom Waits’ “Time” – “And the rain sounds like a round of applause” – saw itself mentally inverted. The applause as reproduced by the foam-supported Focals connoted rain hitting a metal roof. The Aperta-d pair did not.

Had I doled out a ‘Best in Show’ for my own Munich High-End experience in 2015, this would have been IT – no question.

I pictured the KEFs back at home; but this time sat atop the IKEA Expedit shelving that, like many other budget vinyl-philes, houses my record collection. I then transplanted that though to a pal’s entertainment unit where speakers sit either side of a TV. I could almost hear the better-locked image focus brought by a pair of IsoAcoustic stands.

Back in Sydney with heavier-topped work desk and Audioengine A5+ fresh out of the box, a down home confirmation opportunity presented. The ISO-L8R155 were unboxed and the shorter of the two sets of steel support poles deployed, here front loaded with spacers to ensure a chin-up pose from the Audioengine actives. IsoAcoustics’ intention here is similar to that of their Aperture stands: to free-float each speaker. 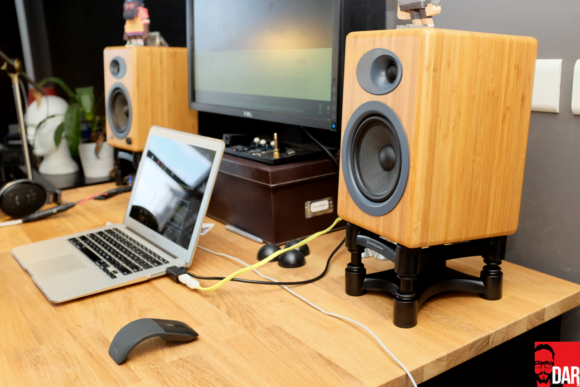 Four rubber, inverted-dome feet on the (plastic) lower frame maintain each stand’s rock solid positioning on the desk’s surface. A similar material configuration found on top of the upper frame does the same for the speakers themselves.

And like that which I witnessed in Munich, this less costly model easily lives up to the marketing blah-blah-blah. Decoupled from the desk and firing upwards towards this fella’s noggin, the presentation is more holographic, better separated and more immersive.

Think you can get the same result from a DIY solution? By all means have at it.

Put simply: applying an improvement of greater magnitude than a really good loudspeaker cable upgrade, hearing first hand what the IsoAcoustics stands can do, listening to desktop speakers without them borders on the intolerable. Enough said, ey.
Owners of speakers both larger and smaller than the Audioengine A5+ are covered too. This Canadian company offers 130 and 200 variants for US$79.99 and US$149.99 respectively. 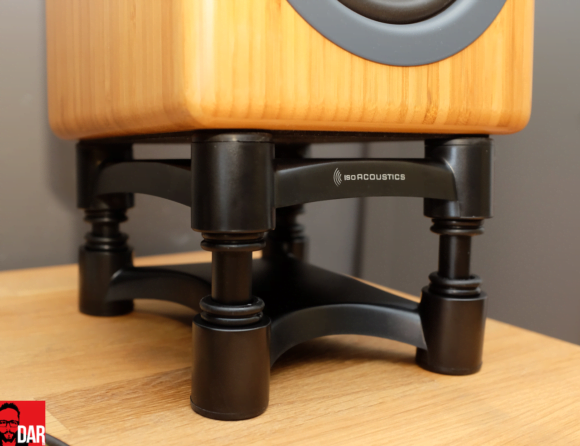 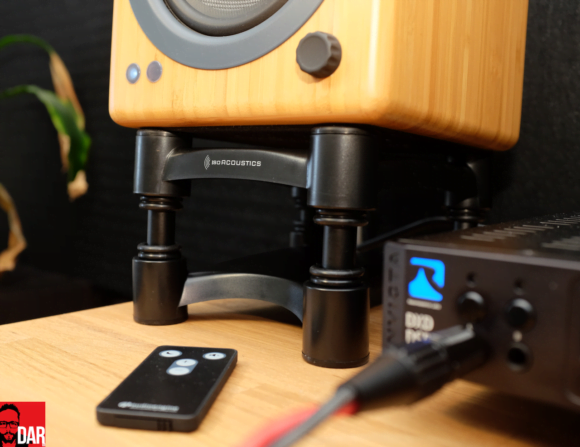