Not all audiophiles subsist on a diet of nicely recorded, thoughtfully mastered material. I’d wager most don’t. Most likely that most audiophiles choose music irrespective of the mastering engineer’s prowess with dynamic range compression. The Loudness War might be an ongoing pain in the proverbial but to allow one’s playback hardware to dictate the material that gets fired through it – that’s the sound of the tail the wagging the dog.

For the modern music fan, s/he who has a tendency toward alt. rock, indie, electronica, avant garde et al, the ‘music first’ mandate can sometimes be a real challenge, especially when upgrades slowly expose the inadequacies of the source material.

Exhibit A: Oasis’ Definitely Maybe is one of the better known crimes perpetrated against dynamic range in 1990s. Listen to the whole thing in one sitting can feel like a marathon run for the ear. Frankly, it’s exhausting, especially when the playback chain starts with something as seemingly transparent as the Chord Hugo.

Exhibit B: The Future of the Left (nee McLusky) make smart-ass proto-punk for the modern era. They’re one of this writer’s favourite bands OF ALL TIME and yet in the hands of the AURALiC Vega, aurally it’s like going toe-to-toe with Mike Tyson. Punch drunk is how I feel after “Lapsed Catholics” has wrapped Travels With Myself And Another.

Little wonder then that so many listeners have taken to PS Audio’s DirectStream; a DAC whose transient-massage is perhaps well suited to those making the transition to digital from vinyl. The downside? At US$5999, it’s a luxury that doesn’t come cheap.

However, as evidenced by the Darko DAC Index, a better textured, more dramatic sound awaits those prepared to forego the DirectStream’s touchscreen, remote control and digital-preamplification. With international exchange rates moving in the USA’s favour of late, ~US$6000 now gets you this reviewer’s favourite DAC to date: Aqua Hifi’s La Scala MKII. 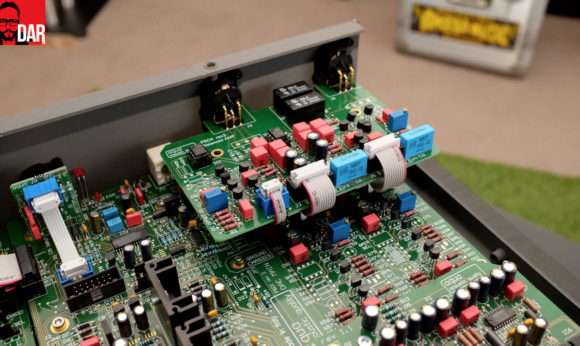 From this Burr Brown chip we get PCM compatibility up to 24bit/192kHz but the La Voce S2’s modular design accommodates digital board swapping for when owners want to try a different flavour. Options for the (also R-2R) Analog Devices AD1865 and Philips TDA1541A are for those untroubled by a CD/Redbook ceiling on sample- and bit-rate compatibility.

Pop the lid on the La Voce S2 and you can’t miss the twin toroidal transformers that ensure independent power supply to the analogue and digital sections. Conspicuous via their absence are op-amps. As per bigger bro, I/V conversion and output staging in the La Voce S2 remain resolutely discrete (but no tubes or optocouplers).

The signal still comes right off the conversion chip though. In Aqua Hifi speak, that’s ‘Direct From Decoder’ (DFD). For everyone else its translates to an absence of digital filter / oversampling. This, ladies and gentlemen, is a NOS DAC.

Aqua R&D uomo Cristian Anelli fills in the blanks: “One of the main factors in La Scala and La Voce’s different sonic approach is the elimination of digital filtering. Since 2005 we started to research a different solution from the upsampling / oversampling ones – the absolute standard in that [noughties] digital era.”

“We realised that the ‘heart of the sound’ would be found not only in eliminating the digital filtering but also in the quality of PCM signal transmission (I2S, etc).”

Digital inputs out back number four: AES/EBU, BNC, i2S and XMOS USB. Notable by its absence (on my review unit) was the consumer standard toslink. Apple TVers and gamers should fret not – it can be optioned, along with coaxial S/PDIF, at order time. 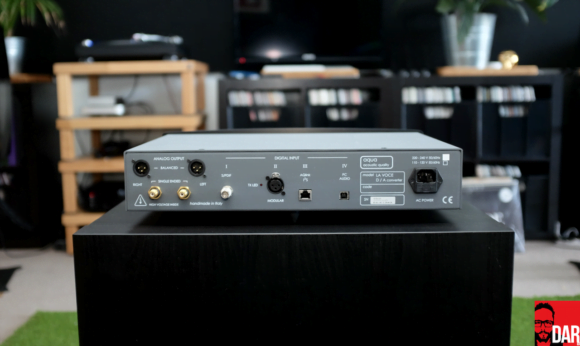 “The so called ‘jitter problem’ is important to the final sound quality, but not the only issue that affects the digital playback,” continues Anelli. “That is the reason why we developed a whole new circuit that would later be identified as DFD (Direct from Decoder). DFD circuitry is purely made out of logic gates and La Scala MKII DAC’s DFD circuitry is more sophisticated than the La Voce’s.”

Aqua recommended 200-300 hours burn-in. A Curious USB cable was hooked into the behind of my review unit. At the other end, a Mac Mini running both Roon and Audirvana+. Downstream, Vinnie Rossi’s LIO played the role of pre- and headphone-amplifier into Adam Tensor Delta loudspeakers and HiFiMAN HE-1000 ‘phones.

Looking back, I could’ve written this review after the first album played through the La Voce S2: The House Of Love’s razor-thin-sounding debut from 1989. It sounded less offensive than I’d remembered. So too did that which followed: The Fatima Mansion’s Valhalla Avenue, an album whose final third is so caustic-sounding that a wince is never far away. The legacy of 1980s production values (or is it in-studio A/D converters?) loom large. Again, via the La Voce S2, it sounded far from terrible. And a little bit terrible is the way I remembered its sound. WTF.

No single tune in this Roon-generated playlist grated as much I thought it might. Or that it once did. Or some combination of the two. Some even sounded pleasant. WTF x 2.

I clocked up the hours over the course of two weeks, occasionally clicking the LIO’s input over from a Chord Hugo TT fed by an Aurender N100H for a quick progress report. With 200 hours on its odometer, I returned to the La Voce S2 for further assessment. 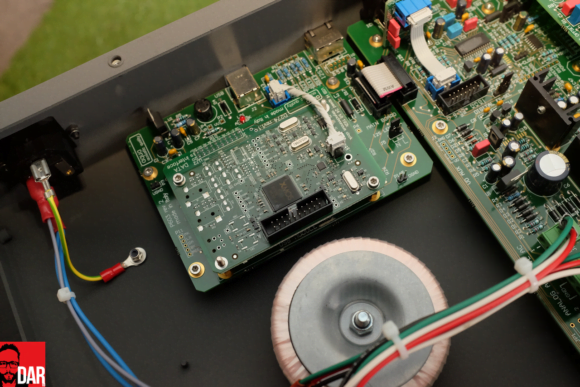 Despite seeing ones and zeroes from the inferior transport, listening to the La Voce S2 brought on a little rear-view reflection: not since owning a Marantz CD63 MKII back in the mid-90s do I recall such continuous easeful listening with ALL source material (and not just the nicer sounding stuff). A kindness-to-all delivery is the most noticeable way in which this Aqua DAC sets itself apart from the competition; a difference that’s more pronounced than that of Vega vs. INVICTA.

And yet the Aqua unit proved to be as almost adept as its rivals with detail excavation – yes, even the sub-US$3K-category-leading Chord Hugo – but it didn’t lean as heavily on the Chord’s high pixel-count M.O., which proved a real boon for indie rock n roll’s diminished spit n polish. When relayed via DACs that prioritise down-to-the-bone exposure – Mytek Stereo192-DSD, AURALiC Vega, Resonessence Labs INVICTA – even minutiae get a full undressing. There is no choice but to wake up and smell the coffee.

Fans of Steve Albini-produced albums will know this all too well. One of my top picks from his enormous body of production work is The Auteurs’ After Murder Park. Next to the Italian contender, the afore-listed delta-sigma units play it thinner/reedier, making it more difficult to listen past the drier, leaner sound of Albini’s signature sound that’s so pivotal to this album’s live sense of unease.

Player separation is fine if it doesn’t threaten the listener’s sense of the whole. In this respect, the La Voce S2 trumps its rivals, better delivering The Auteurs as a complete band. The Hugo TT’s take separates players via a slight thinning of acoustic mass and a further teasing out of atomic-level detail. In this respect, the TT more readily exposes the band’s four constituent members but in turn demands the listener’s ear/brain play a subconscious game of reassembly. In other words, the La Voce S2 is for those who want to eat cake without being explicitly reminded of flour, butter and sugar. 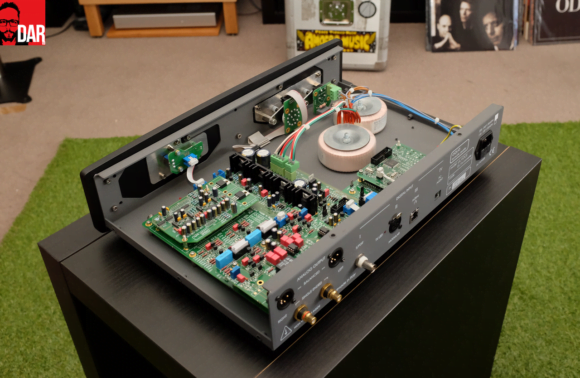 Spying the scene from a different angle, the La Voce S2 contrasts its rivals as sounding more scientific. They play Heston Blumenthal to the Italian’s Jamie Oliver.

Could it be then that the Mytek, INVICTA, Vega and Hugo/TT satisfy detail FOMO (fear of missing out) more than they properly nourish the listener? Of course not – but some will undoubtedly hear it that way.

If you find Sabre-rattlers all much of a muchness, the Aqua unit could well be a better fit for your tastes, especially if your music tastes closely align with that of your average Pitchfork or Uncut reader: The Hold Steady, Autechre, David Bowie. With the latter’s catalogue yet to see a remastering job that didn’t leave it sounding nervy and overly etched in the treble, this old-school R-2R-equipped unit is just the ticket for savouring the ‘Berlin trilogy’ in a single sitting.

And no – not all PCM1704-loaded DACs sound alike. Sporting a quartet of the very same Burr Browns, a Reference 5.32 from wallet-friendly goto Audio-gd just couldn’t keep up with the Aqua’s ability to draw players in the depth dimension. I thought it sounded good in its own right but somewhat flat and lifeless when A/B-d against the La Voce S2.

If vinyl lovers find themselves drawn to PS Audio’s DirectStream because of DSD’s seemingly kinder handling of transients, those same boys from the black stuff might find comparative levels of aural satisfaction with the Italian – and for le$$. The pleasure derived here is of a slightly different nature: the Aqua sounds cooler and more considered. On rhythmic poise and composure during complex passages I’d call it a dead heat. 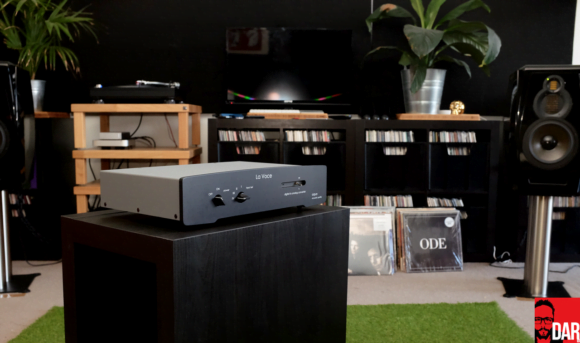 That said, this Milanese-manufactured unit isn’t for those who demand a kitchen sink feature set. The absence of bells and whistles no doubt helps keeps pricing sane but Aqua’s approach is one of sharp focus on a shallower depth of field. If you need headphone output and/or portability, the Chord Hugo remains the go to device at the La Voce S2’s price point. If you’ve only need for the DAC portion then the Italian is one deadly serious contender.

One word to nail this Aqua’s essence? Rectitude. The La Voce S2 keeps treble incision on a short leash, there’s just the right amount of upper-mid crisp-crunch and an elegant sufficiency of low end import. A DAC for those who want that Goldilocks moment each and every time they hit play. A DAC for those who can’t handle the truth? Perhaps. But try listening to the brickwalled grinding dirge of Future Of The Left’s catalogue at full tilt on your existing DAC as see how far you get. In the La Voce S2’s hands, it’s hours and not minutes. Brutal honesty is rarely the best policy.

It’ll suit anyone with a music collection that spans a vast array of contemporary fare for which production values and dynamic range compression could most charitably be described as mixed. Ironic that such profound gratification from modern day music should come from a DAC design avenue that points to the past.