“Bits are bits”. It’s the number one mantra turned meme to infect mainstream thinking on digital audio. Number 2? “It’s just ones and zeroes, mate”. The corollary: if all binary data gets from point A to point B – and error checking mechanisms ensure it does – then data transmission is all that matters. Case closed.

Not so fast, bucko.

If points A and B are computers seeing a file being relocated from one to the other, the ‘bits are bits’ logic holds fast. So too when sending a print job out over USB. It comes unstuck when digital audio devices like D/A converters play receiver (point B) where the arrival timing of each bit matters; bit-to-bit mis…timings are referred to as jitter. Jitter causes D/A converters to perform sub-optimally, lending the resulting sound an emotionally distant quality. Look into its eyes: lights on, nobody home.

Also influencing a DAC’s audible performance, perhaps to a degree greater than jitter, is the electrical noise (EMI/RFI) ingested by said DAC when umbilically connected to its source, often a consumer grade PC, to DAC. The latter’s internal oscillators, implemented to re-clock the incoming data stream, are extremely sensitive to electrical noise, which can easily disturb their timing accuracy.

None too dissimilar to the mechanics of the same-sex marriage debate, there are detractors: those who not only wish to hold tight to the comfort of their world view that bits are bits and that’s all that matters, but would also wish metaphorical fire and damnation on anyone who sees things differently.

For the sake of argument, let’s assume that electrical noise cross-contamination isn’t a factor in the quality of digital audio, that bits are bits and that’s all that matters.

The implications of returning to this standpoint are not insignificant: 1) manufacturers of deluxe digital cables and noise filters are perpetrators of a scam large enough to make county fair-bought potions, that promise to cure arthritis and the common cold, look like they have a sound basis in science ; 2) that review sites and their staff are at best prone to the powers of suggestion or, worse, flat out liars; 3) that anyone buying such products have been totally hoodwinked.

An exceedingly long bow needs drawing in order to assimilate the ‘bits are bits’ position. 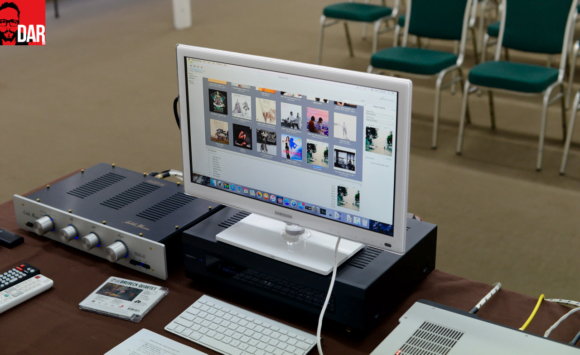 Compounding the issue is the pack mentality endemic to internet-based discussions. A mentality that kicks really kicks into being when said pack is confronted with something new that requires potential reassessment of current thinking.

It usually unfolds thusly: A thread is started with a link to a deluxe cable or doohickey seeking opinions on the same. The first responder bowls in with a “that looks suss to me”-type comment. The ensuing pile-on is as ugly as it is predictable. The product is either rubbished in theory or the (perceived) absence of proof from the manufacturer pointed to as proof of its snake-oil status. “Well, this ‘ere world globe suggests the world is not flat after all…but it’s nothing more than a toy – BURN HIM!”

Our mob’s next step is to ensure ongoing physical distance between it and the product that “couldn’t possibly make a difference”. Actual listening would bring it too close for comfort. As such, solicitations to try it for oneself are shot down. “Listening? Pah! That’s all part and parcel of the scam!” comes the snorted retort.

Such is the combined power of mutual cynicism that it is invariably self-reinforcing. New products that don’t align with our cynics’ a) existing world view or b) wallet depth must be squashed underfoot lest sales figures gain momentum and another industry scam is perpetrated.

Let and live though, right? Sadly not. There are even digital audio extremists who would seek to correct anyone not sharing their particular point of view. Michael Lavorgna discusses this over at the always on-the-money AudioStream here.

In 2015, the number one target for this kind of bully-boy treatment is the audiophile-grade Ethernet cable and to a lesser extent USB filters. Four or five years ago it was the humble USB cable and audiophile playback software applications, both of which are now more widely accepted as altering the sound of one’s digital playback, hopefully for the better.

However, some skepticism still lingers. 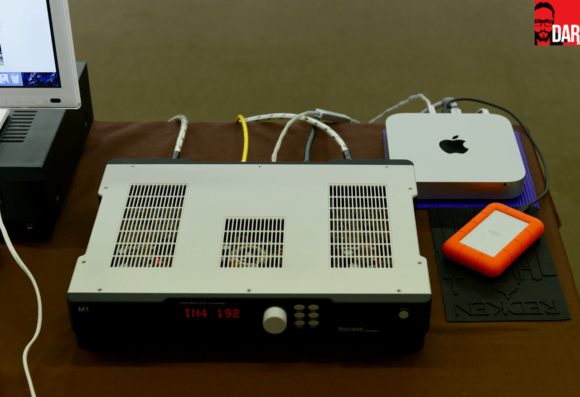 Proving that it counts open-minded skeptics amongst its members is Sydney Audio Club who last weekend undertook a whole lotta blind testing in the digital audio realm. Advance notice being Sydney specific, a post went up on DAR Australia last week. The results however are not bound by such geographical limitations.

“When we announced the meeting format, there were people writing and calling to say we were wasting our time – the contention was that all music players sound the same. So why were we wasting our time?”, says SAC President Tom Waters.

The skepticism didn’t end there. On the day itself, Waters’ opening remarks about there existing an audible difference (to his ears/mind) between software players brought smiles, puzzled looks and some throat clearing to the audience.

Time to find out.

(Before that a disclaimer of sorts. SAC isn’t a science lab. This event saw a bunch of chaps listening to different software players and voting on their preferences. Nothing more, nothing less. What follows should be dutifully ignored by readers insisting on the strictest of listening conditions. Moreover, ‘preferred’ does not immediately imply ‘best’.)

With a mere 75 minutes at their disposal, forty or so Aussie audiophiles had convened in Epping to compare PureMusic, Audirvana+ and JRiver on a Mac. Keeping the field down to three popular favourites, even at the expense of Amarra, keeps focus tight. No need to include every option coming to market if the main focus is to prove/disprove a difference.

All listening was conducted ‘blind’. No one other than Waters knew which application was being used for playback at again given time. The audience could only see the rear of the Mac’s display monitor.

Asked simply if the audience heard a difference between options 1, 2 and 3, the audience responded resolutely in the affirmative. On matters of preference, a vote was cast by each member.

[Side note: Waters himself abstained from voting – as he should – but he also believes JRiver on the Mac to be inferior to the Windows version]

To alleviate any remaining doubt, Waters then suggested another round, this time with each player’s identity announced ahead of playback. Being served up this time ‘round, Mozart’s Requiem (24bit/192kHz FLAC), a comparatively short piece of full-on choral and orchestra. A casual vote saw preferences split between PureMusic and Audirvana+ with JRiver bringing up the rear again. Poor JRiver. 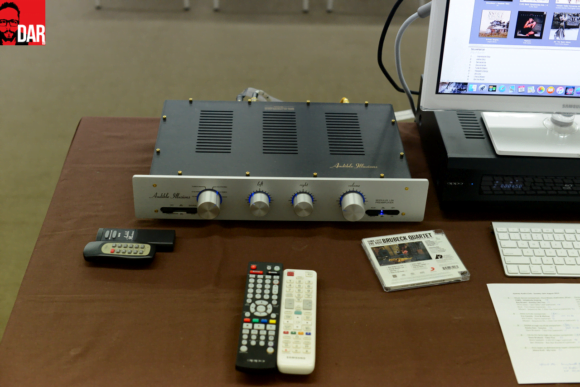 Next up onto the blind A/B testing block, a comparison that I too have conducted at home: Steely Dan’s Gaucho in DSD vs. its 24bit/96kHz PCM equivalent. As Waters points out, provenance details for these downloads is in short supply. One can only assume they are derived from the same master.

In my own listening tests with a Resonessence Labs Herus DAC, I heard the PCM version as having more bite on the air whilst DSD comes on softer, more relaxed. I preferred not one over t’other.

How would SAC preferences tumble down?

In voting, the DSD64 version notched up 18 votes compared to the high-res PCM version’s 17. These results underscore how an individual’s preference for hi-res PCM or DSD falls to a matter of taste rather than there being a out-and-out ‘best’.

One more comparison before the curtain falls: Dave Brubeck’s Take Five is as well worn in audiophile circles as Jazz At The Pawnshop or Diana Krall. One advantage of such ubiquity is an ability to lay side-by-side a CD (from Austria’s Analogue Productions), a lossless rip of the same CD and a 24bit/192kHz PCM download of the same master. The latter two could be compared blind but the dropping a silver disc could not be properly concealed from the audience.

Some fairly conclusive results eventuated: a single vote for the CD, 9 for the ripped CD and 13 for the hi-res download. That’s interesting. I would’ve expected the OPPO disc spinner to best the MacMini on Redbook playback alone. With the bits being read from the CD being the same bits as those ripped to the MacMini’s hard-drive, clearly there’s more going on than just binary transfer from transport to Bricasti DAC.

The differences are most likely attributable to differences in electrical noise (as well as jitter). Noise inside a CD player’s less complex and audio-centric internals is generally thought to be less than that emanating from a consumer-grade computer like Apple’s MacMini.

Noise is also pivotal to each software player’s SQ: 1) Caching audio into RAM before playback reduces the number of hard-drive reads during playback and so reduces electrical noise. 2) Sleeker software code can limit the need for the player to call on CPU clock cycles and again reduce associated electrical noise. iTunes and Windows Media Player are not designed this way. Neither nor Apple nor Microsoft streamline their code for optimal sound quality through noise minimisation.

And who am I to judge if that matters not a jot to you? 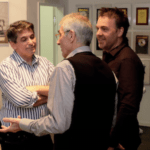 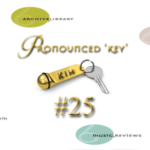