Cowabunga. Don’t you just luv it when walking your talk struts it to perfection? This recently happened to the unholy trinity of me, myself and I. There I was minding my own business when an already forgotten review solicit from the year prior reignited my inbox to announce that they were ready. Was I? Who were they again?

Ah, yes – a new Swiss manufacturer called Eversound. Living in Switzerland, I view such domestic opportunities as special. What other reviewer lives here? But I said yes not just for that. Let’s face it, sainthood isn’t on the ticket. Had it been audiophile fuses, cables or ornery costly tweaks, I’d likely have declined. But this was about a no-compromise computer speaker.

Which gets us back at powered/active boxes and the various nice things I’ve said about their concept and its many advantages in prior KIH instalments. Here was my chance to turn theory into practice. Particularly on the desktop, self-powered is so very sensible. Who wants an altar to hifi separates there? What’s more, dual-concentric is the way to go. One sits too close for vertical arrays to fully cohere and act as one.

But what about headfi you ask? Quite. My worry precisely. On my work desk, I toggle between headphones and speakers a lot. If I consolidated my separates into active speakers, I’d so not want an extra can-opener box. Voilà, this Essence speaker sports a 3.5mm switched headphone port so you can leave those ‘phones plugged in (a good thing too since that headfi port is on the back). But what about a sub? Surely a tiny 4.5” coax driver could stand some assist down low? Taken care of with another 3.5mm stereo output. 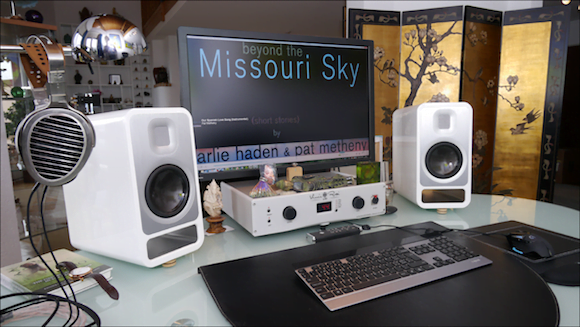 How ‘bout USB? Enter Uncle Gordon aka Gordon Rankin of Wavelength Audio and AudioQuest Dragonfly. He was custom-commissioned to design the DAC/gain board for a 24/96 async DAC and 12dB active line stage with a pair of RCA analog inputs (there’s also a 3.5mm stereo for portable sources). How about volume? That’s a top-mounted analog pot coupled to a big dimpled disc on a Teflon washer. How about finish options? 10 stock combinations.

In short, the father/son team from Poland behind the brand and product have really thought of everything a cantankerous ol’ career ‘phile could want. Even the master/slave speaker cable is terminated with 3-pin XLR to hit proper pretentiousness cred. When the Kwoleks offered personal delivery to show me a disassembled unit in all its parts, I couldn’t resist. My formal review on 6moons tells that explicit tale in all its glory.

The reason I revisit the subject here is that it made me think. And you have no idea just how rare that is. About hifi I mean. Let’s face it, much of it is an endless stream of sameness particularly from a chair like mine. Been there, done that and burnt away all excitement sounds more depressing than I feel about it but some of it does factor. 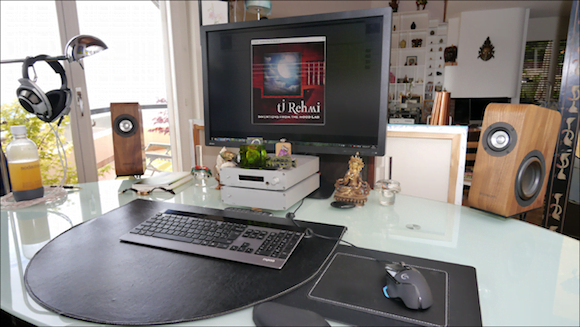 The thing that got me thinking once I had the Essence up and running was a forum mention over a 16kg heavy power cord with a photo of it shown off like a fisherman’s giant eel catch. In the context of truly enjoying a €2’700 complete miniature system—even more so than the €6’500 set it replaced—the entire concept of a power cord heavier and costlier than it felt obscene. Never mind that, it felt outdated. It felt like a passé belief that such things are even necessary to enjoy the music. Perhaps they once were but today?

Mind, if you can afford exotic separates with all their trappings and enjoy their ownership, I’d never dream of interfering. I like expensive Western boots where some €60 loafers would do. And that’s the point. I know full well that my various Lucchese, Sendra, Cuadra and Old Gringo boots from Mexico and Spain are completely unnecessary regardless of how well made and comfortable they are. When it comes to hifi and the many reader inquiries I get, I believe that many far overshoot in what they believe is necessary for their application and scenario. They pursue a turbo-injected V8 all-wheel drive when a smart 4-cylinder ride would serve them better, never mind save cashish on the initial buy, then subsequently on fuel. 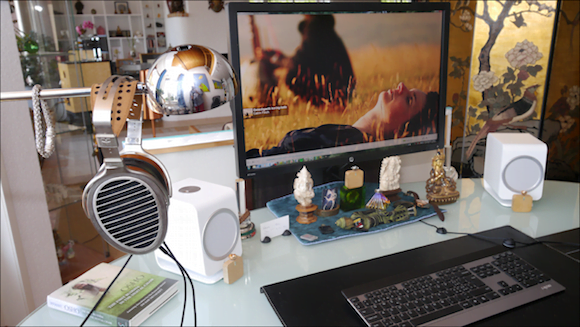 In short, it’s one thing to pursue complex exotic hifi for pride of ownership. It’s another if you think it mandatory to enjoy music at a high level. One is want, one is must. Big difference! Having acquired the Essence as my desktop system, I’m here to say that for this application, it’s balls-out homecoming. It’s been custom-calibrated for this very purpose by very cunning design. Even without a subwoofer, lower bandwidth is a shocking ~40Hz. The only thing you might want (I did) is some form of stand to raise the small metal cabs by about 16cm. The off-axis response of their coax is very good. Hence there’s no tonal balance issue of having those drivers sit low and aim straight out. But if you have a large 30” computer monitor set up high; and if you like the illusion of having the musical scenery occupy the same total space as said monitor… then the Essence as is stages too low and occupies only the lower half of your screen.

That’s the only minor proviso. Otherwise this solution desktops it better than anything I’ve tried before in now 13 years behind the wheel. At €2’700/pr, it’s certainly far from cheap. That’s because it is a very serious attempt at being the world’s best computer speaker. Would a $1’494 Wyred4Sound mINT plus $1’500 pair of KEF LS50 go further? I seriously doubt it. It might get close but still entail one more box. And get this. I got mine set up with the €2’900 HifiMan HE1000 headphones which, by themselves, outspend this entire system. But that’s how good it is. It warrants the very best cans in my inventory. Really! 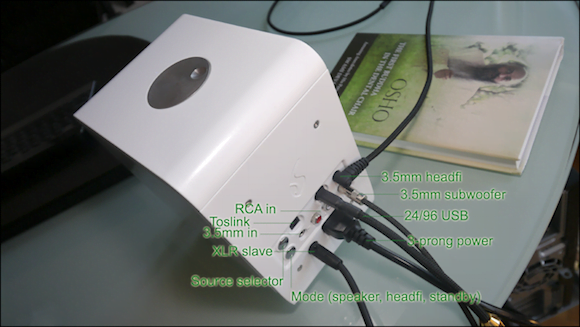 Knowing what’s required to arrive is the hardest thing in all of hifi. What is too little, too much or just right? The regular music lover makes a nice fat target for all sorts of propaganda which exploit ignorance, good intentions, very real desire and hard-earned bread. Even the most honest and experienced reviewer is liable to have drifted upward over the years, into fiscal realms that are now well beyond what’s actually required. On this gig it’s normal to eventually get into extremist stuff.

Meanwhile who trusts the rookie reviewer who talks up cheaper stuff? It’s human nature to assume lack of experience which is simply ignorant of the larger picture, hence doesn’t know what’s really possible. Based on that simple logic, the most senior reviewers with the poshest of systems become the ultimate bellwethers. In truth, many of them are sadly out of touch with the most current far more economical solutions. Those now fall well below the realm of where they play; and where it’s relevant based on their ancillaries. Let’s face it, teaming $1’200/pr speakers with $50’000 turntables and $5’000/metre cables is silly. 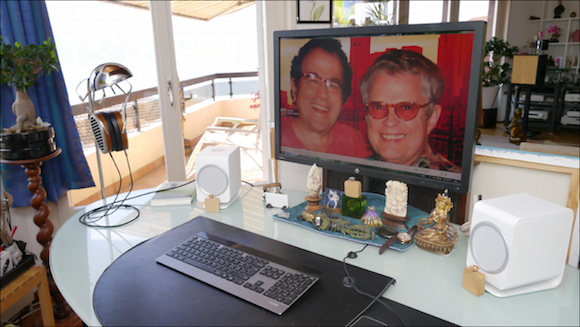 To be sure, I’m just as guilty of this as my colleagues. It’s part of the job and, mostly, unavoidable. The only attempt to counteract it is to deliberately go after stuff across a broad stretch of price points; and to maintain an inventory of more budget highlights to keep one honest. The KIH lesson for today? Like headfi, the desktop is an ideal environment to practice realsization. The reasons are obvious. You sit real close. That eliminates most of the room from the equation. You needn’t play as loud to have lift-off. That and short distances imply that lesser weaponry (lower power, fewer smaller drivers) suffice. The nearfield and smaller drivers also mean no typical room boom and bass issues. Less expense, less problems!

As a consequence, less very literally becomes more. You don’t want big boxes. Ideally you don’t even want a conventional two-way but a coax. You don’t want big expensive power. It’d just sit there never used. What you do want is a fully integrated maximally compact solution. That’s what this Swiss Essence is. Nobody in their right mind would propose it for a 60m² room to replace conventional systems. That’s a story for another day. But for the nearfield—which needn’t be a desktop!—it’s perfect and truly uncompromised, no redundant A/D conversion or lossy digital attenuation involved. Which isn’t to say that one couldn’t spend less and be perfectly happy. Let’s face it, this product is extremist in its own right. Yes, grasshopper, it’s ultra bonsai audio. To find out how close one might come with a KEF X300a, our own John Darko may have to chime in though I expect that it should entail the loss of the very good headphone amp. 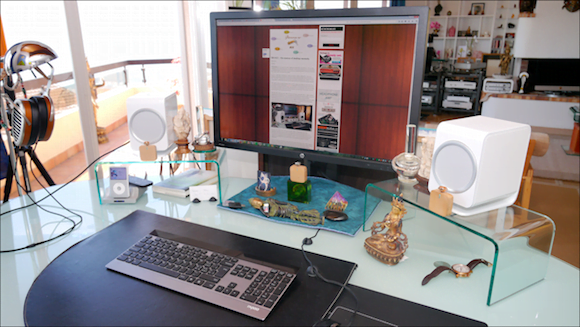 Incapable of escaping my own shadow—my set of reference points, expectations and audiophile career—I will simply leave you with this: if you thought that more than the Eversound Essence was required to partake of playback at the very highest desktop level, stop and lower your sights. If you’re still hoping that less could get to the same place, I presently can’t help (though I’ll be in a good position to judge future low-balling contenders and speak up when one topples the Swiss). Enough for today.