Outlandishness. It started with Neil Young who in February dismissed vinyl’s renaissance as a fashion statement, A similar sentiment was this week echoed by Peter, Paul and Mary’s Noel Paul Stookey – he called vinyl’s fresh lease of life ‘a fad’. Also this week, Forbes quoted Quincy Jones: “Honey, we have no music industry. There’s 90% piracy everywhere in the world”.

Old timers looking for relevance in a changing world? Cynical attempts to steal headlines for a promotional subtext? Perhaps.

At the end of June, Nielsen published their report on music sales conducted in the U.S.A. for the first six months of 2015. (Commonly referred to as ‘H1 2015’).

For those unfamiliar with The Nielsen Company, Wikipedia tell us that they are in the business of “global information and measurement”. Clicking over to Nielsen’s website proper expands on this. Nielsen “provide insights and data on what people watch and what people buy”.

Time to poke around inside the report.

The first major headline is that vinyl sales are WAY UP, bucking the trend for albums sales as a whole which are down 4% on H1 2014.

Vinyl’s recently exhumed popularity saw year-on-year sales grow from 4m units in H1 2014 to 5.6m unit in H1 2015. That’s a 38.4% jump. The most popular albums came courtesy of new releases from Taylor Swift and The Alabama Shakes, a slightly older one from The Arctic Monkey and (the much older) Kind Of Blue by Miles Davis.

An interesting aside: Taylor Swift doesn’t rate in the UK’s top selling vinyl albums so far for 2015. Noel Gallagher, Led Zeppelin and The Stone Roses take out the top three spots with the first female artist – Amy Winehouse – taking out the Number 18 spot. So British!

Back to Nielsen’s US-only remit. Fans of the black stuff will be delighted to hear that their preferred format now comprises 9% of all physical music media shifted in the USA. However, once digital downloads are factored back in that figures slips to 5%. Last year that figure was a mere 3%.

Charting vinyl sales trends back to 1993 we see the bullishness of recent years.

However, in the context of vinyl’s 1970s and 1980s hey day, the recent upward trend appears comparatively minor. Fashion statement? Blip? Fad? Calling it out in those terms just isn’t possible. Sorry Neil Young, sorry Noel Paul Stookey. Whatever the long-term prognosis the world’s record pressing plants are currently running at capacity. The upward movement of demand and supply looks set to continue for the foreseeable future.

These stats talk to the very point I used to diffuse tension between Chris Connaker and Michael Fremer’s at T.H.E Newport Show last month: the resurgence of vinyl is BIG when viewed against the backdrop of vinyl sales figures throughout the noughties, but small in the context of other (digital) formats.

Looking at this chart from the Wall Street Journal, music sales are on a downward trajectory. One that’s being softened by the market’s partial transition to digital downloads and the aforementioned sharp uptick in vinyl buying.

Be careful no to infer from the above chart that the US music industry’s ability to make money is on the slide. According to the Recording Industry Association of America (RIAA), wholesale level sales of US$4.86bn in 2014 were up 2% on the previous year whilst retail revenue at US$6.97bn was down 0.5% on 2013.

Streaming service revenue is picking up the slack left by dwindling physical media sales. To wit, this is how the US music industry’s revenue separated in 2013: 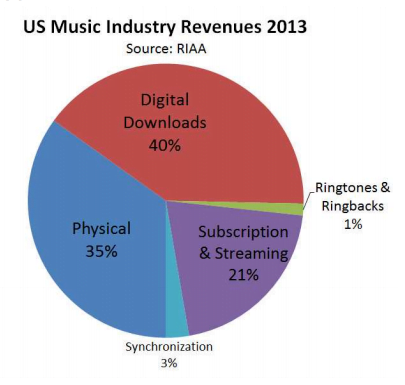 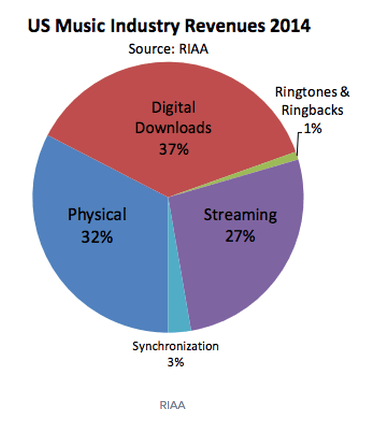 Let’s look more closely at streaming services. Back to the recent Nielsen report:

But American is not the world. Outside of the USA – and particularly in Scandinavia and South Korea – streaming is far more popular, demand for which outstrips digital downloads by up to 87%.

Looking at the USA, Canada, Germany and Australia where streaming demand currently lags behind, I think we can safely expect their download-to-streaming ratio to eventually swing in favour of streaming. Streaming services are the mainstream future of music delivery.

Don’t believe me? According to reports in The Australian and The Wall Street Journal, the latest figures from the IFPI show 2014 as the first year in which global digital download / streaming revenue outpaced money coming in from physical format sales: $6.9bn from digital, $6.8bn from vinyl and CDs.

This isn’t a re-ignition of the digital vs. vinyl debate. Far from it. People are free to choose whichever format they prefer. One person’s preference has no effect on his neighbour.

Consider the possibility that the man in the street’s move to streaming services might ultimately cause CD supply to slow. Just as we saw with the decline of vinyl supply in the nineties, it won’t be long before an artist (or its label) questions the economic viability of a CD release. Will those physical format doubters continue to fulfil the audiophile’s need for a FLAC or ALAC by supplying download sites that offer the same? We already know that lossless download sites like Boomkat, Bleep and Qobuz are no way near as comprehensively stocked as a CD store. CDs are sometimes the only way of getting a lossless version of an album onto a music server.

Tidal Hifi and similar services from Qobuz and Deezer are all very well but the music isn’t your to keep – you only rent it – and many of the bigger artists have been know to turn off the supply tap at a moment’s notice: Thom Yorke, Taylor Swift and Prince being notable examples.

Conspiracy theorists might also point to the contract between label and artist most likely to financially favouring the former with streaming; is this not the real reason why so many artists complain of streaming’s malnourished remuneration? Couple that to Warner, Sony and Universal each having a financial interest in Spotify and we see greater major label incentive to prioritise streaming over CDs.

We started with outlandish claims and so I’ll end with one of my own: CDs are on their way out and alongside their slow demise will arrive a corresponding shortage in lossless audio supply.