“All you have to do is write one true sentence. Write the truest sentence that you know.” – Ernest Hemingway

My name is John and I am 43 years old. I’m 6’5” tall but I’m overweight. I’m a long way from approaching what might pass for obese but I’m carrying too much cargo.

My name is John and I’m a hi-fi journalist. Living in Australia, that means two or three long haul trips per year to cover trade shows. Show coverage is the number one of driver of site traffic and if I wanted to go hard on Google Stat maximisation I’d contract the room-to-room out to writers on the ground in each show location whilst I stayed put in Sydney and continued to pen reviews.

Alas, a writing team approach would massively dilute the core essence of DAR: a singular perspective. I therefore choose to handle global show coverage myself, often to the amazement of exhibitors who frequently exclaim on the number of air miles I must be racking up. Yes, I travel a lot – almost as much as Xuanqian Wang from AURALiC and the guys from Astell&Kern. And yes, travel is fun.

The downside of so much time spent away from home is its impact on my weight. I eat out more and I spend large slabs of time sat stationary on planes and in transit lounges. It’s tough to rack up 10,000 steps per day on show floors alone.

An absence of routine on the road mens the Sydney-side exercise and diet regimes slips away quickly. I take advantage of hotel fitness centres whenever possible. In Munich, I walked to and from my Schwabing-located hotel to the M.O.C. each day – about 3kms. Since then I’ve been in New York visiting friends and walking the city as much as possible, sometimes clocking as much as 15kms of footwork per day. 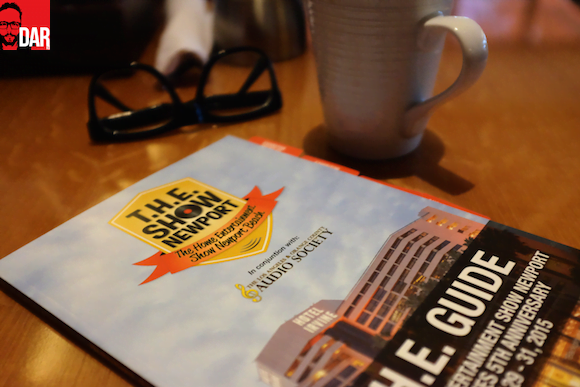 Two weeks later and I’m in Irvine, CA. T.H.E. Show Newport Beach has a new location this year: the all-in-one Hotel Irvine. The bar name says red but all I see is tangerine; the retina-scorching aesthetic of these surroundings sits somewhere between a 1970s airport lounge and the work of an interior designer too lazy to think beyond the mandate of ‘funky’. It looks as bad as I feel right now.

In the eye of this show storm I’m not thinking about hi-fi, I’m thinking about health…or rather the lack of it. I’ve been away from home for almost 3 weeks and I don’t recall a time when I felt so downright rough. I have a cough that won’t quit and a waistline that’s moving in the wrong direction.

A healthy body begets a healthy mind. With physical state all wrong, my head is a long way from the clear thought required to do justice to the notes and photographs I’ve been laying down weekend. For Newport show coverage proper, dear reader, you’re going to have to wait. I’ll be back down under in a day or two, back into a healthy diet and regular gym visits. From there I’ll spend a week or so disseminating what I’ve seen and heard at T.H.E. Newport Beach Show. Hang tight.

In the latest episode of the Darko.Audio #podcast

And now for something completely different.