It’s an all too common scenario: you’re an audiophile but the majority of your friends are not. They think Bose is the bee’s knees whilst simultaneously seeming content with TV speakers or monophonic Bluetooth solutions. They run little white earbuds to and from work.

Bang the drum for good sound often enough though and the inquiry will eventually arrive: “Alright, so what should I buy?” Well played, you’ve jimmied open the door marked ‘curiosity’. Time to capitalise. But tread carefully – here be monsters.

Against the contextual backdrop of music now being effectively worthless, we must vault the non-audiophile’s perception that playback hardware needs to arrive in a similarly cheap-as-chips package: for a smartphone or TV, spending a grand is fair game but for audio gear, it’s a small fortune and/or outrage.

And then there’s box count. It’s but a trivial matter to demonstrate how physically separated loudspeakers utterly trounce the deceptive simplicity of uni-boxes like the Naim Muso and Devialet Phantom on dynamics, detail retrieval and especially soundstage size. The Devialet and Naim are sonically optimised within a pre-established form factor whose primary appeal is one of aesthetics. A more traditional hifi system – particularly at the entry-level – doesn’t arrive with quite such attractiveness but nor does it arrive so loaded to stereophonic compromise. 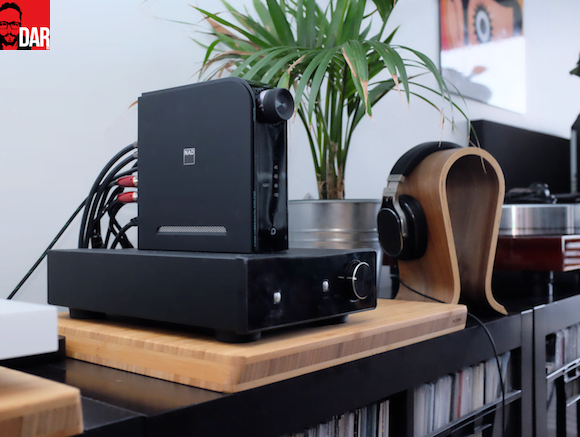 Running against the grain of modern life: to achieve better sound at home we must surrender a little convenience. Our non-audiophile must be convinced of the audible value of separates – hello stereo sound!

Powered loudspeakers that house their own amplification fed by a USB dongle DAC might the most logical starting point beneath US$1K: A pair of Audioengine A5+ (US$399) with an AudioQuest Dragonfly v1.2 DAC (US$149) will set you back a total of US$550 – an outlay than runs close to the Class A/B bi-amped KEF X300A (US$799) whose left and right cabinets both internalise DSP for proximity EQ switching and D/A conversion.

Need vinyl playback? Add an Audio Technica LP-60 with in-built phono pre-amplifier (US$99) to get up and running with the lowest outlay possible or drop more moulah on a Pro-Ject Debut Carbon (US$399) + Schiit Mani (US$129) to extract a little more something-something from your records’ grooves.

When putting together an entry-level system, the active speaker sector’s pencil-sharp value quotient holds sway over passive designs. Bringing the amplifier inside the speaker cabinet saves on amp casework cost, shortens signal paths (obviating speaker cable) and the designer can tailor the amplifier to match the transducer’s impedance profile. You often get more for less.

That said some people like to tinker. That or they prefer the pick n’ mix approach to system configuration through separates. 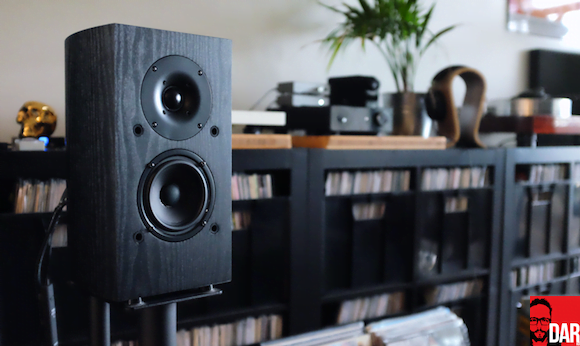 Modern entry-level integrateds often arrive with additional connectivity in tow: onboard DAC, phono stage and/or headphone output. What we need to compete with the world of actives is a decent passive loudspeaker that allows our budget breathing room for quality amplification.

Now our attention can (re)turn to the Pioneer SP-BS22-LR (reviewed here). Designed by TAD’s Andrew Jones, these standmounts keep would be highend-ers grounded. US$129 gets you past the checkout at Best Buy with a pair of bona fide audiophile-grade offerings. Keep one eye on Amazon.com for short-lived but significant price drops.

The Pioneers were pulled from storage, unboxed and placed onto Atacama stands. The entry-level amplifiers then placed atop Expedit shelving with AudioQuest Rocket 88 speaker cables. This wire costs as much as each amplifier and loudspeaker combined, a point made not to kick the Irvine cable company’s pricing but to provide context; our focus here leans towards chump change when contextualised within hifi’s high end.

The Rega Brio-R’s half-width chassis sits with a sleeker, lower profile next to the attention-standing NAD. The internal toroidal that powers the Rega’s 50 Class A/B wpc also piles the weight onto an already sturdy metal box. In one’s hands, the Brio-R feels like money well spent.

Not so the NAD – even at half the RRP, a need for upright positioning, matte/’rubberized’ side panels and plastic chassis do little to imbue tactile-led confidence. Compared to the Rega, the D 3020’s volume feels comparatively cheap too. A UcD/Hypex 30wpc Class D output stage means there’s no need for a heavy internal power supply here – at around 3kgs, the Canadian NAD is half the weight of its Brit rival. With a full complement of cables loaded into rear the D 3020 comes close to tipping backwards.

Functionality wise, the Rega is an altogether simpler, more traditional affair. The circuit board’s jocular annotation of “a nice drop of old school audio mojo” admits as much. Five line-level inputs, a very good MM phono input and a ‘Record out’. And that’s all she wrote. BYO DAC is mandatory for the Brio-R-centred system. I went with the AudioQuest Dragonfly v1.2 (US$149) so as not to puncture the US$1500 budget ceiling. 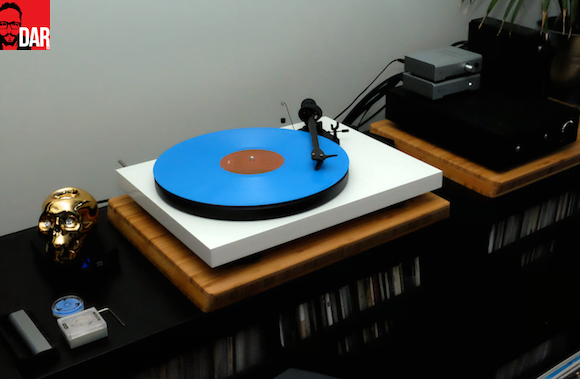 Whilst the NAD might not arrive turntable ready, one could easily connect an external phono-pre amplifier to one of its two analogue inputs, the twin RCA being the more obvious choice over the 3.5mm socket. The D 3020’s internal DAC is on par with most $100 solutions. You can feed it via USB, optical, coaxial or aptX Bluetooth but it is obviously outclassed once D/A conversion is deferred to a Resonessence Labs Concero HD. Even the AudioQuest USB dongle sounds better. External DACs bring greater musical presence and alertness.

And a little tenacity is precisely what the little Pioneers need to get up and at ya’. Despite being well extended in both directions they can sometimes sound a little reticent. That’s me nit-picking but it’s crucial when calling out the better amplifier match. Like their original DAC, the Rega’s thicker mid-bass lends it a richer tonality that at times proves to be too much of a good thing when driving the Andrew Jones-designed standmounts. Perhaps this Brit felt that the majority of amplifiers likely to be hooked up to his affordable boxes would present on with a more etched upper frequencies – he’d not be wrong – and in this sense the Rega is to be cherished for refusing the path to en-white-enment of the treble.

The Rega is the choice for those who like to listen through thicker air. If seductive female vocal or smokey jazz is your thing, I won’t argue. For a kick in the pants from raucous rock n’ roll or Ravey-Davey-dayglo-techno, it’s NAD all the way. The D 3020’s talents with polished window clarity are most obvious when immediately swapping over to it from the Brio-R. Even when a Pro-Ject Debut Carbon turntable – here equipped with the Australian-supplied but micro-dynamically challenged Ortofon OM10 cartridge – fronts a Schiit Mani phono pre, the little NAD has the nouse to lend the overall presentation more chutzpah than the Rega. In the context of our Pioneer speakers, that’s nothing but a good thing.

The fizz and more lively intoxication brought by a vodka, lime and soda – that’s the NAD. The Rega plays it woozier with a heavy-headed Shiraz. I dig uppers more than downers so the NAD exuberance gets the nod. It’s livelier sounding than the Rega but it isn’t what I’d call bright. Besides, bright is a word burdened with negative connotations? Let’s just say that its effervescence never plays it too intrusive or cool. 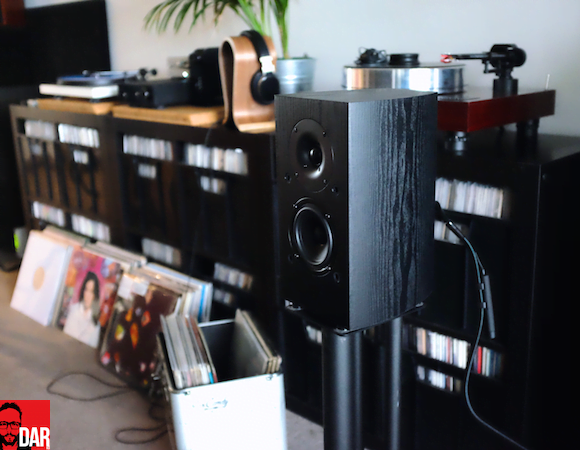 Moreover, the D 3020’s deeper illumination and player separation even steps up to bat at lower listening levels. From Brian Eno to Björk to Howe Gelb to Ben Salter, I hear further into the music, channel separation is more overt and textural information – sometimes nudged out of focus by the Rega – is conveyed with greater lucidity. These qualities sum to a more immersive entertainment experience.

Driving its budget sensitive advantage home, the NAD also comes with a more than capable headphone output that, like many other integrated amps built on a short R&D cost leash, has an inherent power limitation. Only portable-friendly cans need apply. Think of the NAD’s 3.5mm output socket as sonically on par with an Apple iPhone and you won’t go far wrong. I achieved good results with both the Master&Dynamic MH40 (US$399) and the OPPO PM-3 (US$349), each of which can be added to our system without breaking the US$1500 limit. The HiFiMAN HE-400S (US$299) could save us a further fifty sheets whilst bringing open-back headphone listening into the picture.

Let’s tot up what we have so far:

With Brio-R returned to the system and the NAD’s external phono-pre swapped out for USB DAC, our wallet no longer accommodates the Debut Carbon. Pushing down the Pro-Ject range to an Elemental (US$275) still tips the scales a little too hard – the total comes in at US$1548. Time to return to the US$99 Audio Technica LP-60 whose rear panel allows for switching between line (pre-amplified) and phono (not pre-amplified) output levels.

A bonus can be netted from this turntable quality sacrifice. There’s now enough slack in the dollars department for the Schiit Vali (US$129), a hybrid headphone amplifier that runs rings around both the NAD’s onboard solution and the Dragonfly’s 3.5mm output. Connect it to the ‘Record out’ on the rear of the Brio-R and all manner of headphones can come out to play.

Then there’s the NAD aptX-compatible Bluetooth input. No need to hook visiting friends into one’s home wifi network when a smartphone can be paired with the NAD directly for instant phone-to-amp digital audio streaming. How’s that for show- and store-demo accessibility? Don’t sweat the fact that Bluetooth’s lossy transmission system doesn’t sound as wholesome as going USB direct with lossless files; it’s the NAD integrated’s accessibility that matters most here.

From Bluetooth’s base camp with smartphone or tablet the upgrade path points ever upwards. Next stop might be an Apple TV connected via optical. NAD understands that it’s Toslink – and not coaxial – that dominates the world of consumer electronics. A USB-lassoed computer sits further still along our upgrade trail. For the entry-leveller, lowering the computer’s jitter with a USB-S/PDIF converter or applying an electrical noise filter to its USB output comes later.

The point is that terrific sound can be had from the get go with a US$500 integrated amplifier and US$129 loudspeakers. This NAD/Pioneer combo rivals the KEF X300A on performance and surpasses it on functionality, all for less cash down. What’s not to like about that?