Idealists – they demand the best sound at any price. It’s an approach that invariably results in air strikes to the bank account. Astell&Kern launched their first digital audio player in 2013. The AK100 sold for US$699 and it impressed almost everyone that heard it. I reviewed it here. The general consensus was ‘good…but not cheap’.

More pragmatic users (like myself) were delighted that the AK100 easily bested the sound of their smartphone and iPod but our idealists were predictably tougher nuts to crack. In the months following the AK100’s launch, forum chatter and comments sections gathered pace to form a two-pronged attack: that side-mounted volume rotary – so exposed! Never mind that the bar to which the pot was attached traversed the entire width of the unit’s internals, it looked like one false move would decapitate it. And that output impedance: 22 Ohms! Quelle horreur! Never mind that plenty of headphones would pair just fine with this newcomer.

Astell&Kern did what any sensible business would do: they took the idealists’ desire for perfection (read: never happy) all the way to the bank. The AK120 arrived (review here) with a casework extrusion designed to shield the volume pot and a lower output impedance: 3 Ohms. It sold for US$1299. Then came a MK2 AK100 (US$799) with lower output impedance. The AK120 outsold the AK100 three to one at a time when Astell&Kern were still finding their way through a category they would ultimately come to re/define.

A year later came radically overhauled second-generation versions of the AK100 and AK120: taller, heavier, and shinier. Out went the Linux OS and Wolfson DAC chips of yore. In came Android and Cirrus Logic as well as an improved headphone output stage, 2.5mm TRRS balanced socket, a larger touchscreen and Wifi streaming. If you wanted in, the AK100 II would set you back US$899, the AK 120 II US$1699 (reviewed here).

Then came the unit that would really get summit-fi-ers salivating: the AK240. The market appeal didn’t just lie in the Escher-esque chassis or an ability to decode DSD natively. At US$2400, the AK240 is an out-and-out luxury item to be paraded in front of friends. Exclusivity through pricing and premium features, the AK240 currently outsells every other model in the range.

At Munich High-End this year we saw Astell&Kern inflate the high end DAP bubble further still. To get into the AK380 game you’ll need thirty-five hundred of your finest Earth dollars. Youch! Heaven for idealists with deep pockets but for pragmatists, wtf?!

Panic not. Astell&Kern’s play from left field just prior to Munich reminds us that they haven’t forsaken mortals with considerably less disposable cash: the AK Jr. (US$499) packs an almighty wallop for such a tiny device and it could be the South Korean company’s finest offering so far.

To see why, we need to re-calibrate perspective.

The AK Jr.’s slender physique is Astell&Kern gone Lite n Easy. You don’t need a spec sheet to tell you this is their thinnest and lightest player to date but for those readers yet to go hands on: the 8.99mm thickness at the upward-facing single-ended 3.5mm headphone connector tapers down to 6.99m at the unit’s base. The volume pot’s relocation to Junior’s underbelly is an ingenious move.

Matters of aesthetics are more subjective so let’s not make it about you or me. Instead, ask yourself which DAP has the greater mass market appeal: the AK Jr.’s sleek industrial styling and its 7.9cm touchscreen or the Pono Player’s toblerone form factor and its 6.4cm touchscreen?

Moreover, convincing your average smartphone user that a ~$500 DAP is worth the moulah means a touchscreen is a must have. Rival models coming to market that don’t meet this modern day screen standard face harder yards. The AK Jr.’s screen resolution doesn’t compete with an iPhone – you can see that from just looking at it. Junior looks quite a bit more agricultural compared to the Cupertino device but it gets the job done. The layout of the AK Jr’s interface is Astell&Kern’s most organised and intuitive to date.

If, like me, you don’t dig having to use Android File Transfer app to get tunes from the OS X desktop to the any of Astell&Kern’s other models then you’ll be pleased to learn that with a Linux O/S in play on the AK Jr. we note a return to drag and drop file loading. Rejoice!

Linux also means no Wifi connectivity. Absent too is the 2.5mm TRRS balanced output socket so beloved by high end users. Pragmatists won’t see an issue with either feature set omission. You can’t everything for US$499.

Output impedance is a respectable 2 Ohms – a full 20 Ohms lower than the original AK100. The AK Jr. should see most users right with all but the lowest impedance measuring IEMs. During my listening sessions, I witnessed zero evidence of bumps or dips in the AK Jr.s frequency response with either the Campfire Audio Orion or the A&K-collaborating Jerry Harvey Layla. The same clean, exacting and oddity-free audio spilled from a pair of custom fit Ultimate Ears UE 7 Pro, which sound somewhat off when driven by a Pono Player. 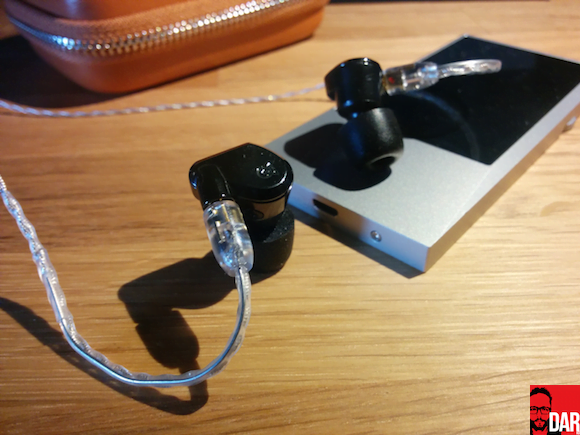 With full-sized portable ‘phones, the AK Jr. sounded terrific with the OPPO PM-3. Perhaps a little dry at times but certainly nothing worth kicking up a stink about.

Paydirt was struck with Master&Dynamic’s MH40 (reviewed here) whose inherent fat, chunky qualities play the perfect counterbalance to Junior’s clean(er), lean(er) presentation; which also matches well with the soup-thick midrange of the Cardas EM5813 Model 1 and affection lent to transient delivery by the semi-open AudioQuest NightHawk. Not three years ago such portable audio satisfaction would have been unthinkable. That the MH40 also step up with similarly impressive ‘executive’ styling to the Astell&Kern player is a bonus.

Moving from outward beauty to inner workings, the AK Jr. sees Astell&Kern return to Wolfson decoder silicon – this new DAP uses the same WM8740 chip as found in the original AK100/120 and handles up to 24bit/192kHz PCM and DSD (via a priori PCM conversion). However, the AK Jr. doesn’t coat transient nuance with as much warmth and softness as the original AK100/120; if you enjoy the latter’s sound, stick with it. It’s also not as full in the bottom end or as rich sounding as the AK120 II. The latter difference is mostly attributable to the AK Jr.’s leaner mid-bass. Think of the difference between your average Pinot Noir and Cabernet Sauvignon and you’ll know where I’m coming from. 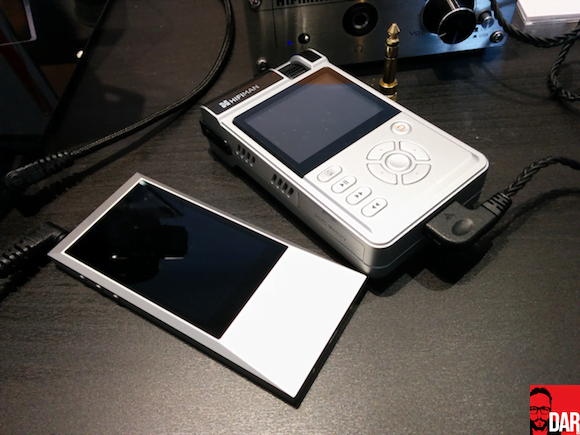 The AK Jr. comes on zippy and clean, their most transient-energetic voicing to date. It sounds closest to the Sony NWZ-ZX1 (reviewed here and here), captivating the mind before intoxicating the heart. The Ak Jr’s top end doesn’t offer the golden-hued, honeyed-dipped vibe of the Pono Player (reviewed here).

For summit-fi-ers already won over by the sound of higher-end Astell&Kern models the AK Jr. might provide the necessary brand-matched context from which to re-asses their favourite player’s inherent portability; especially those on the cusp of strapping an outboard amplifier to an AK240! Either enjoy it for what it is/does or consider selling up and downsizing to the AK Jr. to which appending a third-party amplifier makes more financial and form-factor sense.

What of the pragmatist looking up the hill from his smartphone for the first time? Ascending to hill brow and looking downward, the AK Jr. sounds better than each of the mass-market devices I own. I hear better separation, clarity and frequency extension than the iPad 2, Google Nexus 5, Samsung Galaxy S5 and iPod Touch 5G. No contest. I think it’s a safe bet that if you’re prepared to offshore music playback to a separate DAP and carry a second device then you’ll be rewarded with a far more satisfying music experience. The AK Jr.’s ectomorphic body type means you won’t be hauling too much in the way of extra ass.

AK Jr. amelioration doesn’t just apply to street life. With this portable also deployable as a USB DAC it’s worth noting that it dumps on your average PC’s headphone output from quite the height, thus exposing the computer’s on-board sound card for the fifty-cent part that it is. 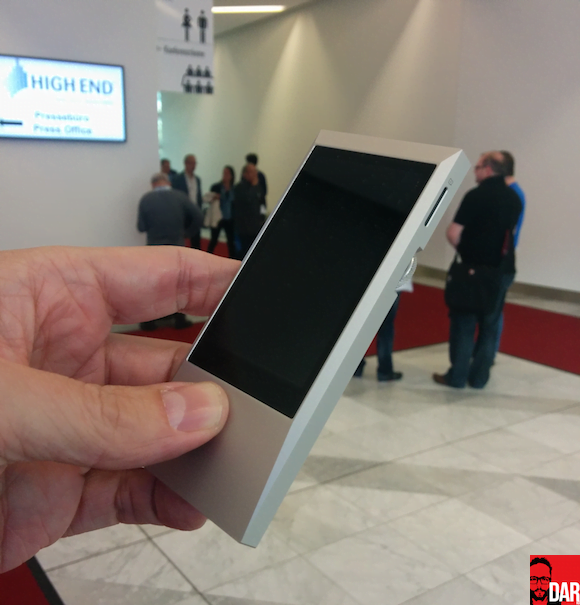 At least, that’s the theory. I’ve used the AK Jr. on a daily basis since the Munich High-End Show. It takes time to get to know a product, what it can and can’t do and whilst concluding this review I uncovered a kink in the AK Jr.’s otherwise faultless value proposition. Underpowered USB ports found on some host computers don’t like the miniature AK as a USB DAC (mine’s running firmware v1.02).

On a 2013 Macbook Air, OS X announces the Jr. as an available USB sound device in the preference panel but upon selection no sound spills forth – a result echoed by this Head-fi user.

The Microsoft Surface Pro 3 presents with the same issue: device recognised by the host OS but no sound. The Linux-running Antipodes DX doesn’t see the device at all. Instead the AK Jr.’s own OS locks up, necessitating a device reboot. A compromise to be worn square on the chin by pragmatists (for now at least).

Let’s hope Astell&Kern can sort this quickly because the headline written by the AK Jr. for newcomers contemplating their first DAP is not to be missed: it’ll sound way better than your existing smartphone and compatible computer. If you’ve already dropped cash on a nice pair of headphones and are contemplating “What’s next?” the Astell&Kern AK Jr. will bring them to life at home, on public transport and at work. 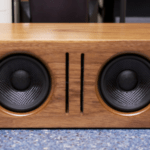 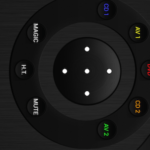