With so many headphones coming to market each year the solo reviewer must extract the wheat from the chaff. I’ve already covered two biggies for 2015 – Audeze’s EL-8 and MrSpeakers’ Ether – and after hearing them in both Las Vegas and Sydney already this year, an AudioQuest Nighthawk review sample already awaits my collection in Irvine, CA next weekend.

So – which cans to bang at Munich High-End?

Answer: ENIGMAcoustics’ Dharma D1000. Both Srajan Ebaen and Scot Hull had ear marked them as contenders on day one. It took me a further two days to get my head underneath the preproduction pair. Ebaen and Hull were not wrong. Illumination in and above the upper midrange is truly righteous. 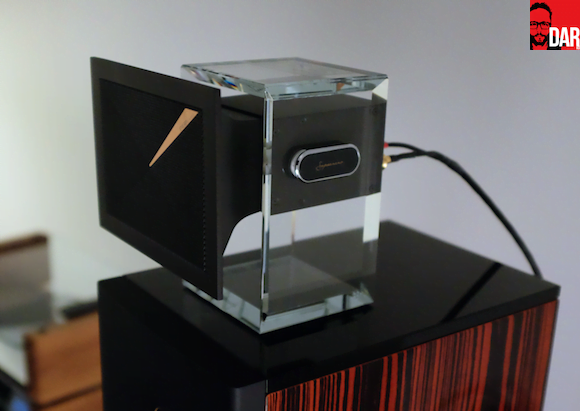 What’s engineering sorcery was this? Electrostats…and not your Father’s electrostats. The Dharma D1000 are the engineering descendant of ENIGMAcoustics’ success with adding electrostatic super tweeter goodness to a dynamic multi-way loudspeaker. Case in point: their Sopranino super-tweeter forms part of the Mythology M1 standmount system, as seen/heard in the prefab room that formed the bulk of ENIGMAcoustics’ Halle stand.

The Dharma D1000 mirrors this same hybrid approach: a dynamic driver plays widebander before a self-biasing electrostatic driver crosses over at 10kHz. According to our host Wei Chang it’s a “super light membrane pre-coated with electrons that requires less voltage to get going”.

Say hello to 26 Ohm impedance and 95db sensitivity. These headphones are super easy to drive – a point that ENIGMAcoustics drove home just as easily with an iPad source. Alas, the Apple tablet contained every audio show cliché of the last ten years: Particia Barber, Diana Krall and Jennifer Warnes? Nein danke. I whipped out an original Astell&Kern AK120 and made with David Bowie’s “Rebel Rebel” – the crisp-crunch heard in the ever-circling guitar riff = wunderbar! (Nope – that isn’t Mick Ronson’s axe, it’s Bowie himself).

The Dharma D100 weigh in at ~400g and thus sit on the right side of comfortable for long listening sessions. Production proper will begin in July and pricing is expected to come in at US$1200. Very much a one to watch. Ditto ENIGMAcoustics’ Class A, hybrid SET/MOS/BJT, glass-walled Athena A1 tube amplifier at US$1500. 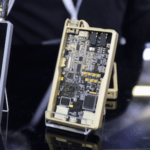 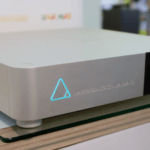