“Heartbreak hurts but you can dance it off”. Clearly The Hold Steady’s message of cutting a rug to ease the pain has yet to reach Björk. Her eighth studio album loosely documents the dissolution of her long-term relationship with artist Matthew Barney.

The album title gives the game away up front: Vulnicura translates as “cure for wounds”. This ain’t no party album, it’s a brooding, majestic ache for something gone. Lush string arrangements sit atop meticulously crafted beats. On two cuts, programming comes from The Haxan Cloak (“Family”) and Spaces (“Quicksand”). Björk delivers an understated vocal performance throughout, positioning Vulnicura as closest genetically to 1999’s Vespertine. (I’ve never really been one for her shriekier stuff).

An Internet leak kicked Vulnicura’s official release from March to January but CD and vinyl are formats are holding fast to the original schedule. You can’t yet stream it on Tidal, Qobuz or Spotify either. The latter reports the omission like this:

I snagged all three from Bleep.com so as to be confident that each are derived from the same master.

“We are a startup in digital audio processing, just releasing our new product MusicScope which is a music microscope to do a deep analysis of audio tracks. It is our goal to offer the hi-fi enthusiast a tool he can use to do a fast analysis on his digital audio tracks, whether it be DSD, FLAC, ALAC or WAV.”

“Our first reference customer, who operates an online store to sell high resolution music, is HighResAudio in Germany. They use the MusicScope to do perform quality checking on their new releases, verifying whether the records are really up to native studio master quality.”

MusicScope sells for the not unreasonable amount of €24.37. That’s just shy of US$30 at present exchange rates.

The all-black user interface is simple to use: load in a file – or files – and hit the microscope button to kickstart the analysis. A live reports is generated as the software works its way through the track. Text and graphical formats are saved to the song’s hard drive location upon completion.

To properly baseline all three editions of Vulnicura, the 16bit/44.1kHz (CD version) of opening track “Stonemilker” was the first to see MusicScope treatment.

Before the results, we need to consider a little digital audio theory. The Nyquist–Shannon sampling theorem states that the digital encoding of an analogue signal at a sample rate of XkHz will be sufficient to capture all frequencies up to a limit of 0.5XkHz. In the case of Redbook CD’s 44.1kHz sample rate that means all frequencies up to 22.05kHz are captured in the encoding process.

In theory, the limit of human hearing is 20kHz so a CD should cover all bases but the majority of ears over 30 years probably won’t reach that high. Hearing degrades with time and abuse, leaving the majority of middle-aged folk with upper limits of 16kHz or 17kHz.

However,we don’t expect to be short-changed when buying a CD or lossless download. The MusicScope analysis of our 16bit/44.1kHz-encoded Björk file should show its frequency range extending up to 22.05kHz… 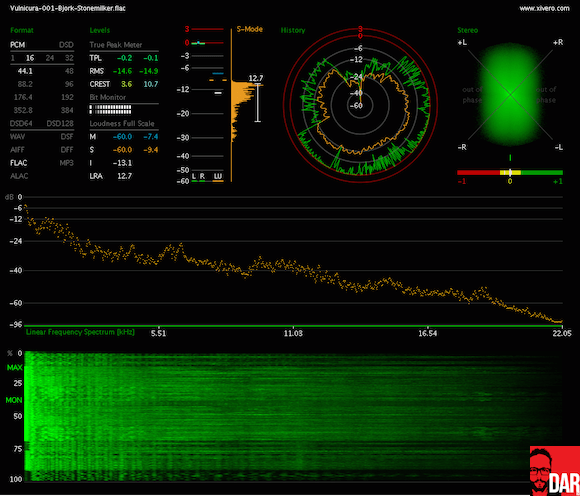 And the green ‘smear’ at bottom of the graphical report shows precisely that. In the gently downward sloping orange data plot above it you’ll note the upper limit of 22.05kHz measures close to -96db. That’s also good news: 1bit of data depth is equivalent to 6db of dynamic range. 16 x 6db = 96db, just as we’d expect from a 16bit file.

Now let’s see what a 320kbps-encoded MP3 of the same song looks like: 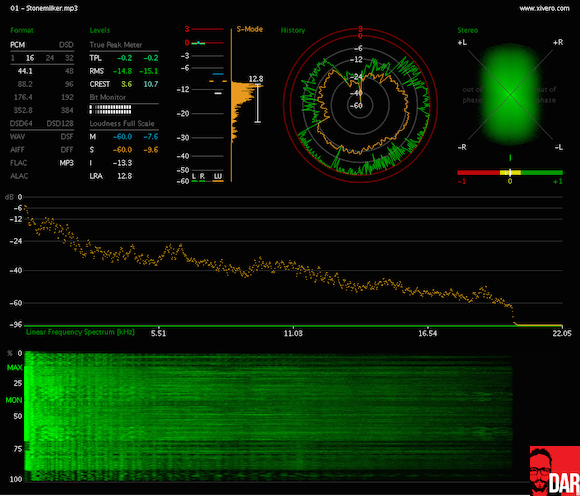 Note the upper frequency limit is low-pass filtered around 19kHz? Lossy compression relies heavily on psyhcoacoustic theory to reduce file size by (among other things) removing the very highest frequencies that we supposedly cannot hear. And yet listening to this MP3 next to the lossless version via Chord Hugo and Beyerdynamic T1 headphones exposes the compressed version as relatively tense and nervy. In view of the additional two bucks required for the lossless download, why wouldn’t you?

Time for the 24bit/96kHz analysis. Drawing once again on the Shannon-Nyquist theorem, we’d expect to see a frequency range extending all the way to to 48kHz: 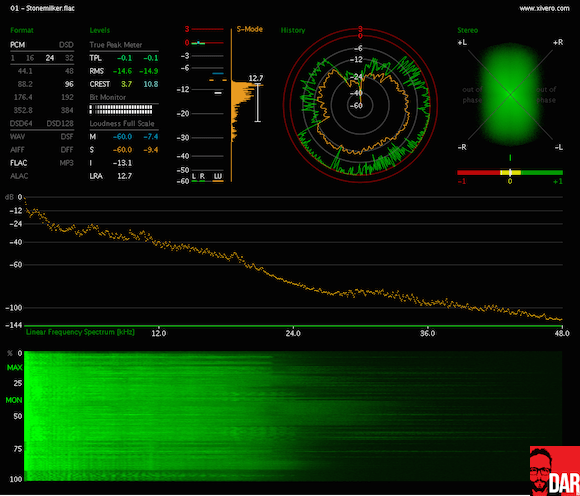 Do we see that? Yes we do. Also note the file’s higher dynamic range – it’s closing in on 140db. That tallies with the expected theoretical value of 144db (24bits x 6db).

Our MusicScope analysis indicates nothing to suggest that this hi-res release is a direct up-sample of the Redbook version. This shows up in listening tests too with the hi-res version sounding that bit more easeful and relaxed than its Redbook cousin but the delta is far from major. Careful: this difference might not just be a matter of ‘more data’. The digital filter’s ringing being shifted out of the audible band also helps. More info on this here.

Asked to put a number on it I’d probably peg the HRA as a 5% improvement over the CD version. Is it worth the extra US$4? For now, yes, probably. However, as soon as Vulnicura drops into the Tidal or Qobuz lossless streaming catalogues, its value for money quotient will take a serious hit.

Subscription streaming services are slowly killing the download market whilst knifing the back of music piracy along the way. Where’s the incentive to buy the MP3 version of Vulnicura for US$10.99 when the same cash nets a month’s worth of Spotify Premium (and access to millions of songs)? And if you’ve not stumped up to kills the adverts, a lossy version can still be streamed for free. The need to hit up your favourite torrent site is all but dissolved.

The audiophile world likes to make a lot of fuss about the benefits of hi-res audio but the conversation quickly shifts to a mumble once the issue of pricing is raised. At US$15.99 for the 24bit/96kHz, juicing that little bit extra from the latest Björk album doesn’t come cheap. That’s fine for audiophiles who want the very best but the minor audible improvements fail to support an argument for broader adoption by Joe Public and his mates. 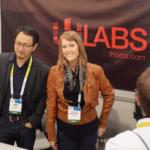 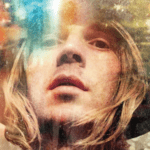