Before Neil Young made a motza with his PonoPlayer on Kickstarter there was LH Labs, a spin off from the house of Light Harmonic – the guys who brought us the Da Vinci DAC that sells for US$20K.

Electronics engineer and founder of Light Harmonic, Larry Ho mapped out the internals whilst personal friend Raymond Ray added the DAC-in-space look. The Da Vinci’s industrial design isn’t just about making things easy on the eyes – there are engineering reasons behind its bold form – but the Da Vinci’s striking appearance is undoubtedly a key factor in driving curiosity among potential buyers as well as those who could never afford to own one.

Standing out from the crowd is central to Light Harmonic’s modus operandi. Tapping the crowd’s collective wallet is central to subsidiary LH Labs’ sales model.

LH Labs were pretty much the first audio company to fund audio products via Kickstarter and Indiegogo and VP of Sales & Marketing Gavin Fish is adamant that the crowdfunding model is the future of hifi hardware sales for LH Labs.

Before we consider what’s new, let’s look back at their previous campaigns.

First up was the Geek Out, launched in mid-2013. Originally called Geek and referred to in LH Labs marketing parlance as a ‘USB Awesomeifier’, Geek Out was a dongle-sized USB DAC and headphone amplifier with Class A output stage (which is why it runs hot). Design-wise it’s not as nicely finished as the AudioQuest Dragonfly but it packs a punch where it counts. 2146 backers saw the Kickstarter funding campaign raise US$303,061. Not exactly chump change.

After several delays and some wailing and gnashing of teeth on forums, production units finally began shipping in mid 2014…

…but that a good while after LH Labs’ second crowdfunding campaign had come and gone. The Geek Pulse – a desktop-centric DAC and headphone amplifier – precipitated a move from Kickstarter to Indiegogo where they raised US$2.6M! Crowdfunding audio products was suddenly serious business.

Photos pulled from the campaign page at launch had the Geek Pulse looking like this:

However, the Pulse I witnessed at RMAF almost ten months later was a different beast entirely. LH Labs’ desktop unit had mutated into an ‘X’ version (with dual mono configuration, rear-facing XLR outputs and four-pin XLR headphone output) and an ‘Xfi’ version (which took the ‘X’ and loaded it up with a dual Femto clock upgrade and better components). Then there was the outboard LPS power supply sitting underneath that promised another step up in performance.

Optioning a GeekPulse was no longer as simple as it was at the campaign’s outset. Little wonder the final release date was pushed back more times than Guns n Roses’ Chinese Democracy.

Units that began shipping (almost a year later) look like this: 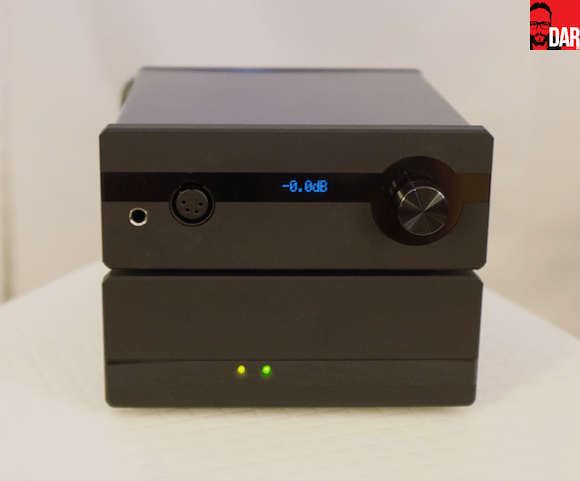 Why the big difference? LH Labs not only crowd-source funding, they crowd-source design and functionality. Members of the LH Labs forum, now referred to as GeekForce, are regularly solicited for input on feature set suggestions and implementation.

According to Fish, this commitment to crowd-sourcing product design is the number one reason production deadlines get pushed back again and again.

Time to hold our horses. Notice something different about the Wave’s chassis? It represents quite a design leap from the more utilitarian-looking Pulse. I took this photo of its underside at LH Labs’ stand at CES 2015: 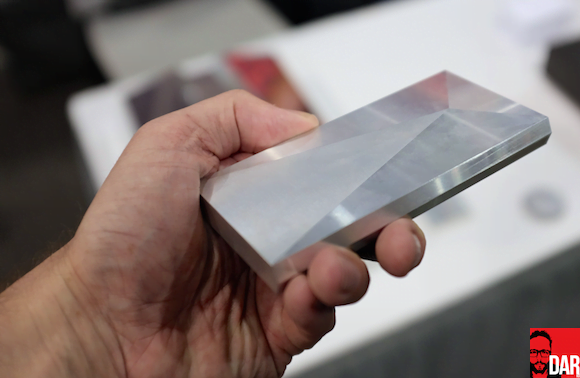 Kayla Bejsovec is what. She’s LH Labs’ latest hire, an industrial designer fresh from graduating The Art Institute of California in Sacramento. With the young’un now at the helm of look and feel, LH Labs products stand a fighting chance of hanging tough with the Da Vinci DAC that kickstarted it all. Pun intended.

There’s more. Also on show at CES was a new, larger metal chassis*: 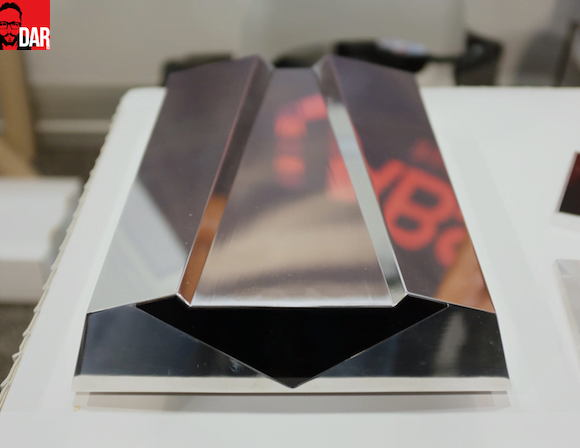 Bejsovec is taking Messrs Ho and Fish into new territory. Despite visually recalling your Father’s sci-fi – the Cylons from Battlestar Gallactica – this is isn’t you’re your Father’s hi-fi.

This week, LH Labs’ fourth crowdfunded hi-fi project arrived. It’s called Vi and it starts with a DAC that looks like this: 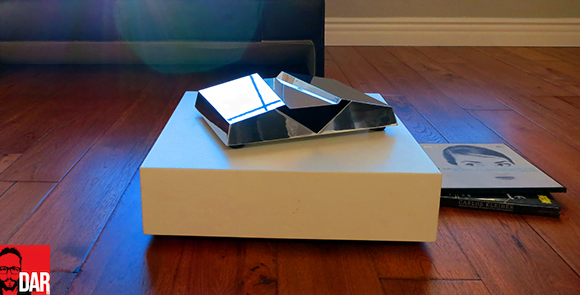 Technically, the Vi DAC isn’t new. It first appeared as the Geek Soul when the Pulse campaign was switched to Indiegogo’s ‘Forever Funding’. With Pulse units now shipping and the funding allowed to run indefinitely, the sales model begins to approximate a more traditional web storefront.

Not everyone is impressed with the looks: “I’m surprised by Vi’s specification and its eccentric industrial design. I cannot see it fit into my living room at all. I will pass.”, read one campaign comment.

There’s function to the form. Non-parallel walls promise greater immunity to internal vibrations that might otherwise convert into electrical noise, the sworn enemy of digital circuits. 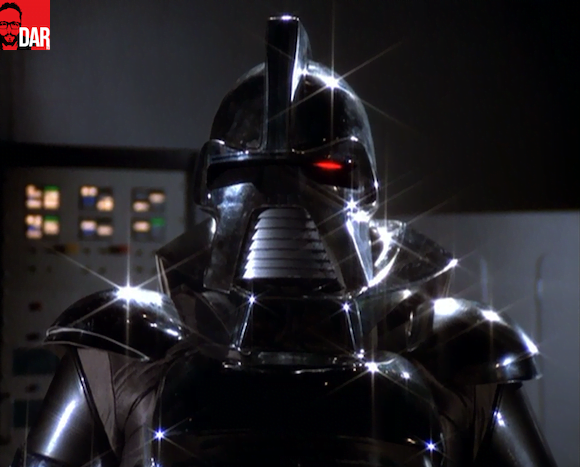 The 9018K2M, intended by ESS for “audiophile-grade portable applications like HiFi mobile phones and digital music players, consumer applications like USB DACs…”, comes as standard. Be careful not to confuse this with the higher-performing and more costly ESS Reference 9018S chip.

A base Vi DAC unit (dubbed ‘Xfi’) will run you US$1699 but as previous LH Labs backers will attest, there are myriad upgrade options from which to choose. To the untrained eye things can get complicated very quickly.

The first option to consider is upgrading the DAC chips to the ESS’s all-new 9018AQ2M. That’ll be US$22. 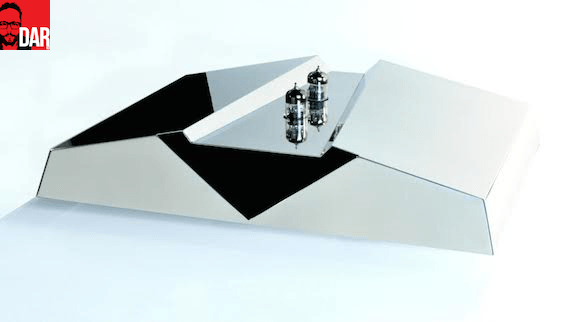 Our Ark of possibilities rears its head once again with a 6922 tube buffered output stage that lifts the sticker to within a smidge of US$2K. The clever part is that opting for glass and gas means no surrender on the solid state output – it stays put.

Going for the Vi DAC Tube iteration means you have three analogue outputs from which to feed your pre-amp or integrated:

Need a fourth? A balanced tube buffered output complete with Lundahl transformers and Neutrik XLR connectors will run you an additional US$479.

I asked Fish if all outputs would run simultaneously and if this would somehow degrade the sound of each. He turned to chief designer Larry Ho for an answer:

Having recently addressed the issue of ‘Why Looks Matter’ in the Union-Jacked Rega RP6 review, I welcome any break from the norm. In the amplifier space silver and black boxes are abundant; the Vi DAC is different in both form and function.

More so than the funding method that will bring it to life, it’s this DAC’s aesthetics that see me giving it the nod here. However, it’s plain from the reader comments that followed my previous article on (covering) crowdfunded products that the guys at LH Labs have some work to do in managing backers’ expectations, particularly when it comes to delivery dates.

If LH Labs’ history with crowdfunded products is anything to go by, know that the design will likely see further functional changes before it arrives thanks to the input of Geek Force. This will likely affect the Vi DAC’s ultimate shipping date. If you’re the kind of person that clings to certainty then proceed with caution.

To those that do sign on as a Vi DAC backer, you’re in for one helluva ride. Hopefully it’s a ride that ends with a striking piece of hardware in your rack that serves as both D/A converter and conversation piece.

At time of writing you have thirty-seven days to decide either way.

*The CES-shown chassis isn’t intended for the Vi DAC but for the forthcoming Vi amplifier which promises to measure deeper but narrower than its D/A converting cousin.