Barry: G’day Darko!
John: Hey Barry, how are you? Long time, no see. You still rocking that Wyred4Sound Remedy with your Squeezebox Touch?
Barry: Sure am. It’s terrific. I’ve brought that very same Squeezebox along today, just as you asked. What do you need it for?
John: Well – I’ve got something I want you to hear…
Barry: Uhuh.
John: …but it’s a bit, shall we say, controversial.
Barry: How do you mean?
John: AudioQuest have loaned me some of their Ethernet cables to play with but a good number of readers refuse to believe that they could possibly make a difference to sound quality in a hi-fi system even before I plug the darn things in.
Barry: Ohhhhhh?
John: My previous two articles on the subject caused quite the stir, predominantly with readers who’d never heard said cables but instead demanded scientific justification before they’d even countenance the possibility of audible differences.
Barry: Seems fair enough to me. I can sympathise with their position on that one.
John: Yes, but a good number of people are more eager to shout accusations of snake oil from the rooftops than they are to sit down and listen. 37% of 350 people surveyed via DAR said as much.

Barry: Oh yes, I remember reading that article. You also heard differences from these cables at shows Munich and Denver, did you not?
John: I did indeed…but let us be clear form the outset today: these AudioQuest Ethernet cables are of zero benefit to anyone moving data between computers and/or network storage devices. Ones and zeroes being moved where arrival timing and electrical noise aren’t critical factors won’t gain anything from more deluxe wire, not even a US$7K cable…as UK tech publication The Register was keen to point out recently. I suspect author Richard Chirgwin is applying data centre logic to the audiophile world. The two are NOT the same.
B: OK. Well, I gotta admit it: I’m a little skeptical. Don’t tell me we’re going to listen to a multi-thousand dollar Ethernet cable today?
J: Haha – no. This entry-level Pearl Ethernet cable will run you US$25 for 0.75m. Hardly outrageous. The cable comprises solid copper conductors with a polyethylene insulator – more info can be found on the AudioQuest website . Even a cursory inspection shows the Pearl to be better made than a generic patch cord. Have a look for yourself.
B: I see what you mean. It looks and feels more substantially made than the other cable you’ve got here. Is that another AudioQuest number? 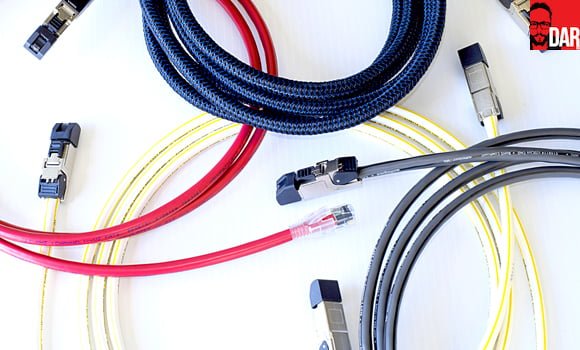 J: Nope – that’s a Cat6a cable from Blue Jean. They don’t do a Cat 7 equivalent but each of their Ethernet cables ships with a full measurement report confirming its conformity to the category standard.
B: Oh yeah, I think I remember that Blue Jean chap’s article on Ethernet cables. He sourced and measured a whole bunch of them and found them to be of wildly different quality, with many not meeting the specifications.
J: That’s the fella! Anyway, his Cat 6a (US$18 for 6 feet) will be our control cable today.
B: So we’ll listen to the BJC first and then the AudioQuest?
J: Yessir. I’ve done this experiment many times already with the AURALiC Aries streamer so I’m going to switch them and leave you to comment on what you do or don’t hear.
B: Just let me grab my tin foil hat from upstairs.
J: Hahaaaah. Very funny. Oh, one more thing before we start: this particular Pearl cable has been sourced from of an AudioQuest bulk spool and terminated with Telegärtner connectors (US$20 each).
B: So it’s a bit more expensive than the US$25 floated earlier?
J: Yes, this bulk spool version sells for US$1.60/ft and can be terminated with either standard connectors (US$2.50 each) or the Telegartners (US$20 each). However, today is as much about audible differences existing and less about what separates each cable from a technical point of view.
B: Gotcha! 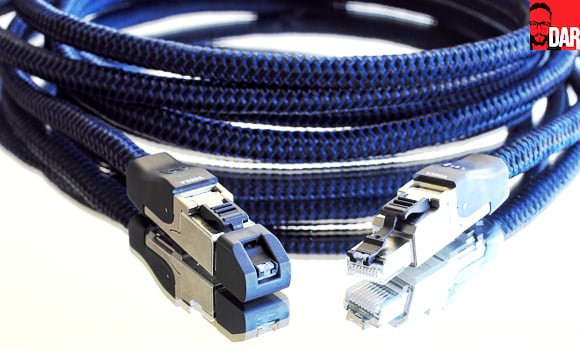 J: I’ve hooked up your Squeezebox Touch to the Peachtree Audio 220SE DAC/amplifier with a Zu Audio digital coaxial cable. Loudpeakers are the Soul MKII, also from Zu Audio.
B: Right…
J: The Squeezebox Touch will be fed data from the Antipodes DXe server over Ethernet via this cheap-as-chips Netgear router. Standard patch cord connects server to router but we’ll be swapping out the Ethernet wire that joins the router to your Squeezebox Touch. I’ll play some snatches of Johnny Cash, Peter Gabriel, Radiohead, Leftfield and Beck with one cable, swap it for the other before playing those same song snippets again. You ready?
B: Ready as I’ll ever be.

J: What do you think? Comments? Which one sounded better to you?
B: It’s not night and day – far from it – but I reckon the second one sounded slightly less revealing than the first.
J: Right – go on…
B: The first one had more micro-dynamic jump. I wanna use the word pizzazz.
J: That’s a good word!
B: Come on Darko, don’t keep me in suspense – which was which?
J: The first cable, the one you preferred, was the AudioQuest Pearl.
B: Holy smokes.
J: Right?
B: I mean, Ethernet cables should all sound the same but from what I’ve just heard, they don’t.
J: What’s interesting is that the Pearl is audibly superior to the Blue Jeans cable, one that we already know is well within spec. 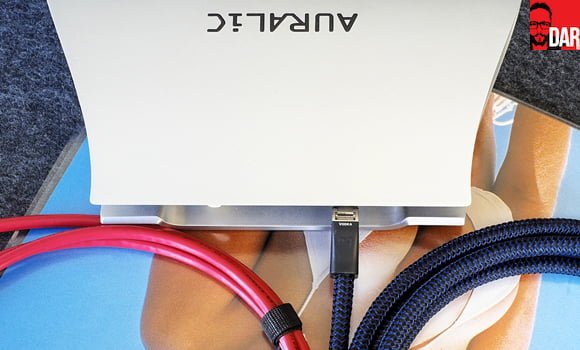 B: Let’s not get carried away though. We’re talking about differences of only one or two percent.
J: I’d go with that.
B: I have to ask though: WTF?
J: OK, so now we need to think about why these two cables result in slightly different sonic outcomes. Whilst I think this is mostly for engineers to explain, I believe the pivotal factor is electrical noise.
B: How so?
J: Audio hardware is extremely sensitive to electrical noise. Take the Antipodes DXe. Its designer Mark Jenkins is obsessed with minimising electrical noise when designing his servers so that less of it messes with the digital signal inside the box and less of it travels down the USB cable and into the DAC – an extremely noise-sensitive system. Now let’s apply that same logic to what we’ve heard today: what if my Netgear router spills electrical noise to all Ethernet-connected devices? That noise is reaching your Squeezebox and messing with its ability to sound optimal. Even if we discount noise affecting data timing – the Squeezebox will verify that all data packets have arrived safely before re-clocking them out to the Peachtree DAC – the electrical noise is still getting a free ride from router to Squeezebox, polluting its circuits. That noise could even journey further to the DAC.
B: I see what you mean. So all this makes not a jot of difference to the data centre operators you mentioned earlier? That computers not used for audio or video don’t care about the levels of electrical noise.
J: Precisely. I suspect that AudioQuest’s Pearl Ethernet cable is constructed in such a way that it reduces the amount of electrical noise reaching the Squeezebox from the noisy router. The data arrives safe and sound as per the protocol – that’s not the issue here – it’s the amount of noise getting a free ride along the way.
B: Riiiiiiight.
J: Are you being sarcastic?
B: Haha. No, not at all. Clearly something is going on. And it’s not bad for a US$25 upgrade. Well, in the case of the Pearl cable you have, a US$65 upgrade.
J: OK – wanna hear a fancier AudioQuest Ethernet cable? I have their Vodka model. It adds silver plating to the conductor material as well as something AudioQuest refer to as their Noise Dissipation System (NDS) about which you can read more here. The Vodka starts at a heftier US$249 for 0.75m.
B: Sure – what have I got to lose?
J: I’ll conduct the same A/B process as earlier but this time with Massive Attack’s “Teardrop” and David Bowie’s “Bring Me The Disco King”. In the ring: Pearl vs. Vodka. 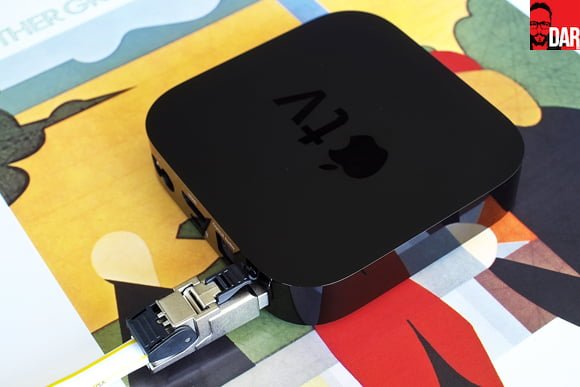 B: I reckon I can pick the differences more easily there: the second cable was the Vodka.
J: Correct.
B: I hate to sound like you Darko but the Vodka seemed to remove a layer of film for superior textural reveal. There was also a shade more tonal depth and recording space ‘air’. Most noticeable of all was a further uptick in micro-dynamic jump. More pizzazz yo!
J: I concur. I’ll finish today’s listening session with something that’ll mess with your head a little more. I’ll leave the Vodka cable between router and Squeezebox but now I’ll swap out the standard patch cord that sits between DXe server and router for the Pearl. And then I’ll swap the Officeworks-sourced patch cord back in again.

B: Oh my word! This is really gonna get the snake-oilers going but the Pearl in its new position brings yet another minor improvement to proceedings. Mental.
J: Some readers will no doubt think we are. Oh well, can’t do much about that. I’ve found all of the above results repeatable with the AURALiC Aries Streamer so I know it’s not just the Squeezebox Touch than can benefit from audiophile-grade Ethernet wire. You could even try it with an Apple TV as digital audio source. Until next time, Barry…

New video now up on the YouTubes. #darkoaudio

New video now up on the YouTube channel. #ambient

For my latest Patreon VLOG, I take a trip to where

Shooting a video in a snowstorm. #darkoaudio #snow

Gute Luft by Thomas Fehlmann is one of the finest

Reaching 150K YouTube subscribers is a time for gr