Getting a great sound between your ears is as much about dialling down external noise disturbances as it is to the type of transducer chosen or the way those drivers are implemented.

Active noise cancelling headphones deploy a microphone and a feedback circuit to counteract ambient noise but if full-size cans aren’t your thing then going fully custom with in-ear monitors (CIEMs) might be. Custom-fit earphones were originally conceived for rock musicians as an alternative to fold back monitors and now they’re becoming popular in the consumer audio space.

Getting the perfect seal between IEM and your ear canal is critical. Everyone’s ears are different so a trip to an audiologist is mandatory. The audiologist injects your ears with a silicon compound to take an accurate mould of each one. No, it doesn’t hurt and the whole process is over and done in less than twenty minutes.

I first had my ears moulded by a Sydney-side audiologist a year or so ago in preparation for the Kind C-Ear X review (here). 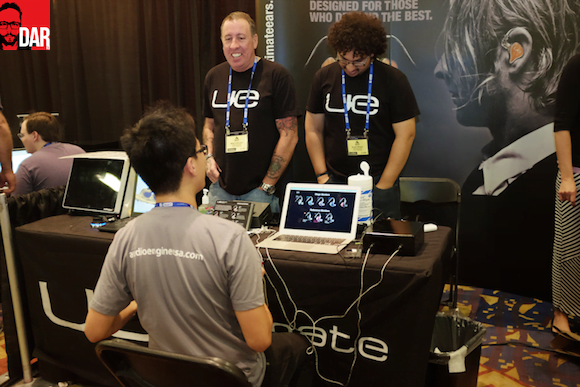 Based in Irvine California, Ultimate Ears (‘UE’) was founded by Jerry and Mindy Harvey in 1995 before being purchased by Logitech in 2008. Logitech maintain UE as a separate brand despite it operating as a subsidiary to the tech giant. Jerry Harvey has since gone on to manufacture a successful line of IEMs under his own name.

Ultimate Ears’ point of difference in an increasingly crowded market segment is speed. Sales Director Mike Dias explains that he wants the whole process, from audiologist visit to finaly delivery, to be a matter of days and not weeks.

At Canjam 2014, Ultimate Ears could be found walking the talk, a new workflow methodology laid out on along their table with an audiologist on hand to take ear-moulds. Right there and then I had silicon foam squirted into my ears whilst I bit down on a ‘spacer’ block; most CIEM manufactures stipulate that the mouth should be held open slightly whilst moulds are taken. That was the easy part.

Choosing which of the Ultimate Ears range was most to my liking was trickier. It would have been easy – not to mention gauche – to opt for the most expensive model. Thankfully Dias had a box o’ tricks up his sleeve that took the crapshoot out of choosing one model from a choice of eight: five ‘Stage’ and three ‘Reference’.

A special demo pair of universal IEMs containing all the drivers needed to emulate any given UE model was direct wired into a ‘magic’ black box. (No DSP, think of it as an active crossover). Fire up some music on the Macbook before using the UE Demo app to click-roll through the range of in-ears. Making a software selection causes the black box to activate the corresponding balanced armature drivers. 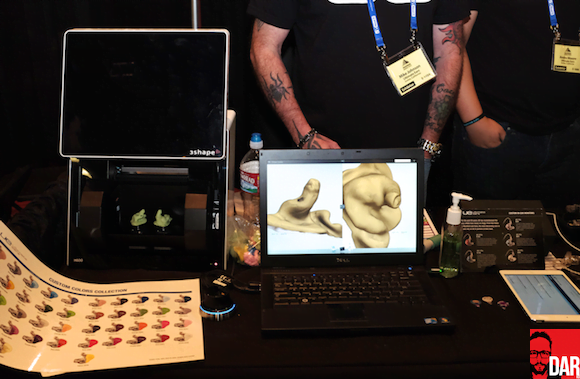 Obviously you don’t get the benefit of a custom fit but being able to audition the sonic signature of each model gives the listener a good idea of the end result’s starting point. Back and forth I went for twenty minutes before finally landing on the UE 7 Pro (US$850), a stage monitor! Which colour scheme would Sir prefer? Customers can add their own logo or configure each earshell’s colours independently. I went for “translucent + ruby red” on both.

The UE 7 Pro loads in three balanced armature drivers – low, mid and high – all handled by a two-way crossover. Sound fires into the ear via two holes (bores): the first spills the high- and mid-frequencies; the second is dedicated entirely to the lower end.

Before I can listen, the ear moulds are whisked off the UE factory for 3D-scanning, a non-operational example of which was on show at UE’s table. Dias explains how minor mould anomalies are smoothed out in the resulting software render before the shells are 3D-printed and the drivers carefully inserted and positioned.

Dias’ slow talk of a fast production process proved to be bullshit free. My pair of UE 7 Pro arrived down under inside a sturdy, padded carrycase a mere nine days after the audiologist had done her thing. Let me repeat that: nine days (and that’s to Australia!).

Bonus points go to Ultimate Ears for sending me a replacement cable after the original started intermittently dropping the left channel. The replacement wire took a mere four days to journey from Irvine to Sydney. Unclip the old and clip-in the new – easy. 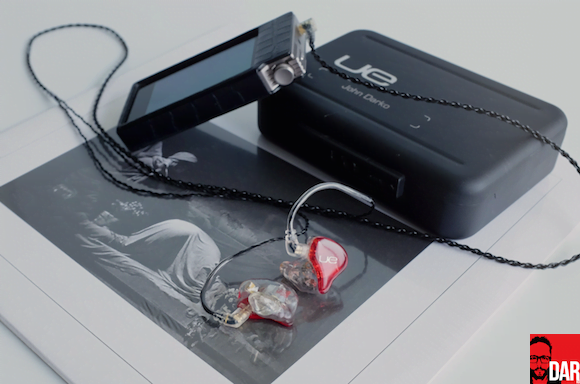 The Ultimate Ears IEMs are larger and slightly weightier than the less expensive German C-Ear X. The UE 7 Pro feel studier too, taking up more outer ear space without protruding. On comfort I’d give the clear nod to the Californians – a perfect fit from day one. The over-the-ear loop removes cable strain, itself light and seemingly free of microphony.

With a comfortable seal in the bag there’s no need to crank the volume quite so hard. The UE 7 Pro’s 124db sensitivity helps too. With the Astell&Kern AK120 II providing tunes, satisfactory listening levels were had at 25-30%, depending on the recording.

The UE 7 Pro vibe is down-to-the-bone detail, particularly with voices, and high all round illumination. Think a sports field under floodlights. The illusion that no surface texture or deep mix subtlety gets away unnoticed is played out to a tee. I could make a case for the UE 7 being the most revealing headphones I’ve heard to date, and that includes competition from full size cans, which, to their credit, give a better sense of music’s physicality. With three tiny drivers firing sound directly into one’s ear canal some comparative acoustic heft is lost.

The UE 7 Pro’s ability to isolate the chatter of TVs at the local gym is a sharp reminder of the number one context in which no full size headphone can compete. Here, the Ultimate Ears trounce the previously reviewed C-Ear at nearly every turn, most notably with frequency extension at both ends of the spectrum. The UE 7 Pro connote a far healthier dose of recording space information and are considerably more adept at nailing transient-led nuances. If there’s any absolute shortcoming its with bass propulsion. If you’ve a need for prominent bass, look elsewhere in the Ultimate Ears range. Or to another manufacturer.

It is important to note that the UE 7’s presentation is more intellectual than it is physical. Three words to assess their character: crisp, clean and incisive. These customs are a better match for the fatter, chunkier tonality of the Astell&Kern AK120 II than the similarly crisp/clean Sony NWZ-ZX1. 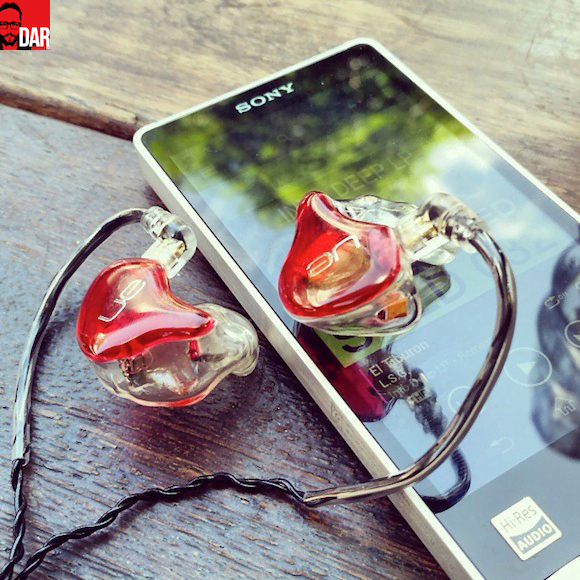 With the PonoPlayer they sound good sometimes and not others. This may or may not be attributable to the UE 7 Pro’s 17.5 Ohm nominal impedance being unsuited to the PonoPlayer’s output impedance, which designer Charlie Hansen says is below the 5 Ohms that caused the forum dweller pile-on. Hansen reckons the inconsistency with sound quality can be laid wholly at UE’s door.

Four months after first firing up the UE customs, I’m once again in-flight to the USA for CES. The passive noise isolation benefits of a custom fit come to the fore (as they did previously on the exercise bike). Much of the cabin rumble is dialed back after inserting each earshell – well before I punch in a hi-res rip of Peter Gabriel’s Passion. With drama and scale the UE 7 Pro deliver in spades. Most arrestingly, the illusory headstage locks into place just behind one’s eye sockets. Don’t be put off if that sounds too biological; it’s a most thrilling listening experience.

Custom IEMs like the UE 7 Pro are for those who find full-size, active noise cancelling units like the PSB M4U 2 (review here) physically too oppressive. If you want to max out your listening experience whilst exercising, something like the custom fit UE 7 Pro is a must.

Comparisons to other high-end offerings from the likes of UE originator Jerry Harvey or new kids on the block Nobel Audio will arrive in due course.

However, neither rival has (yet) nailed the thoroughness of the audition process or the speed of manufacturing quite like Ultimate Ears. A clear and present point of difference in the gotta-have-it-by-yesterday attitude of many a modern, Internet-researching consumer. 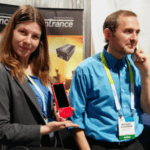 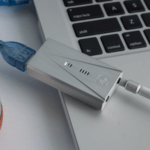