No doubt about it, the original Rega DAC was a big hit worldwide (review here). However, it arrived with a 16bit/44.1kHz-limited, adaptive USB implementation at a time when the competition was on the cusp of going hi-res-capable, asynchronous USB. That didn’t stop the Rega DAC selling like hot cakes – its more forgiving sound signature was its strongest suit.

Could it be that consumers look for more advanced features long before they ever have need for them? If enough publications tell readers that DSD (for example) is the future of digital audio, more and more consumers will begin seeking DSD capability out in their next DAC’s feature set, whether they have an extensive DSD library or not.

I suspect the same thing happened with the adaptive USB vs. asynchronous USB debate. Did we follow the dogma/PR or did we trust our ears? In the case of USB implementations, the former won out.

Coming to market this year is the Rega DAC-R. The circuit design apparently hasn’t changed all that much. Rega’s website claims an “enhanced version of the Rega designed circuit”.

Here’s more Rega website copy/paste: “All the capacitors associated with the analogue signal path are audio grade bypassed with MMK polyester capacitors, and low impedance conductive polymer capacitors are used for DAC decoupling. The power supply utilizes a toroidal transformer, fast rectifier diodes and again audio grade capacitors. There is a power supply for the control micro controller, separate from the digital & analogue audio stages. Special attention being paid to the inter IC control signals ensures the control data noise is kept to a minimum.”

Bryce Allan of The Sound Organisation – they handle Rega products in the USA – says it’s the implementation that’s been improved. Allan claims the DAC-R sounds better than its predecessor but stumbles when I press him on the specifics of ‘why?’. Perhaps we should think of the DAC-R as the same body with the same heart but different blood? As with everything, the proof will be in the listening.

Don’t go looking to the DAC-R’s back panel for differences either – there are none to be found. One is still greeted by 2 x coaxial inputs, 2 x toslink inputs and a single USB socket.

The new version’s decoding engine still runs on a pair Wolfson 8742 chips, filter options have been dialed back from six to three, there’s a remote control for source selection and – hallelujah for some – the USB input now pivots on an ‘isolated’ asynchronous XMOS chip capable of handling up to 24bit/192kHz. Rega have yet to kowtow to the DSD conversation.

It was a delight to finish my CES 2015 rounds with something so arrestingly simple. The Rega DAC-R will retails for US$1095 – a hundred more than the original model. 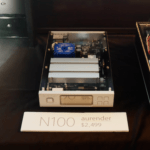 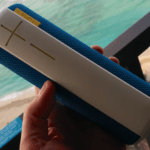