Do the jitterbug. AudioQuest’s new USB bizzo was so named by founder and chief designer Bill Low whilst the initial idea sprang from a conversation between Steve Silberman and Gordon Rankin. Rankin designed the circuit with Garth Powell adding his power supply nouse during the second phase of the JitterBug’s development. That’s a goodly number of people for a product that’s no bigger than your thumb.

So what the heck does AudioQuest’s JitterBug actually do?

Three things: 1) it’s a line conditioner for the USB voltage bus; 2) it’s a signal filter for the USB data bus. In both instances it suppresses the electrical noise that comes pouring out of your computer and messes with your DAC’s super-sensitive circuits; 3) When introducing a demo of the JitterBug’s capabilities AudioQuest’s Steve Silberman explained that “it also attenuates the entire signal to remove parasitic resonances”.

Putting it more simply, the JitterBug doesn’t re-clock the digital audio stream (as its name might suggest); it filters out USB nasties and lowers the amount of electrical noise travelling along your USB cable.

If that makes no sense to you, look at the JitterBug as AudioQuest’s answer to the Schiit Wyrd (US$99) or the iFi Purifier (US$99). AudioQuest’s JitterBug halves the entry fee to US$49.

The units used for this CES 2015 demo were all naked prototypes – the shell design is still to be finalised.

Hearing a single JitterBug in series with the USB cable, acoustic guitars sounded more natural with a shade less ‘pingy’ metallic glare on (some) transients. Things got a whole lot more ‘WTF?’ when a second JitterBug inserted into the adjacent unused USB port also brought a further lift in depth perception. It would seem that even plugging unused ports makes a difference. (That alone is enough to set forums alight).

The demo wrapped with a slice of Aimee Man, first with the system loaded with three or four JitterBugs – including one in the front-facing empty port of the digital pre-amplifier – and then with all JitterBugs removed. The difference was palpable: soundstaging lost some height and width whilst inner spatial information surrendered some clarity.

I’m not suggesting for a moment that you go all out and buy five or six of these things to plug every single USB port found in your audio system although it’s likely that more fanatical listeners probably will – audiophiles do love affordable system tweaks. I’m suggesting you first give a single JitterBug a try between your PC and DAC. Perhaps it will remove some of the digital glare from the sound? It might even remove the need for a fancy USB cable? That’s a potentially troubling thought for some cable manufacturers, even AudioQuest themselves! That’s for you to find out, people.

At its fifty buck asking price you can try the JitterBug for yourself without too much financial injury.

UPDATE May 2015: A follow-up piece on the JitterBug can be found here. 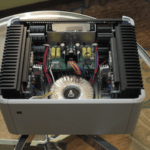 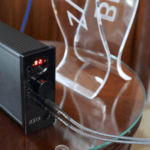