Audio playback from a digital source is similar to telling a joke: timing is critical.

Consider an average digital audio setup: the computer sends an audio file as a digital binary stream along a USB cable to a DAC that then converts that signal from digital to analogue.

The mental abstraction of ones and zeroes can help. Each bit (one or zero) must arrive at precisely the right time at the D/A converter for it to conduct a ‘perfect’ decode to analogue. If a bit arrives early or late, we get jitter. And in sufficient quantities jitter is audible. With more extreme cases of jitter we might hear momentary clicks or warbles.

(Side note: the frequency distribution of jitter gives us a more complete picture; does jitter occur more in the lower frequencies than the higher frequencies? Or vice versa? Or is it spread randomly across the frequency spectrum?)

But wait – it’s not ones and zeroes that travel down a USB cable but a series of varying voltages that represent those ones and zeroes. If the voltage tips beyond a prescribed level, the DAC receiver chip sees a one. If the voltage falls below another prescribe level, the DAC sees a zero. To ensure proper visibility to the DAC, each voltage is held in place for short time before moving to the next. It’s what we call a square wave.

If we need a one followed by a zero, the post-hold transition isn’t instantaneous. The voltage takes a vanishingly short amount of time to transition from one level to the other. If the time taken is either too short or too long we get a timing error: jitter.

This is why the notion of ones and zeroes is only an abstraction. In reality, there is no discrete digital signal streaming along our USB cable. It’s a continuous analogue representation of that digital signal; and it is therefore subject to the disturbances that affect any other analogue signal e.g. EMI/RFI.

This digital-as-analogue transmission method is (probably) why some USB cables sound different to others; naysayers who would explain away these differences as an impossibility because it’s “just ones and zeroes” now find themselves on theoretically shaky ground.

Turning up the tremor magnitude is lack of direct experience: have our naysayers actually heard the USB cables in question or do they opine purely on the basis of their rigidly held, theoretical preconceptions?

Nearly every audiophile starts out this way. “Speaker cables? Make a difference to the sound? Puh! Pull the other one, Giles!” The cable cherry is usually popped when our cable refusenik swaps out loudspeaker cables and/or interconnects for the first time. Disbelief is swiftly replaced by WTF, which later morphs into questions of why. Being analogue cables, the applied mathematics of capacitance, inductance and resistance is reasonably easy to intuit even if it’s not fully understood to the letter.

And yet such mathematics is just as relevant to our ‘digital’ cables whose signals also operate in the analogue domain.

A full understanding of the whys and hows isn’t yet mine but mentally reframing digital cables for what they really are – transmitters of analogue signals – helps us better align theory with reality. Once the notion that digital is simply a matter of ones and zeroes is dispensed with, we have a slightly different outlook on the digital audio transmission world. 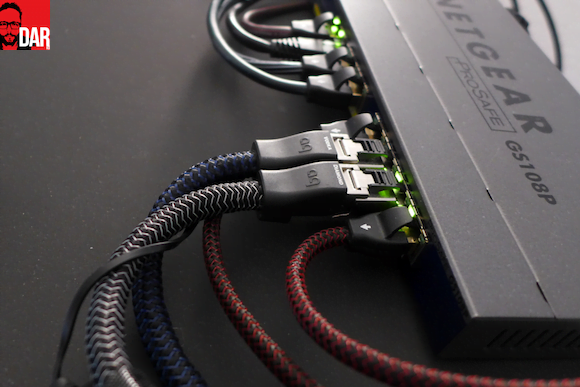 Then comes the argument that the DAC will resolve all data arrival-timing errors by first buffering them and then re-clocking them before sending them onto the decoder chip. That’s a nice idea in theory but experience tells us otherwise. Why does an Antipodes DXe sound different to a MacMini when feeding, say, an AURALiC Vega? Same DAC, same USB cable but different results entirely. And changing the USB cable brings yet further changes to the resulting sound quality.

These empirical results fly in the face of the idea that the DAC will smooth away jitter with its buffer and re-clocking. Those who hear these results first hand and drop real cash in accordance with their findings can’t all be imagining things – they can’t ALL be crazy! Clearly something else is going on.

I have questions. Do USB cables act as aerials? Do they introduce different levels of EMI/RFI into the DAC? Does this electrical noise disturb the DAC’s internal clocks? Clearly, these are questions for an engineer to answer. And if our engineer is unable to explain a sonic delta, we’re either asking the wrong question, the wrong engineer or both.

History tells us that hearing and accepting that differences between cables do exist comes first. The collective understanding of why often arrives later.

I don’t want to get hung up on USB cables – acceptance of difference is already on its way to permanence in the audiophile lexicon. It wasn’t always this way. Even as late as 2010 hostility towards ‘audiophile’ USB cables was strong.

In 2014, the new frontier of acceptance is Ethernet cables; an area of digital audio transmission where scepticism remains rife.

In the appropriately numbered KIH #13, Srajan Ebaen tackled the issue from the side. “Are you keeping an open mind or being taken for a fool?” he asked. Many an audiophile sceptic would have us believe that plonking down anything more than Monoprice money on an Ethernet cable is to be had by snake oil charmers. Maybe they’re right, maybe they’re not. Without actual listening no opinion, no matter how forthrightly expressed, can be considered definitive.

Besides, this Blue Jeans Cable editorial reminds us that many a CAT 6 cable doesn’t even meet the standard’s specifications.

Have we not been here before with USB wire?

It is my intention to tackle the Ethernet cabling issue head on. Does swapping to a different model change sound quality?

Last week I asked via DAR’s Instagram, Twitter and Facebook channels the following: “Can swapping out something as seemingly benign as an #Ethernet cable change the sound of a system?” 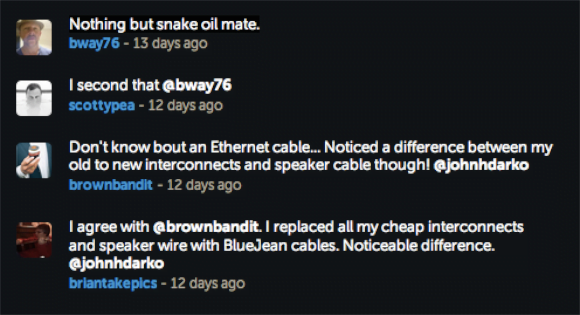 It seems our respondents are happy with the idea that interconnects and speaker cables can make a difference but Ethernet, it’s “Nothing but snake oil, mate”.

Proclamations of snake oil were also present in the ensuing Facebook conversation:

Ralph’s comment tries to make leverage from the idea that a buffer will ultimately sort out any timing errors as long as it receives all the data. 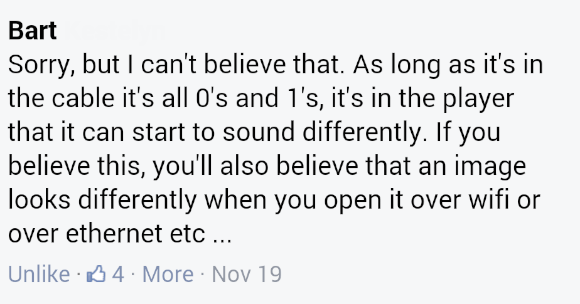 Hard to blame people who maintain guard against claims that Ethernet cables can make a difference to sound. It’s when minds remain steadfastly locked shot that broader acceptance of an idea – should it have some validity – comes to a halt.

Pete sounds similarly sceptical but there’s an open mindedness to his tone: 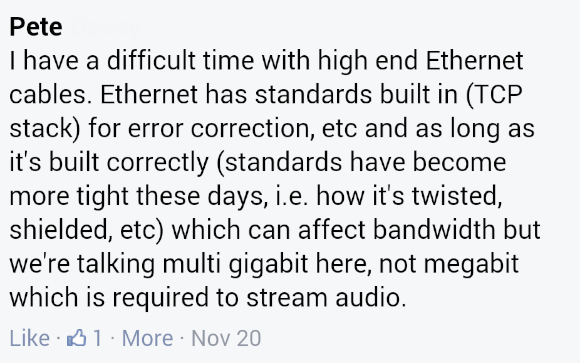 Malachi is an occasional contributor to this site. His social media style can sometimes be seen as combative. No change here, even though he comes in swinging for Team Difference:

Before wrapping Part 1 (of 3 articles) on this subject know that I’ve heard Ethernet cables make a positive difference to sound quality at two separate AudioQuest demos on two separate continents this year alone. I’ll detail those in Part 2 with home listening results to follow in Part 3.

However, the final word goes to Chris who drops a modicum of engineering reasoning into the argument:

Food for thought. Thank you, Chris. 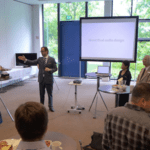 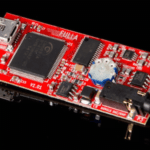