Said the audiophile to the hi-fi world, “We should break up. It’s not working. It’s not you, it’s me. I let you eat into my living space, my budget, my time. Enough is enough.”  Welcome to the obsessive-compulsive world of audiophillia where myriad possibilities often lead to choice paralysis and an attendant lack of satisfaction.

The passive LS50 standmount might be KEF’s most popular loudspeaker of their fifty-year career but choosing a suitable amplifier requires forethought, research and audition time. This is where your local dealer comes in handy.

Got amp? Good. Then there’s the matching DAC to consider. After which, you’ll need to choose a speaker cable. And interconnects. For newcomers this might just be too overwhelming.

More seasoned audiophiles, plagued by their own internal machinations will see audiophile nervosa eventually arrive. The desire to tweak in the name of optimisation jams open the door for the tyranny of choice to take up co-habitation.

KEF’s X300A powered loudspeakers now come in a Wireless version that load a US$200 premium onto the original’s US$799 price for a final RRP of US$999. In Australia the X300A Wireless come with an RRP of AU$1399.

Stump up the extra cashola for the new model’s network connectivity and you get the option of a white finish (which I think looks terrific). Otherwise it’s the original’s more subdued gun-metal grey.

I reviewed KEF’s original X300A in June of last year so consider this piece more of a follow-up than a review in its own right.

Spending time with the newer, network-connected ‘Wireless’ version has cemented previous assertions that these actives aren’t 1) as warm as the LS50 – which really dig serious Class D horsepower from a pair of Wyred4Sound mAMPs – and 2) do things with layer separation that I’ve yet to hear from the LS50 with any amplifier/DAC combo. The LS50 might be the better speaker but the X300A’s sound is cooler, more down-the-line neutral than most LS50-centred configurations I’ve heard.

Perhaps that sense of neutrality can be attributed to the X300A’s Uni-Q coaxial driver array being juiced via a super-short signal path by a bespoke pair of Class A/B amplifiers? This is no master-slave active configuration. Each 7.5kg loudspeaker houses amplifiers and DAC with inter-speaker communication taking place digitally via USB. 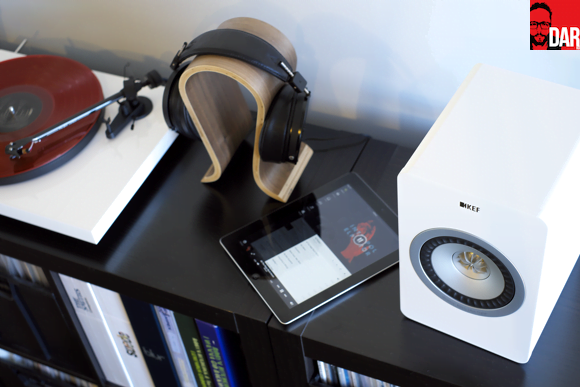 This brings us to my first niggle: the supplied USB cables are only 2 metres in length. Users looking to remedy this shortcoming should seek out a cable with a mini-USB termination. Statesiders should look no further than the KEF Direct website which sells the WireWorld Ultraviolet 7 USB cable. US$99 gets you 5 metres that’ll accommodate greater distance between speakers as well as (hopefully) a slight uptick in sound quality. That’s only one of two areas where I can foresee the upgrade itch being scratched. The other is power cables. I netted a smoother, more relaxed sound when switching out the stock IEC cords for a pair of LessLoss DFPC original, but in the process almost doubling the financial outlay. Those looking towards more sensible price points for power cables are directed to Kentucky’s Morrow Cables – I reviewed their entry-level MAP-1 wire here.

Both left and right loudspeaker execute their own individual D/A conversion (PCM up to 24bit/96kHz and no DSD), prior to which KEF’s custom digital signal processing (DSP) is applied to optimise driver phase- and time-alignment. That’s something you can’t do (as easily) with a passive speaker, amplifier and DAC combo. This is no doubt why the sound of the X300A threaten to vanquish all similarly priced system challengers built around passive designs.

The DSP trickery doesn’t end there. KEF’s software engineers have pre-configured the X300A – both original and Wireless – with two EQ settings, switchable on the rear of the left speaker: ‘DESK’ for near-field use and ‘STAND’ for when there’s greater distance between speaker plane and listening position. I sat mine on IKEA Expedit shelving chock full of vinyl and listened with the ‘STAND’ setting engaged. 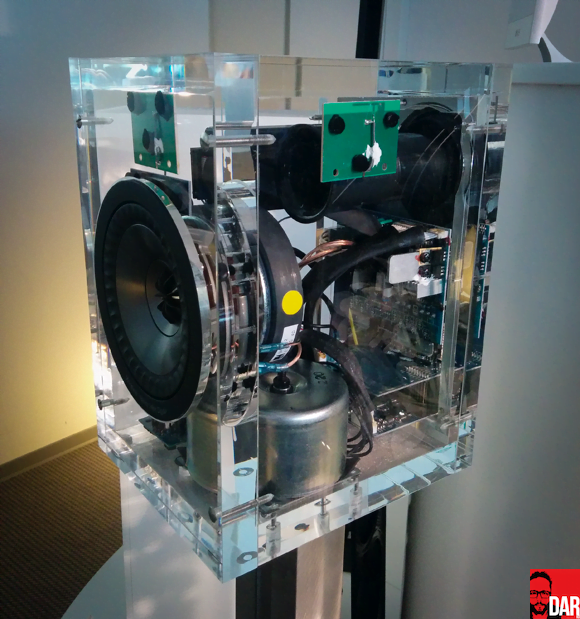 You’ll need a heavy desk to properly accommodate the X300A. That or spend an additional hundred bucks on some half-decent desktop speaker stands. On a lightweight IKEA desk the isolating desktop stands from IsoAcoustics returned a large dollop of low-end control and its associated rhythmic energy, both previously lost through the desk’s structure.

Relocated to the open space of a lounge room and placed on Atacama Nexus 6 speaker stands, the KEFs really show what they’re capable of. With greater clearance from the rear wall and dispensing with the supplied port bungs, I noted increased soundstage height and depth and the all-important layer separation alluded to earlier presented more obviously . There’s enough low-end heft on offer to drive spaces larger than my own ‘average’ Sydney apartment loungeroom.

Reprising the concluding remarks of my original X300A coverage, this system-in-a-box will likely best any thousand-dollar combination of passive standmounts, amplifier and DAC. And that’s before we even begin to factor in money for speaker cables and interconnects, before we consider the DSP that optimises driver performance and before we talk about the wireless streaming of this new version.

You can still run this ‘Wireless’ edition of the X300A USB-direct should you so wish but unleashing its wireless potential means one less cable to get up and running with music, thus freeing up more speaker position possibilities. Cabling considerations are trimmed back to a mains power feed to each box and a USB cable to connect ‘em together. Music now arrives over the air, which brings us to the main difference between this newer model and its less expensive predecessor: wired or wireless network connectivity.

Wiring these actives into your network is as simple as plugging a network cable into the RJ45 socket and then holding in the reset button on the left speaker for a few seconds.

To lasso the X300A wirelessly into your home network takes a little more technical effort. Either KEF’s ‘online’ setup wizard or their Android/iOS ‘Setup’ app will walk the user by the hand through a simple process that culminates in entering Wi-Fi login details and waiting for the speaker’s network daemon to restart. Support for the 802.11b/g arrives out of the box but 802.11n compatibility is MIA. Something for a future, over-the-air firmware update perhaps?

Whether you go wired or wireless look for the blue LED to stop flashing as a sign of IP address assignation. Once it’s a solid blue you’re good to go with Apple’s Airplay protocol or DLNA. 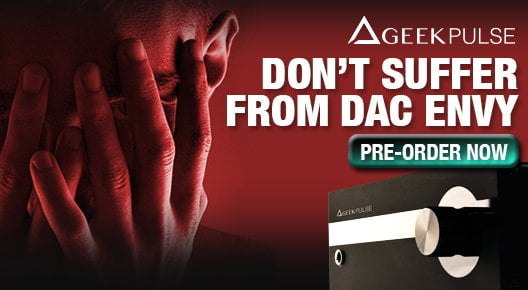 Airplay support on Android devices is more miss than hit. Partially plugging that hole, KEF provides the ‘DMC’ app – a free download from the Google Play store – that enables DLNA streaming of songs stored on the Android device itself. Similarly, the Sony NWZ-ZX1’s Wi-Fi capabilities means you can ‘throw’ locally stored files to the KEF from within the Sony’s default music player app.

It’s much easier to hand-off Spotify and Tidal music streams to the KEFs with a device that has Airplay support baked in at the operating system level: Macbook, iPad, or iPhone. I used a 5th generation iPod Touch to sling album after album from Spotify to the KEFs and they rarely missed a beat.

I emphasise rarely because the KEFs would occasionally drop the wireless connection to the network causing me to run though the setup app again. That’s a little annoying but I can’t confidently lay blame at KEF’s door; the instability could just as easily be a quirk of my fairly basic home network. With the X300A Wireless placed within easy reach of my router I thereafter opted for a hard-wired LAN connection from which the KEFs never dropped the connection. No glitches, nothing.

Curiously, the wired connection’s musical presentation had me doing a double take on its slightly improved midrange clarity over and above Wi-Fi; less background hash (I think).

A couple of audible clicks can be heard from the speakers’ internals each time they awake from standby. That’s the same for wireless, wired, USB-direct and the analogue input.

In my review of the original X300A I imagined these actives’ deployment with a Project Debut Carbon turntable. With the networkable successors, I turned that imagining into reality, teaming up the very same Pro-ject ‘table with a Schiit Mani phono stage for a vinyl playback system whose total cost remains well south of $2K. And by golly it rocks.

The left speaker immediately digitises the analogue input so that a signal can be dispatched to the right speaker before DSP is applied and the signal converted back to the analogue domain. You might think this would somehow homogenize analogue sources and, in this case, neuter some of vinyl playback’s plus points -but it doesn’t. No wonder the Pro-ject Debut Carbon is the entry-level table to beat at US$500. Compared to even lossless streams from Tidal, acoustic mass was meatier and tonal colours denser; not an outcome that I expected at all. 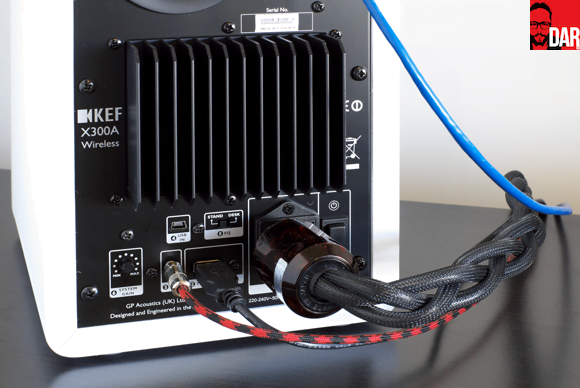 However, away from the digital volume control of computer and/or iPad playback with which I ran the KEF speakers themselves at 60% tilt, we bump into some operational quirks that give way to two more, very minor niggles.

Firstly, with no volume control on the Schiit phono pre-amplifier we are obliged to attenuate using the rotary found on the rear of the left speaker. This nipple-pot is fiddly and easy to over-steer.

Secondly, for its analogue input I’d love to see KEF ditch the 3.5mm input socket in favour of a pair of RCAs. Finding a suitably terminated cable isn’t particularly hard – I used an AudioQuest Golden Gate interconnect – but an RCA-to-RCA connection is closer to industry standard.

With KEF adding network connectivity to this already DAR-KO awarded system-in-a-box, the X300A Wireless is just as compelling a proposition as its predecessor. The X300A in both verions remains at the top of my list of system recommendations to newcomers.

You’d struggle to better its performance with separates and if you could, you’d have a hard time doing so. Best of all, the KEF X300A Wireless is (almost) completely non-upgradeable. It’s a set it and forget it system and it’s not for tweakers. The X300A Wireless will make you want to quit the merry-go-round of upgrades and just play more music.

And in the context of my recent editorial on the need for audio shows to exhibit properly affordable gear, how about a KEF room that features nothing but a pair of their X300A Wireless sat on stands, streaming Redbook quality audio from the room host’s iPhone Tidal app? US$999 to walk away with everything needed to start – or end – an audiophile journey.

One final thought: Americans should pay even stricter attention here. At time of publication KEF America were selling the standard X300A for US$599 and the Wireless version for US$799. Stone cold bargains both.