Being a New York local Jack Wu has brought everything – including the kitchen sink – across the East River and into Brooklyn. His room is a U-bend of benched headphone gear with at least five or six listening stations. I try to ignore the $16k flagship monoblocks and make a beeline for one of my favourite entry-level headphone amplifiers, the WA6. I much prefer its sound to the more dapper WA7 Fireflies.

However, this WA6 comes with a side dish. It’s the SE edition (US$1200) with separate tubed power supply. This outboard motor lifts output power from 400mW to 1500mW – a giant leap – and the Doors’ “L.A. Woman” positively grooves behind a pair of Sennheiser HD700.

For almost two years now Wu has been working on bringing this WA6 sound to the portable market. Not an easy undertaking when your stock-in-trade is fragile glass canisters filled with gas. Then there are power constraints to overcome as well as getting the damn thing into a small enough chassis that people will want to take it places.

In a glass display case sits the first prototype of this portable endeavour – the WA8. The 3D printed case is only there to hold the thing together and Wu anticipates he’ll have it housed in a metal chassis by the time he hits RMAF in two weeks; the production version will be aluminium. Wu is also at pains to call it a ‘travel’ amplifier.

Inside, custom output transformers that are “very different to the competition”, according to our host. All tube gain staging is indeed unique. The user can switch up from two to three of the military pencil tubes for harder-to-drive headphones. “It’ll drive pretty much anything except the Abyss”, continues Wu.

Power comes from a 12V DC brick which is also used to recharge the internal battery pack.

The inbuilt DAC is the same found in the WA7 – a TI 5102A – and the digital input is a mini-B USB via which I confirmed digital playback compatibility with a Samsung Galaxy S5 smartphone. For those already packing their own digital decoding the 3.5mm analogue input will suffice.

The price of the WA8 is expected to come in somewhere around US$1500 when it goes into production. No doubt we’ll hear more about it before then. 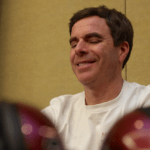