The way I see it, the guys at AudioQuest don’t just connect hardware, they connect people.

At the recent New York Audio Show in Brooklyn, AudioQuest cabling could be found in their main room (obvs) – a high-end rig sourced from Audio Connection, a dealer from Verona, NJ. Their wire could also be found joining the dots in rooms from KEF America and VPI Industries, both of whom are also headquartered in New Jersey. Completing our Garden State triangle is AudioQuest’s VP of Communications Stephen Mejias. He lives in Jersey City.

The reciprocity continues on VPI Industries’ home turf in Holmdel. Father and son Harry and Mat Weisfeld are slowly converting their former family home into a demonstration space that will ultimately serve as both dealer training space and customer audition venue. Want to hear a range of VPI turntables and chat with a Weisfeld? This is where you come. It’s quieter and more homely than VPI’s Cliffwood factory whose sole listening room hosts a pair of thunderous JBL Everest (US$90K) driven by a Cayin power amplifier.

In completing each of the four Holmdel-housed systems, the Weisfelds are keeping it local. They’ve teamed up with legendary British loudspeaker manufacturer KEF. A partnership makes that makes perfect sense once you learn KEF America is headquartered just eight miles down the road in Marlboro.

“VPI make beautiful-sounding turntables and we’re lucky to have their office less than 10 minutes away from our – it must be fate! Proximity like that makes is easy for to provide them with a variety of our high end loudspeakers and subwoofers for their experience-house”, says KEF ‘Marketing Samurai’ Stephanie Scola.

Mirroring the arrangements witnessed at the New York Audio Show a week earlier, AudioQuest have stepped in with cabling to join the dots.

Stepehn Mejias says AudioQuest’s relationship with VPI and KEF is based on “good friendship and good sound”. VP Joe Harley owns a VPI Classic and has enjoyed a long friendship with Harry Weisfeld. CEO Bill Low owns a pair of LS50, as does Mejias who also owns a VPI HW16.5 record cleaning machine and reviewed the VPI Traveler turntable when he worked for Stereophile. A pair of LS50 graces the AudioQuest sound room in Irvine, CA. 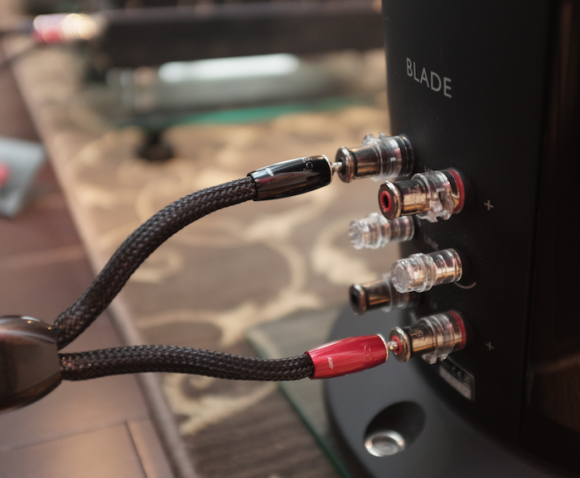 With connections between these three manufacturers running so deep, it’s no surprise that Matt Hegt, AudioQuest’s regional sales manager for the North East was charged with wiring the VPI house.

At the tail end of this reviewer’s New York Audio Show comedown both Weisfeld’s take me ‘round these new demo spaces. We drink coffee and chat whilst spinning records. In the process I turn Harry Weisfeld onto Richard Thompson. “I’m tapping my foot!”, he exclaims, genuinely surprised that “good music didn’t end in 1968”. Thompson’s Live from Austin TX 2LP bridges the oft-mutually exclusive worlds of regular and audiophile music.

Each demo room offers an inviting listening experience – it’s like being at home because it IS a home. Rows of vinyl and room treatments line the walls. This isn’t a contrived Maxell advert audition experience either. The Weisfeld’s know that listening to music can be both social gathering and solitary pursuit – more than one chair can be found in every room for which each compiled system sees a VPI turntable handle the input and KEF’s Uni-Q driver array work the output. 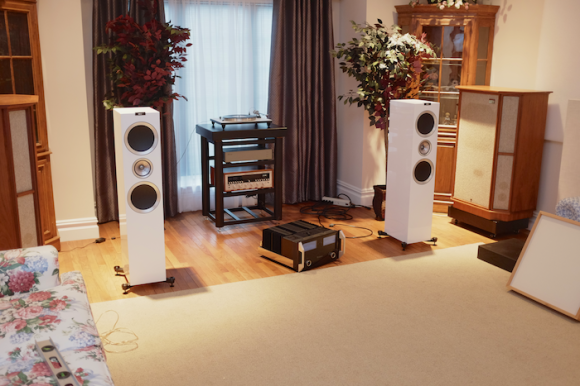 Room One is located to the left as soon as you set foot through the front door; Mat Weisfeld describes what’s on show as “a gateway to the high end”. At the very top of the playback chain sits the VPI Traveler (US$1500) – a fixed table with no upgrade path that will soon be replaced here by the identically priced, upgradeable Junior. This room will also host VPI’s 299D/Inspiration integrated tube amplifier (US$4000) launched a week earlier at the New York Audio Show. Loudspeakers deployed are KEF’s R900 (US$5000) in white.

A similar trio of brands struts its stuff in Room Two. On the side-wall rack are several ‘tables with which to play contrast-and-compare: the VPI Scout (US$2000), the all-new Prime (US$3800) and the Classic 3 (US$6000). A McIntosh MC303 (US$11000) handles amplification duties, chosen here for a specific reason: an ability to drive a three-channel KEF LS50 configuration (US$750 each). Here Weisfeld Snr. enthuses about the benefits of an additional centre speaker. “Your mind isn’t filling in the blanks so you can just relax into the music”, he says. 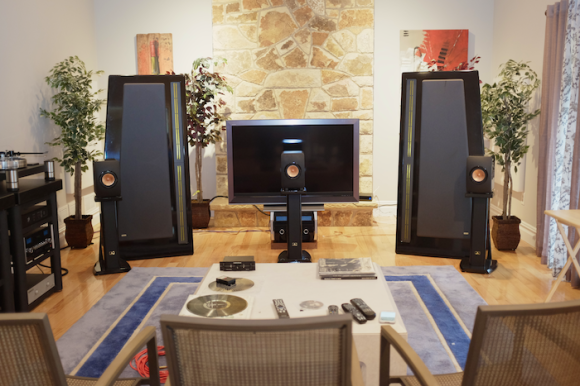 And yet we rarely see three-channel setups out in the wild or at shows. An observation for which I soon stand corrected. Harry Weisfeld informs me that VPI went with a three-channel demo system at the New York Audio Show in both 2012 and 2013. “This year was the first time we kept it strictly stereo!”, says Weisfeld who then goes on to explain that the third channel smooths out peaks and troughs, something first figured out by Paul Klipsch in 1957.

The unusual-looking loudspeakers that loom ominously behind the KEF trio are the handiwork of Bob Carver (US$400 from eBay!). They feature a ribbon (built by the man himself) and four Sony 10” drivers. A R400b subwoofer must be added to the LS50 mix if the KEF configuration is to to go as low as the Carvers.

The third room is the late Sheila Weisfeld’s old office – the former nerve centre of VPI – in which a stacked pair of Brookly-made Ohm F loudspeakers flank a table containing the most affordable system in the house: the VPI Nomad’s (US$999, reviewed here) 3.5mm headphone output socket is wired directly into the analogue input located on the back of a pair of KEF X300A (US$799, reviewed here). With the price soon to drop even lower in the USA on these active loudspeakers, the value proposition (and ease of use) demonstrated here is unassailable.

Weisfeld Jnr. was surprised to learn that the left-hand X300A digitizes the analogue input so that the signal can be passed to the right speaker over USB.

This brings us to the full monty in Room 4. Brace yourself for some BIG numbers. From the top: a VPI Classic Direct (US$30K) with Lyra Atlas cartridge (US$10K), VAS step-up transformer (US$600) after which it’s an all tube affair: McIntosh MC2500 phono pre-amplifier (US$7K) feed a pair of VAS EL34 monoblocks (US$4500ish) about which Weisfeld Snr says, “China can make good shit if you pay for it!”. Big transformers means a meaty 60wpc to drive a pair of KEF Blade (US30K). As per previous rooms, all wire comes from the house of AudioQuest. 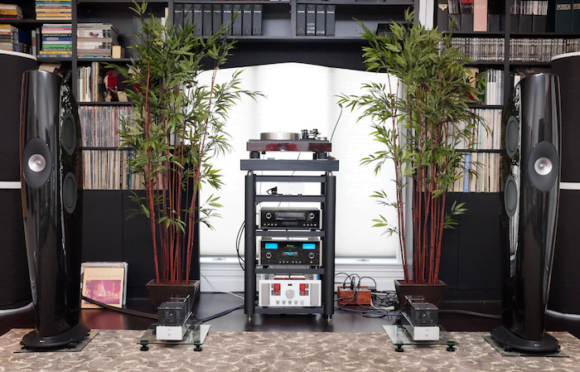 The sound in this room is seamless across the rear wall. Weisfeld comments on how the KEF Blade can do things that his beloved JBL Everest can’t…and for a third of the price. The Blades make good on the tired cliché of disappearing. Voices are reproduced with immaculate cleanliness. This is very much NOT the richer, more coloured sound that Daddy Weisfeld reportedly grew up with.

After more coffee and more Richard Thompson the conversation returns to three-channel. I joke about getting a third Blade to complete the picture. Our hosts seize the opportunity to demonstrate first hand how terrific this would sound a fetches a single KEF LS50 and third VAS monoblock from the other room. Dropped into the mix, Ella Fitzgerald’s “Black Coffee” displays less sibilance than the stereo rendition. The additional LS50 also takes the listener a few rows closer to the imaginary stage. My mind? Blown.

Serving as an alternative to the traditional storefront the VPI house of fun points the way for manufacturers to collaborate on something that’s greater than the sum of their parts. In effect AudioQuest, VPI and KEF America have curated their own permanent, four-room audio show. These three players are doing it different and that alone is a reason to get excited.

The Weisfelds plan to give their freshly configured home a proper launch later this year with an industry listening event slated for November. 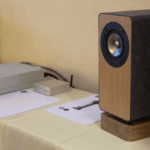 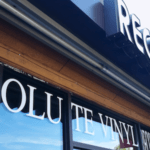