‘AAAV it. Australian Audio and AV Show. Quite the mouthful, so let’s AAAV it. Another Chester Group affair, it’s this reviewer’s third show in almost as many weeks.

For 2014 Roy Bird and co. bucked the trend of alternating with Sydney and kept their event tight to the Intercontinental Rialto in downtown Melbourne. It’s easy to see why. With the lobby extending out to the rear wall and up to the seventh (?) floor ceiling, this is possibly one of the finest audio show venues in the world.

The number of exhibitor spaces is down on last year’s event – a shame but not atypical of the ebb and flow of the Australian hi-fi scene where high land and labour costs meet with a relatively small population.

I’d imagine that many Australian audiophiles look longingly to the USA where a vastly larger population supports numerous regional audio shows. The tyranny of distance means hopping over to Los Angeles – a 12-hour flight from Sydney – for a long weekend is only for the most committed of listeners.

With approximately 23 million people inhabiting this vast continent and interest in good sound slowing shrinking into a niche pursuit (the world over), margins down under are tight(er). Many businesses run on fumes. Distributors and manufacturers must choose wisely where to put their promotional dollars and it’s often the case that the annual hi-fi show is the first casualty when belts need tightening.

To circumvent show burn-out, my assignment for AAAV 2014 was digital audio (duh) and the entry-level. Having seen so very little affordable gear at both the New York Audio Show and the Rocky Mountain Audio Festival, I am beginning to think that the hifi world is falling on its sword in slow motion. The high-end is alive and well – that much is obvious – but what about those looking to sell high value propositions to the entry-level?

Having communicated these past few years via phone and email this year’s AAAV show is my first in-person encounter with life- and business-partners Ian Robinson and Lindy Gerber. What an amiable and down to earth couple! No wonder they’ve managed to stay in business so long.

This weekend sees them officially marking REDGUM’s 21st birthday with the first showing of their Black Series RGi120ENR which I learn is now in production. In China.

That won’t be news to those following the REDGUM story but for those of you playing catch-up, this once fiercely patriotic company has found a way to shave not just skin but actual hunks of flesh from their amplifiers’ sticker pricing by having them made in the same country as nearly every other entry-level manufacturer.

Robinson confesses to not speaking any Mandarin and his factory workers speak very little English so it was necessary for him to oversee production by first leading a game of monkey-see-monkey-do. 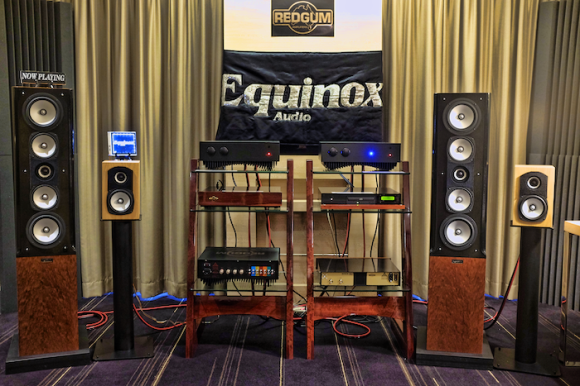 The huge heatsink included on all Black Series models might be overkill for the more junior RGi35ENR and RGi60ENR but it’s absolutely necessary for the RGi120ENR that runs with four dual-die MOSFETs per channel that ultimately net 175 wpc into 8 Ohms and 500 wpc into 2 Ohms. Strewth!

In their room at the Rialto, Gerber and Robinson demonstrated their wares with Equinox Loudspeakers’ Neptunes (AU$8600) for a sound that was as large as it was effortless; no doubt the direct result of the RGi120ENR’s serious power reserves. If you’re a stickler for soundstage size then REDGUM amplifiers are worth a long look.

With the two AU$1800 early-bird units already snapped up via this Black Series’ Indiegogo ‘Booster’ campaign, your next cheapest crowd-fund price is AU$1900. However, if you simply insist on an Australian-made, wood-fronted RGi120ENR for AU$3850 then team REDGUM won’t stand in your way.

Looking to play Goldilocks? Gerber tells me that the Black Series RGi60ENR is coming very soon. 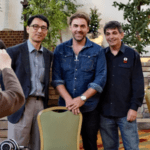 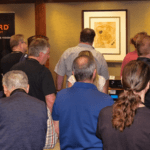