Entry-levelling. At the New York Audio Show last month I joined Art Dudley and Steve Guttenberg on a panel hosted by PTA’s Scot Hull. The topic under discussion was the 21st Century Audiophile.

Moderately well attended, the mostly lively discussion skirted all manner of topics (including Pono) but the overriding theme was the need to expose the 99% of the world who aren’t audiophiles to entry-level systems. And we weren’t talking about $1000 systems.

Like it or not, many, many people scoff at dropping $500 on a hi-fi. Guttenberg drew our attention to loudspeakers from Dayton Audio and a Tripath amplifier from Lepai that gets you up and running with good sound for under $100. I’ll say that again: $100 for an entry-level hifi system. Demo-ing systems like this is step number one in getting young’uns to shows.

Hosted in the heart of Brooklyn, was this not a prime opportunity for the Chester Group to invite a local micro-brewery, a local coffee shop, Rough Trade records, Academy Records, band t-shirt sellers and anyone else who might help evolve the audio show into a festival of the senses? Coffee, alcohol, music and hi-fi gear – they are all connected.

Show organisers tend to make a loud noise about attracting the kids to shows but the end results are mixed. RMAF’s CanJam remains shot through with youth on both sides of the fence that separates manufacturer and attendee. However, in the more traditional two-channel demo rooms upstairs the demographic holds tight to the cliché of balding, portly middle-aged men; an uncomfortable truth that must be accepted before being tackled head-on.

One company driving down the cost of entry to good sound is Scott McGowan of PS Audio. He’s decked out a small listening space to approximate a New York studio apartment. Along the bench sits a system built around McGowan’s Kickstarted Sprout integrated amplifier, soon to hit dealer networks at US$799.

The Sprout is vinyl friendly – a Project Debut Carbon (US$350) played into its MM phono input. Bluetooth streaming makes it kid and spouse friendly. Reel to reels tapes occasionally ran the line-level input. And despite a humble 33 wpc output (into 8 Ohms) the Sprout made a solid fist of Golden Ear’s Aon 3 standmounts (US$999/pr). That said, a remote control and toslink input would be top of my feature request list for Sprout 2.

Extrapolating this scene to Best Buy and Amazon, computer audiophiles could mate the PS Audio Sprout with the Andrew Jones’ designed Pioneer BS-22-LR standmounts and walk away with change from a grand. 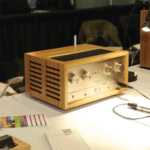 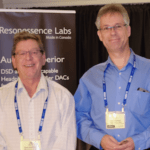