Free yo mind and yo ass will follow. So the theory goes: generate interest in your brand in the budget sector and consumers are more likely to transfer brand loyalty to higher price points as the years progress and income allows.

Case in point: you might think of AudioQuest’s Dragonfly as an excellent entry-level DAC and headphone amplifier – and you’d be right. But it’s more than that. It’s a branding exercise; a way to bring the AudioQuest brand name to a younger audience. As a result of its runaway success, this cable manufacturer is no longer seen as just that. Not only are they keen proponents of computer audio, Head-fiers know who they are. A smart move by Bill Low.

Similarly, it would appear Naim Audio’s 2011 merger with Focal has injected some fresh thinking into the former’s product line. Not only do we have the high end of high end amplifiers in their Statement solution (covered here) but Naim have commenced tickling the entry-level with a more lifestyle-centric product: the Mu-so soundbar. Note their spin doctors dodge the ‘S’ word by calling it a ‘Wireless Music System’.

I first caught the Naim Mu-so (US$1495) at its launch at the Munich High-End Show in May but in failing to snap a decent picture it didn’t make it to my show report. This year’s RMAF provides a chance to make amends. Located in the foyer of the Denver Tech Centre’s Marriott hotel, Naim’s booth was both the first and last I visited: Friday for photos, Sunday for specifics.

The Mu-so soundbar is a fresh take from a British hi-fi manufacturer with a proud heritage on a product that often sees quite the kicking in some quarters. 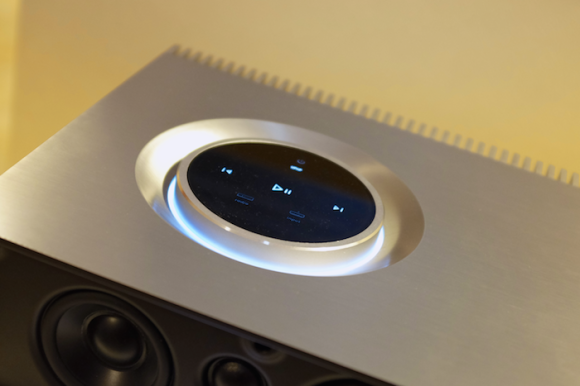 Connectivity options here are off the dial: aptX Bluetooth, Airplay, UPnP, USB and Spotify Connect. Naim have also been smart enough to add an optical input which nowadays seems to be the standard for consumer-grade digital audio. Hands on control comes via the gotta-touch-it rotary or iOS/Android apps. A DSP-d crossover hands off the signal to the 75w Class D amplifiers, one for each of the Mu-so’s six custom drivers.

1) The style conscious newcomer for whom a long, utilitarian black soundbar just won’t do. The Mu-so’s anodized aluminium casework is striking and its front grille customisable with one of three different colours (available separately). Black comes as standard.

2) It’s for Naim die-hards who won’t buy any other brand and need a playback solution for the bedroom or office.

Now let’s get real: the Mu-so soundbar is unlikely to outperform similarly priced two-channel setups, to complain about that is to miss the point. Pinkfishers won’t live forever. The Mu-so is intended to expose the Naim name to a new, younger audience and (hopefully) to other Naim products. It’s partly a game of offering a product that’s future-facing and partly a game of brand awareness.

Were he alive today, I’m not sure what Julian Vereker would make of Naim’s Mu-so soundbar but you gotta move with the times and the times they are a changin’. 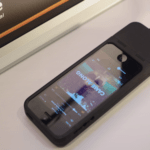 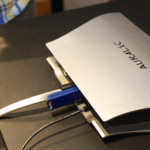