Splish, splosh. How far we’ve come in such a short space of time. These words were written whilst listening to Arcade Fire’s Funeral through a portable digital audio playback chain that would’ve been unthinkable when this album was released back in 2004.

First up, Master&Dynamic. New York City’s freshest headphone startup whose MH40 over-ear cans are so money at US$399 that they net a three-pointer from with the first shot on goal. The ubiquity of portable-friendly headphones of this caliber would have been inconceivable in the mid-noughties. Now Master&Dynamic rank right up there with the KEF M500 and Sennheiser Momentum, channeling the best qualities of each: meaty and detailed with super-wide staging.

The MH40 sound okay powered by your laptop or smartphone’s headphone socket but to get them sounding great you’ll probably need a half-decent headphone amplifier/DAC. Those strapped for cash should look no further than the AudioQuest Dragonfly v1.2 – US$149. I’m currently using the Chord Hugo, a far superior and (it has to be said) much more expensive way of getting the most from your digital audio streams on headphones. My MacBook Air streams the Plaid album from Google Chrome to the Hugo over aptX Bluetooth — it sounds mighty fine.

You might think it odd that an article titled such as this begins with three paragraphs about playback hardware but that’s because context is key: you’ll need half-decent gear to properly appreciate the jump from lossy to lossless streaming, a sentiment first explored earlier this year when I exhorted more casual listeners to get better hardware before going Pono.

If all you use to listen to music is your smartphone’s stock earbuds and/or laptop speakers, stick with Spotify. It’s terrific for casual listening with base-level gear. However, if you’ve a headphone rig or two-channel system that resolves minor peturbations in source quality, read on. You’re in for a treat. 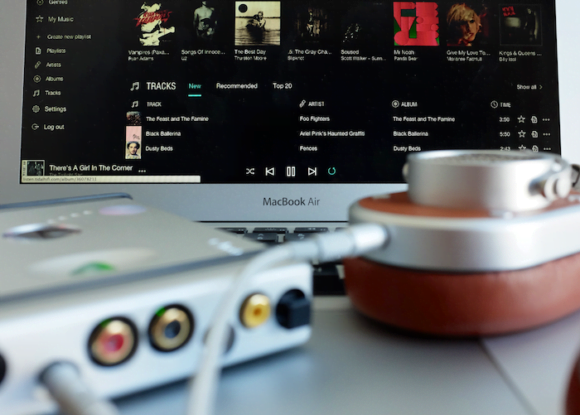 With the right hardware pulling your audio playback strings, the jump from lossy to lossless is like moving from McDonald’s to In-N-Out or from Hungry Jacks to your local hipster burger joint. And no, hi-res isn’t a gourmet meal, it’s an additional slice of cheese and a pickle.

Lossless streaming has been available in certain parts of Europe for some time now. Qobuz Hifi currently services Austria, Belgium, Germany, Ireland, Luxembourg, Netherlands, Switzerland, United Kingdom with CD-quality audio for 20GBP/month but its recent financial woes have no doubt slowed its roll out across the pond.

Norway’s WiMP has endured no such funding issues. Launched in 2013, its ‘WiMP Hifi’ lossless streaming service meets demand in Denmark, Germany, Norway, Poland and Sweden for €19.99/month whilst the rest of the world either gets with a VPN or looks on in envy…until now.

This week WiMP re-brands itself as Tidal for its UK and USA launch. Deezer’s Sonos-only partnership aside, Tidal is the first company to offer CD-quality music streaming Stateside; that’s 16-bit/44.1kHz FLAC for the more tech-savvy readers among you.

Brits won’t see anything new in Tidal – they’ve had Qobuz and WiMP for some months – but the novelty of CD quality music being piped into the USA for the first time has already solicited excitable but concise posts from Audiostream, Inner Fidelity and Computer Audiophile. You can read a more thorough set of first impressions over at TONE Audio.

I’ve been using a WiMP Hifi subscription for the past two months and today I logged into Tidal for Plaid’s latest long-player to confirm the obvious: that it sounds as good as its Scandinavian forerunner.

And you don’t have to take my word for it – a seven-day trial is available to anyone with sufficient curiosity and bandwidth. Those who registered interest in Tidal Hifi soon after its first murmurings in September should have already received an email offering a VIP trial of 30 days. If the superior sound quality doesn’t get you then perhaps the 75000 music videos might.

Switched-on listeners in the UK will probably have clocked the biggest difference between UK and US services: price. In the USA, Tidal Hifi will cost you US$19.99/month whereas in the UK it’s 19.99GBP (~US$30).

Tidal have promised access to 25 million tracks but the US and UK libraries operate independently of one another; they don’t share the same database of songs – something that’s obvious at launch. A search for Robyn Hitchcock yields sweet FA in the USA but fourteen albums show up on when logged into a UK account. 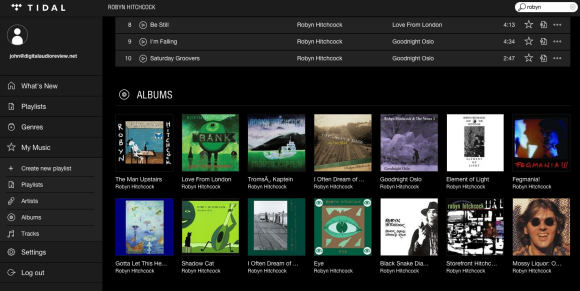 The differences don’t end there. One of Tidal’s key selling points is its editorial content written by music journalists and the like. “UK editorial for the UK site and US editorial for the US” says Tidal PR spokesman Andy Napthine. You’ll also find territory specific playlists relating to events happening in your part of the world.

On an Australian launch date I’m sworn to secrecy – sorry – but be aware that it IS coming. In the mean time, a VPN service will get you up and running. Despite Tidal’s generosity in furnishing this reviewer with trial accounts, their geo-tagging locks access down pretty tight. I’ve been obliged to use the Hola VPN Chrome extension to ensure logins aren’t rejected due to an ‘unidentified network error’ . Good job then that Tidal insist on Google Chrome as the browser to be used with their service.

Apps for Tidal streaming also exist for iOS and Android – grab them from the Apple App Store and Google Play Store. While you there, pick up the Hola VPN app to see you through any regional restrictions. (Thanks to Computer Audiophile commenter Walcascar for the heads-up on that).

If you’re concerned about the data usage incurred by streaming lossless audio over your 3G or 4G mobile connections, then don’t. Download the songs over Wi-Fi before heading outside with Tidal’s ‘offline listening’ mode handling playback from the app’s offline cache.

The implications of this new service are huge. Assuming enough people care about CD-quality audio then Tidal – and services like it – can expect to see steady growth. The upshot might mean fewer lossless downloads being purchased, reflecting the recent dip in iTunes music download sales most likely caused by Spotify, Deezer et al.

Owners of bleep.com and Boomkat will no doubt be keeping a close eye on sales figures as lossless streaming culture takes a firmer foothold in the marketplace. Perhaps these downloads stores will diversify with more hi-res content? 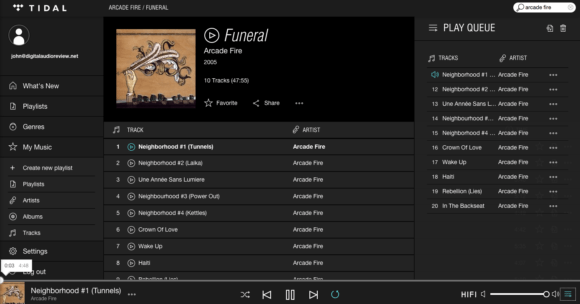 And there’s the compromise: you don’t own music with a Tidal Hifi subscription. You rent access to a library over which you ultimately have no control. I’ve already written about how WiMP’s library might not be sufficiently comprehensive for the most rabid of collectors (that’s me). Contractual disputes with record companies can see albums vanish overnight as evidenced by the disappearance of World Peace Is None Of Your Business from Spotify after Morrissey’s spat with new label Harvest. A few artists who enjoy the luxury of contractual control over their music might baulk at the whole streaming model altogether – Taylor Swift has refused to let her new album feature on ANY streaming service.

So let us not get carried away with burning our CD collections or throwing our music servers off the balcony into the swimming pool below just yet. (What? You don’t have a pool?)

The final word here goes to Xuanqian Wang from AURALiC whose Aries streamer already supports both WiMP and Qobuz out of the box. Wang emailed me this morning with news that Tidal support on the Aries will arrive later month, just prior to US Thanksgiving. The irony that the new Aries firmware and Lightning DS app will also support the direct connection of local libraries stored on USB hard drives should’t be lost on anyone. Rented access through streaming and ownership of locally stored downloads will eventually find some sort of symbiotic equilibrium. For now at least, CD quality streaming is super-exciting in its newness and at $20/month it’s time to at least consider switching up from Spotify. With even a modest audio system it’s well worth it. 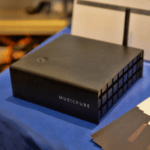 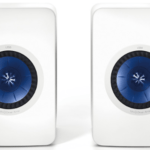