Have ears, will travel. In Australia, we have the Great Barrier Reef and lobsters the size of canoes. We also enjoy spectacularly good weather most of the year ’round. The price we pay for this wonderment is the tyranny of distance. Australia is miles from anywhere. The flight time from Sydney to Tokyo is nine hours, it’s twelve hours to Los Angeles, sixteen hours to Dallas, twenty hours to New York, twenty hours to anywhere in Europe. Gulp.

In the past twelve months I’ve clocked up some serious audiophile airmiles in covering audio shows: the Fujiya-Avic headphone festival in Tokyo, Munich High-End, the New York Audio Show in Brooklyn, T.H.E. Show Newport Beach, RMAF in Denver and The Australian Audio and AV Show in Melbourne.

Another fellow not afraid to take a plane from these fair to elsewhere is George Poutakidis of Addicted To Audio and BusiSoft. The former is the name of his Melbourne hi-fi store, the latter his distribution company. Poutakidis has all but cornered the Australian market for the distribution of DACs, headphone amplifiers and headphones not already handled by the big boys.

Long before the more established stores moved on computer audio, Addicted To Audio was the go to location to audition DACs. Whilst his competitors handle the likes of Meridian, AudioQuest, Musical Fidelity, Rega, Cambridge Audio through long-established distribution channels, Poutakidis has made it his mission to snag almost everything else. And boy has he succeeded. It’s easier to list the brands he doesn’t look after!

Watching Poutakidis walk the floor at CanJam ’14 in Denver is all it takes to see witness the breadth of his head-fi-related coverage. They’re all here! Reeling a few names from the top of my head: Woo Audio, ALO Audio, AURALiC, CEntrance, Audeze, Resonessence Labs, Light Harmonic, Astell&Kern, RHA, Calyx, Abyss, Cypher Labs, Cardas, Grado, MrSpeakers. The list goes on and on.

Poutakidis also popped up at the Munich High-End show in May and at time of writing is enjoying a long weekend at the Fujiya-Avic Autumn headphone festival.

His frequently flyering is clearly paying off. Addicted To Audio are now the dominant head-fi store in Australia and for the second year running they effectively owned the Headzones space at the Australian Audio and AV Show. With Sennheiser not signing on to exhibit this year, you have to ask who benefits more from Addicted To Audio’s presence, the Chester Group or George Poutakidis? Think of it this way: remove Addicted To Audio from the picture and you’re left with a well-presented stand dedicated to two (!) headphones from KEF and another run by smaller player Noisy Motel. And that’s yr lot. 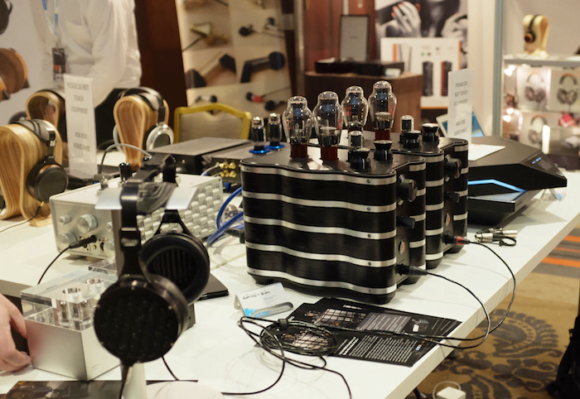 Driving the point home, Poutakidis and his store staff brought out the big artillery. A Light Harmonic DaVinci DAC (AU$38000) feeds Woo Audio 234 Monoblocks (AU$21000) which in turn drive the Abyss AB-1266 Planar Magnetic Headphones (AU$6700). On the adjoining table the same DAC furnishes the HeadAmp Blue Hawaii SE electrostatic headphone amplifier – tricked out with the ALPS RK50 pot (AU$8800) – and Stax SR009 (AU$6000). Where else would you get to hear the very cream of the headphone listening world? In Australia, nowhere but the annual audio show and the Addicted To Audio store. Don’t live in Melbourne? Time to get on a plane.

Air travel is the mother of necessity when you live down under and that’s as true for store owners, distributors and (some) consumers as it is for reviewers.