The sign above the door reads “RECORDS” with the store name proper relegated to window transfers. “The council won’t let me have anything bigger above the door so I thought ‘records’ would attract more people”, says proprietor Doug Gaddy with a cheeky grin.

In the window display of Boulder, Colorado’s Absolute Vinyl sits a pair of Klipsch KG4. Beneath a record rack in the middle of the store a pair of Klipsch Heresy. To their right, a pair of Vandersteens. Along the rear wall, a shelving display of all manner of vintage amplifiers and turntables from the likes of Sansui and Thorens. Shelf-mounted to the adjacent wall I spy a Rega RP1. 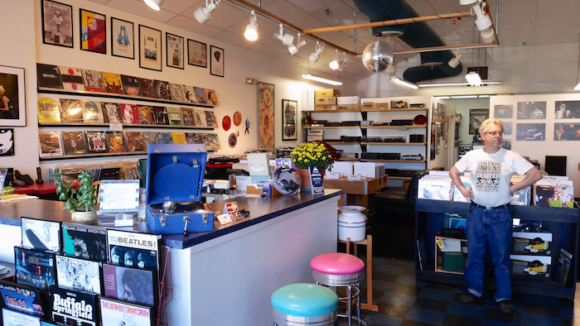 This store owner has made good on what must be face-palm obvious to many: selling new and used hifi perfectly complements the selling of news and used vinyl. As well as being an official dealer for Rega, Grado, Cambridge Audio and Music Hall, Gaddy has taken on hired hands to oversee the restoration of used gear with which one might compile an affordable system.

“We do a lot of handholding”, says Gaddy in emphasising his dedication to customer service. “Not everyone knows how to put together a system and we like to help people as much as possible”, he continues. The emphasis on affordability at Absolute Vinyl is unmistakable. And I don’t mean ‘$3K affordable’. We’re talking systems that head out the door for well under a grand.

Absolute Vinyl first opened its doors in the armpit of the late noughties recession in North Boulder, a good year or two before vinyl’s current renaissance. It was a location that Gaddy affectionately refers to as a “shithole”. He’d given himself two years to test the store’s financial viability but within eighteen months had moved it to bigger, cleaner premises in East Boulder. This is where Absolute Vinyl lives today.

Gaddy tells me he used to traverse the USA, selling vinyl at some of the country’s biggest record fares. Nowadays he restricts external sales to the annual Rocky Mountain Audio Fest in Denver. “There just isn’t enough time to do everything”, he says. 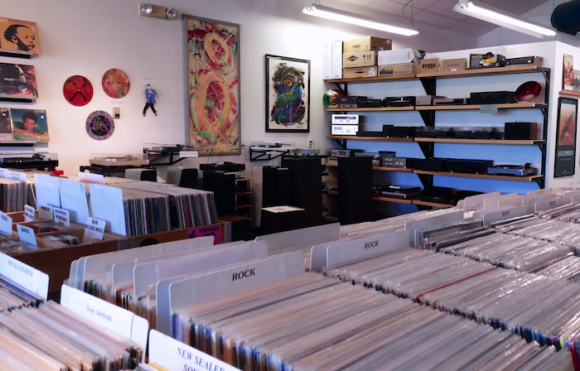 Our host apparently works a fifty-hour week in-store but spends a great deal more time at home grading vinyl. All used records are given the once over with a Spin Clean.

In maintaining connections with younger music tastes Gaddy also hosts a show entitled ’12×33 vinyl obscurities’ at a local radio station during which he “can play anything he wants”. Once thing’s for certain, the skinny jeans brigade are sure to be impressed by the selection of new titles that face the front door: War On Drugs and Shabazz Palaces are but two standouts.

I walk away with 6 (six!) Robyn Hitchcock 12” singles, the likes of which I won’t see again in a hurry, as well as minty copies of Duran Duran’s Rio and a stereo pressing of Bob Dylan’s Bringing It All Back Home – total cost US$70. There’s no doubt about it, pricing is keener than Albums On The Hill across town.

Absolute Vinyl makes system building viable for the man in the street. Gaddy’s enthusiasm for budget and vintage sectors is precisely the kind of approach needed to adjust open the general public’s perception that you need to spend thousands of dollars to get good sound. You don’t – and Doug Gaddy is here to prove it.

“We’d probably do much better if we were located in downtown Denver”, says Gaddy. “…but don’t tell anyone: hifi and vinyl together in one place – it works!”