Greg Stidsen is the director of technology and product planning for NAD. That’s ‘New Acoustic Dimension’ for those able to recall the 1970s. Back then the company was headquartered in the UK. Nowadays NAD sits with PSB loudspeakers and BlueSound streamers under the Lenbrook Group umbrella in Canada.

Stidsen’s role at NAD is to see over the brow of the hill, to plan and implement forthcoming products and to help NAD’s customer base connect with new technologies and ideas. He’s been in Australia this week to launch the new Masters Series that comprises four new models. Home theatre products are beyond the scope of DAR but there’s a pair of two-channel boxes that aren’t.

I first caught sight of the M12 Direct Digital pre-amplifier and M22 Hybrid Digital Power amplifier in Munich earlier this year. Seeing one sat atop the other this week in Sydney demanded some instant mental re-calibration: the M12 pre-amp is larger than its M22 power-amp sibling. Detailing what goes on inside each might explain why.

The M22 is not your Dad’s big hunk of Class A/B aluminium. It’s the first implementation of Bruno Putzeys’ self-oscillating, clock-free Hypex nCore modules from a mainstream manufacturer, allowing for low power consumption even when continuously outputting 250 wpc into 8 or 4 Ohms.

On nCore Stidsen says, “We have our own nCore module developed in close co-operation with Hypex.  It is based on the 400 not the 1200, but this is not a qualitative difference it only affects power output.  We can do this because we will build and sell a lot of units.  The 1200 was developed primarily for the pro market where huge power is required.”

“In the Hypex 400 module continuous power is 200W @8 and 400W @4.  In our implementation it is 250W @ 8/4 controlled by Erik Edvardsen’s precision clipper circuit.  The benefit of this approach is the ability to offer much more short term or dynamic power where we have 350W @8 and 600W @4.  This makes the power in actual use seem greater than the spec – in typical NAD tradition!”

NAD promise load invariance too. That means we’ll see the same frequency response no matter the impedance load provided by the connected speaker. All protection circuitry can be found in the switch mode power supply and a DC blocker has been integrated into the feedback circuit. 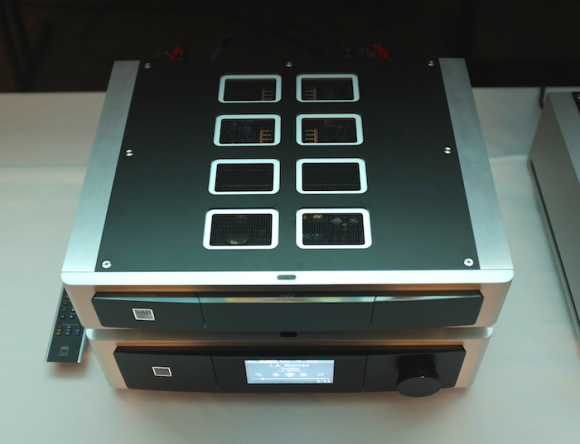 Fronting the M22 is the M12, a ‘direct digital’ pre-amplifier. First developed for the M2 amplifier and later seen in the C390DD integrated, lossless digital attenuation is handled by Z-Tec semi-conductors.

Also making the jump from C390DD to M12 is NAD’s future-proofing “Modular Design Construcion” (MDC). That means optional boards are available for MM/MC phono stage, HDMI (for Blu-Ray audio) and BluOS network streaming. The latter enables streaming from local server or cloud service over Ethernet of WiFi as well as aptX Bluetooth streaming. It’s also a requirement for controlling the M12 via tablet or smartphone. Otherwise you’ll be using the M12’s TFT touch screen for streaming digital audio from a host PC. The USB here is asynchronous and supports PCM up to 24bit/192kHz but no DSD as yet. 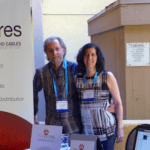 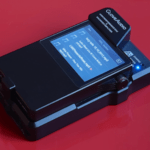