The previous editorial on the need for the hi-fi industry to build a bridge to the man in the street solicited this email from Cameron Pope of Sydney’s Krispy Audio. He’s Australia’s distributor for VPI Industries and Manley Labs .

“Before I got into the hifi game, not a single friend of mine had anything more than maybe Sony earbuds to replace their Apple ones.”, said Pope.

He continued: “You know the other thing I’ve noticed regarding TMITS? When he does get to hear high-end audio, he’s often so conditioned to poor sound that he doesn’t always like what he hears. A generalisation perhaps but many non-audiophiles are used to augmented bass and treble and find it very confronting when they hear a decent midrange reproduction. I even found this when I suggested a mate move up from his Sony earbuds to Shure (which for me are midrange kings). It took him about a month before he finally said he liked them!”.

An interesting point that many of us might look past: there’s an education to be had in knowing what to listen out for. Assuming there are some basic objective tenets of what constitutes ‘good sound quality’ the entry-level audiophile must embark on a journey. He can educate himself by turning over gear every few months or by hanging out with fellow audiophiles with similar music tastes and budgets. He can attend socially-centred audition evenings. He can join his local audiophile society.

One thing’s for certain – such opportunities for exposure to better sound must be inviting. Judgment of TMITS’ Bluetooth portable speaker or love of poor quality source material must be (temporarily at least) put aside in favour of getting him across the threshold, to sit down and listen to something better. Subjective tastes also play a part – he must find what he likes among a forest of available options.

So, pour the fellow a drink, offer him a slice of cake. Take the weight off.

I’ve previously suggested that those hosting hifi demos should treat their guests as if they would visitors to their own house. For some of the smaller distributors in Australia these are one and the same – their hifi demo space is their home.

It would be disingenuous to state that it’s all about the music – it isn’t. If it were, those Macbook speakers and white earbuds would do just fine.

Colleen Murphy’s super-successful Classic Album Sunday events don’t see the source material played back through crappy hardware; turntable, amplifier and loudspeaker choices remain points of pride (as well as solid marketing opportunities for the brands involved) but the music is always the number one priority. That’s what makes the Classic Album Sundays brand so strong and monthly events now run in New York and London. 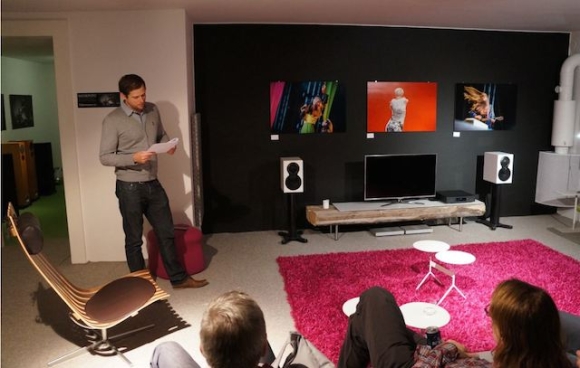 Music first, gear second is also the modus operandi of Linn Lounge events of which three are taking place down under next week . Linn’s Australian distributor is at pains to point out that it’s a branding exercise for Linn and not a hard sell. It’s a chance for the curious to experience good sound without being whacked upside the head with (what some might refer to as) techno babble or sales pitches.

Food and drinks are served whilst ‘Studio master’ (24/96 PCM) versions of a classic artist’s music are spun on a Linn system. Occasional breaks afford the presenter an opportunity to expand on a song’s history or point out what to listen for.

Next week sees Linn’s international brand developer manager Robert Wong conducting three events in almost as many days and as if to immediately contradict the above, Wong’s first stop in Sydney will focus on the specifics of a Linn Exakt system. The Melbourne leg will centre on Johnny Cash whilst Perth plays host to the music of The Eagles.

And if those artists are too white-middle-aged-male for your music tastes then know that a Linn Sneaky DS will be given away at each event. Entry is free but places must be booked in advance using the links below.

Caring about sound quality isn’t an either/or state of being. It’s a continuum. Some are more into it than others and each position along its sliding scale is equally valid. To say otherwise is to fall victim to (inverse) snobbery.

Ongoing exposure to better sound eventually pools into what one might loosely refer to as experience. This journey might take our newcomer all the way to the summit of Audiophile Mountain or it might see him put down roots somewhere near base camp. Either way, he’s stationed himself at a higher altitude than the valley of laptop speaker and soundbar listeners?

And if you think that sounds contradictory think of this way: it’s not the hardware that our entry-leveller ends up with that matters most, it’s that he isn’t simply accepting the default position of not caring. Instead, he’s found a taste for good sound (even if he can’t yet afford all that he desires).