The man in the street (TMITS); the poor fella must be feeling punch drunk right about now. In the early noughties he was told by the music industry that MP3s were transparent to the original CD; and so he bought/ripped/torrented them by the truckload.

Ten years down the line, those same industry marketing bods – including some from the hi-fi industry – are now telling him that MP3s are garbage and that he should be listening to hi-resolution audio (HRA) or – at the very least – lossless audio.

There’s a fresh round of MP3 kicking going on. It’s yesterday’s format (apparently). With this new message aligning with the long held sentiments of the audiophile community there’s a healthy dose of “I told you so” being played out in the more pious quarters.

If we genuinely wish to engage TMITS with the promise of good sound it won’t help to pity or pillory his choice of archive format, soundbar or headphones.

I don’t know about you but most of my non-audiophile pals listen to music via laptop speakers. At best they’ve opted for Beats ‘phones (or similar – House Of Marley anyone?) running from their smartphone. Since hooking into the likes of Spotify and rDio not one of them purchases music from download stores.

The odd friend has a decrepit 90s mini system that’s all but falling apart but yesteryear’s traditional two-channel setup of CD player, amplifier and loudspeakers has slowly evaporated from TMITS’ consciousness. 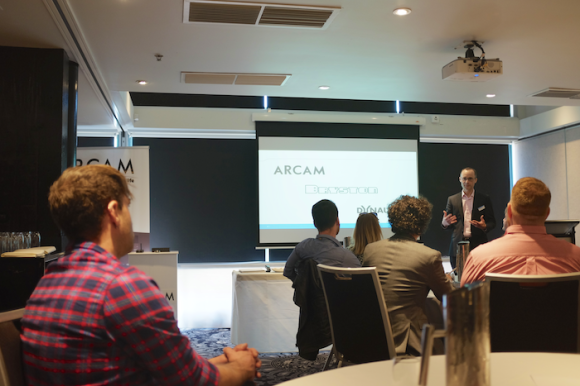 No surprise then that the conversation about the benefits of HRA is lost on TMITS. He complains of reading conflicting reports on whether or not HRA’s benefits would be audible to him. One thing’s for sure, an HDTracks download is wasted on laptop speakers or a soundbar. The iPhone won’t decode the damn thing properly and a dedicated portable audio player is, at this stage in the game, one pocketable device too many.

The horse currently sits behind the cart.

Shouldn’t we be talking hardware before we talk software?

For the TMITS to hear the benefits of HRA first hand he first needs better audio gear. Gear that will resolve the differences between MP3/Ogg and FLAC/ALAC. Once that’s in the bag, only then can we switch the conversation up to the merits of 24bit/96kHz PCM, 24bit/192kHz PCM and DSD.

Being shown off in the Pier One Hotel’s main room was one heck of a system. Allow me to detail its contents: 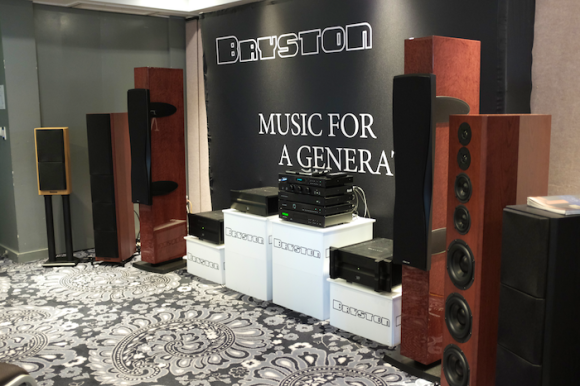 Hearing Stravinksy’s Rite Of Spring on this rig was something else. It triggered not only cerebral gratification but physical too – you could feel the music in your stomach and on your skin as much as you could hear it in your head.

This is a system aimed at the seasoned audiophile. With manufacturing cost considerations at the high end being less acute than at the entry-level, manufacturers like Dynaudio and Bryston can properly wield their R&D prowess.

But no matter how astonishing the end result the price tag reminds us that a starter system it is not.

Whilst I (obviously) don’t know everyone on the planet I’d contend with some confidence that very few enter the audiophile world by dropping this length of green. Going from laptop speakers to an $117k system isn’t the behaviour of the man in the street. His first steps are tentative; he’s full of questions and more-often-than-not doesn’t want to spend big.

And who can blame him when the music industry’s preferred format seems to shift every ten years or so. With $10/month for a streaming service subscription the TMITS sidesteps the format issue altogether. He can play it at home. He can listen to it on his smartphone. Streaming services are a risk free anchor to the world of music. 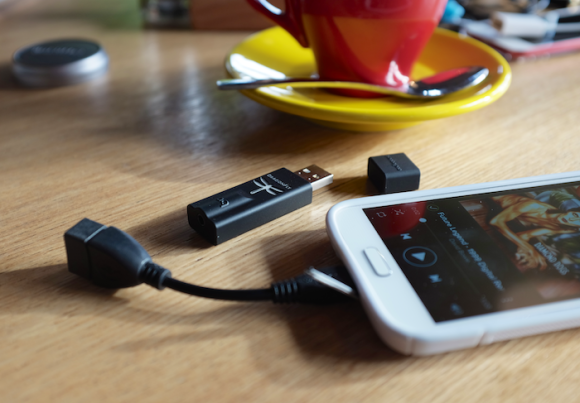 Anyone working in the PR or the sales side of the hi-fi industry will likely be on their feet at this point, ready to point out on how much TMITS is missing out.

Prior to firing up this monstrously impressive system, Sennheiser Australia’s Dan Woodall gave a presentation that ran with a Findus frozen meal analogy to illustrate how TMITS’ music consumption is a triumph of convenience over quality. An attempt to bolster this argument led to the detailing of how bitrate numbers between MP3 and CD differ by a large margin. Whilst this reasoning is more emotive than it is scientific, it is not without its merits.

The point is: we return once again to considering hardware that can audibly resolve these differences.

So – what gives? Building a bridge to TMITS doesn’t have to mean cheap and ‘cheerful’. With seriously good gear being more affordable than ever you don’t have to break the bank to get a taste of the high end.

$500 would get you into the great sound game with an AudioQuest Dragonfly v1.2 and Sennheiser Momentum headphones – a sublime combination that not only spruces up laptop listening but also the Samsung Galaxy S5 for on-the-go glory.

Stir in an additional $200 and you’re into the meatier, punchier presentation of Resonessence Labs Herus + MrSpeakers Mad Dogs; fully functional with both iPhone and laptop.

Much noise has been made about the Astell&Kern and Pono players– and with good reason too – but neither match up to the Sony NWZ-ZX1’s combination of sound quality AND features. The Sony has the better screen and the better (Android) interface. With full access to the Google Play store listening options takes in lossy streams from Pandora, Spotify and Qobuz all the way up to 24bit/192kHz downloads.

Pricing and availability varies between territories with the Australian price being the lowest in the world (AU$699) at press time. Sony shuttered the doors of most of its Australian retails spaces last year so purchase is an online-only affair; TMITS can’t audition a demo unit prior to handing over his credit card digits. In Japan, in-store demos are available to customers of Yodobashi Camera and North Americans shouldn’t have to wait too much longer for the NWZ-ZX1 to crop up at local electronics outlets. Amazon.com have begun offering the Sony DAP for US$699. 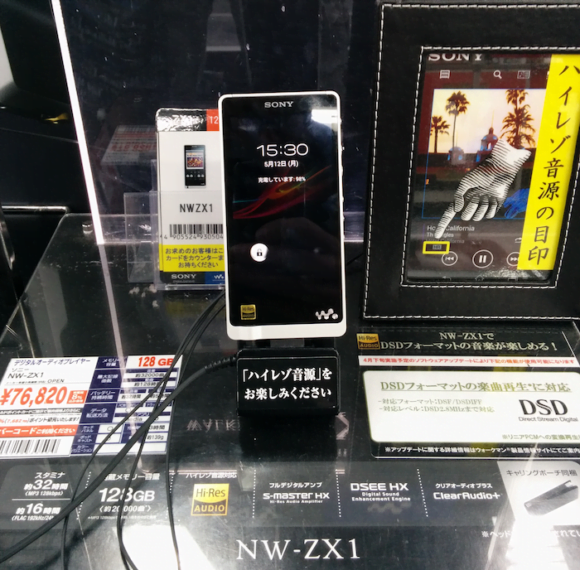 Don’t dig headphones? In two-channel land your first consideration could be given to the Vanatoo Transparent One actives. DAC + Class D amplifier + loudspeakers + cabling for US$499. Everything in one box – no more to pay. How did I stumble upon Vanatoo? At 2013’s T.H.E. Newport Beach Show is how – their demo room solely dedicated to a $500 system-in-a-box digitally fed over toslink by an Airport Express. The Vanatoos also handle Bluetooth streams but I’ve yet to be convinced of its aural satisfaction. Airplay sounds more fundamentally nourishing to these ears, even with lossy audio.

Got more moulah ready to drop? Allow me to introduce you to the KEF X300A. These are quite a bit better than the Vanatoo – there’s better bass control for a start. Whilst the X300A are definitely not an active LS50 they do get you most of the way there for considerably less financial outlay because, like the Vanatoo, they’re actives with a built-in DAC. Better still, there’s a pair of Class A/B amplifiers inside each speaker – one for the woofer, one for the tweeter. My listening tests revealed superior top-to-bottom layering than with any of the three amplifiers I applied to the LS50. Shop around and you can score a pair of X300A for AU$900 down under, US$799 in the land of the free. 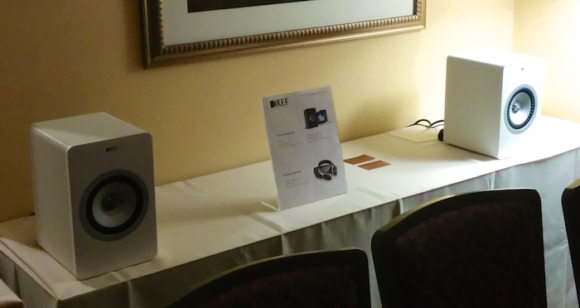 Next month, I’ll be reviewing the newer Wireless version that adds DLNA and Airplay streaming to the specifications sheet. Stateside this new version sells for a flat US$1k. Down under, AU$1300. Hats off to KEF America for demo-ing these at shows, giving almost as much airtime to the X300A Wireless as their high-end loudspeakers. If only someone could convince KEF to make the final leap and give these wonderful entry-level active loudspeakers demo room exclusivity. Imagine that: a show room with a pair of loudspeakers the only physical manifestation of playback hardware and where the music is streamed direct from an iPad’s Spotify app.

Not only do these Danes make their cabinets and drivers in-house, they now also handle the custom amplifiers that sit inside each (active) speaker box. A separate wireless transmitter is USB-connected to a host computer. The new DSP can accommodate XEO 4 speaker positioning close to the rear wall and/or room corners. Minimalism for the modern home rides again. The man in the street and his significant other would no doubt approve. 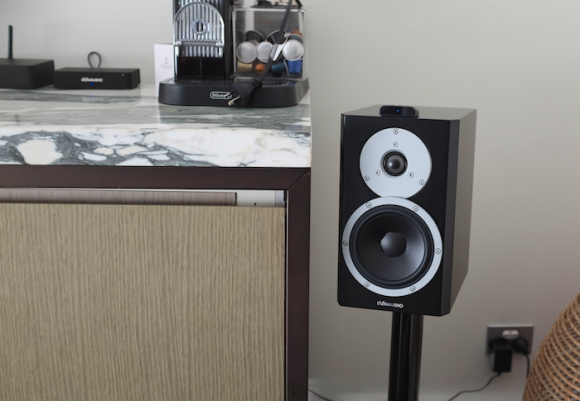 I’ve been jovially leaning on the Australian KEF distributor to conduct a similar type of demo at October’s Australian Audio and AV Show in Melbourne. With the new Reference Series launch on the cards, such a radical idea is sure to be squeezed off the agenda.

And that’s OK – but it’s active loudspeakers – or budget integrated amplifiers and standmounts speakers – that’ll bring TMITS to the yard. How about a room that showcases the LS50’s talents? KEF LS50 + Rogue Audio Sphinx + Rega RP1 spinning the black stuff – now that’d be a demo for our man in the street to remember?

At last weekend’s California Audio Show Wyred4Sound came the closest I’ve seen to date of this uber-simple setup: their mINT Class D integrated driving a pair of Martin Logan Motion 15 standmounts. Wallet damage for this pairing squeaks in under US$1600. No, that is not a misprint – a whole system for fewer dollars than the MS1 music server (US$1999) that streamed tunes to the mINT all weekend long. 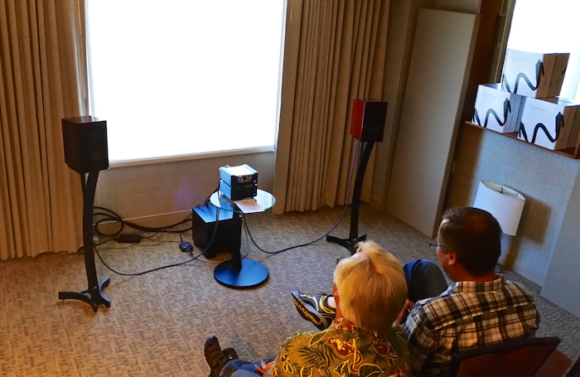 If you’re reading this in Australia, lamenting that the Wyred4Sound / Martin Logan offer is only available Stateside, then consider this (hint of the century): you’ll need the mINT’s power to properly drive a pair of Magnepan MMG. These unconventional looking loudspeakers do things that no comparatively priced box loudspeaker can. Their large surface area means you get exceptional micro dynamics, clean and tidy bass reproduction married to a HUGE wall of sound. The MMG are hands down the single biggest bargain in entry-level hi-fi right now. US price = US$599 w/ 30-day home trial. Oz price = AU$1099. Best of all they come flat-packed so you can easily stash the empty box under the bed.

Can’t afford a solo Wyred4Sound mINT at US$1499? Fair enough. Panic not. I’ve been getting terrific results with the REDGUM Black Series RGi35 and the AudioQuest Dragonfly v1.2 USB DAC.

Yet to be convinced that hardware choices such as those detailed above need to be made prior to HRA acquaintance? Ask yourself this: would you rather listen to a FLAC file through laptop speakers or the same music encoded as MP3 delivered by an entry-level head-fi / two channel rig? Yup, I thought so.

The conversation about getting better hi-fi gear into the man in the street’s life needs to be louder than the MP3 trash-talk. 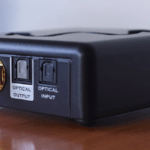 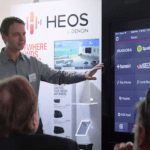