Local area networking. Almost 2TB of FLAC sits on an Antipodes music server at Darko HQ in Sydney. It’s my local music library from which I feed various D/A converters over USB. For out-of-house listening I take to an Astell&Kern AK120 whose internal storage can only accommodate 256Gb at any one time; I can’t have access to everything always. The content that sits on this South Korean digital audio player (DAP) therefore changes on a weekly basis. Albums gets nixed as new ones come in. The AK120 has revolving door access to the larger locally-hosted music library.

Non-audiophile pals spying this portable setup are naturally curious about the what, the why and the how. Despite the A&K GUI not being a slick as your average smartphone these guys (and girls) happily swallow the notion that better hardware can solicit better sound. Several have listened to the AK120 firing into KEF M500 headphones and found themselves seriously impressed by the sound quality. They’ll admit to it being a great deal better sounding than their Apple wotsit or Android thingo. These friends aren’t immune to the charms of better sound quality and can see the value in a $1500 portable rig like mine. When the conversation turns to FLAC and the cost of each download their enthusiasm comes to a halt. It’s not hard to to see why: $12, the cost of a ONE lossless download, buys them a month’s access to 18 million (lossy-encoded) tunes at Spotify. 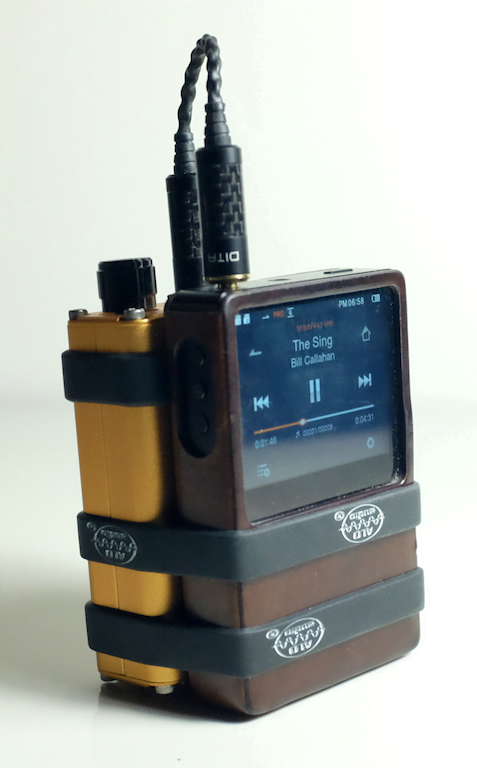 Such anecdotal evidence aligns with Stateside music industry stats published this week that in Q1 – Q2 of 2014 downloads are down 13%, vinyl is up 40% and streaming is up 42%. Great news for streaming services and vinyl pressing plants, less so for download stores.

Streaming services are the rising tide in music supply and lossless streaming is its second wave. Once lossless options are firmly in place with the leading streaming players (Spotify and Pandora) download vendors will find it increasingly more difficult to compete on price alone. They must offer a ‘value add’ beyond standard Redbook. Higher sample- and bit-rates are one of the few ways download stores can keep streaming services from eating into their bottom line – I’m looking at you HDTracks. But for how long? And how long until high resolution audio (HRA) streaming becomes a reality for the niche that demands it?

The two biggest constraints for HRA streaming are bandwidth and download quotas. Qobuz’s Jessica Martinez claims 4G mobile networks already offer sufficient bandwidth to handle HRA streaming (which I don’t doubt). What will pull the handbrake on mobile HRA streaming are download allowances. Between 2-4Gb per month is common with Australian mobile phone carriers. That’s sufficient for Aussies to hammer lossy audio streams from the likes of Deezer, MOG and Spotify without worrying about incurring penalty data rates for excess usage.

However, even a move to lossless (Redbook) streaming will see many checking their data usage more frequently. Assuming 300Mb as typical for a FLAC’d album, streaming three or four albums will chew through over 1Gb of data. A 4Gb mobile plan will net around sixteen full album streams. What hope for HRA streaming then? At home the data usage issue might not be as pressing. Download allowances tend to be more generous on residential Internet connections. I’ve been getting the most out of mine with the (rather agricultural) Qobuz desktop app in accessing their ‘Hi-Fi’ lossless streaming service – it sounds superb. 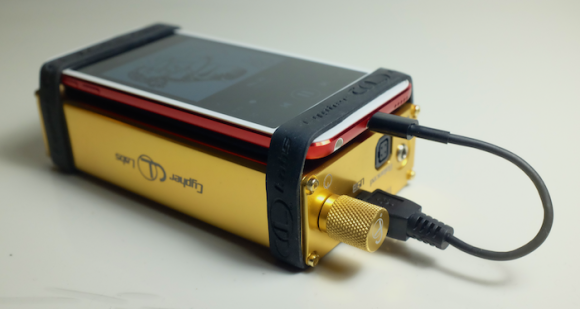 Clouding the issue. The line between download store and streaming service is blurring. We talk about streaming services (Spotify, Qobuz) and download stores (Boomkat, Bleep) as if there were no crossover between the them. But there is! Most streaming services provide an offline listening mode. Each album or playlist can be downloaded and stored within the streaming app’s cache for listening when you like, as many times as you like. When you’re done, delete and download another. Sound familiar? It should. (Remember how digital audio players (DAPs) are replenished from from local storage?)

The line between cloud- and home-stored music libraries is also blurring? With CD-quality streaming from the likes of Qobuz and WiMP picking up speed the notion of downloading to own might eventually be supplanted by downloading to rent.

When listening off-line to either Spotify or Qobuz, music is nothing more than a rental from the great gig in the sky. We want permanence and stability from our music libraries with the ability to pull content to our listening devices on demand – that commands connectivity. We already have this connectivity with desktop clients and smartphone apps but not so with DAPs. 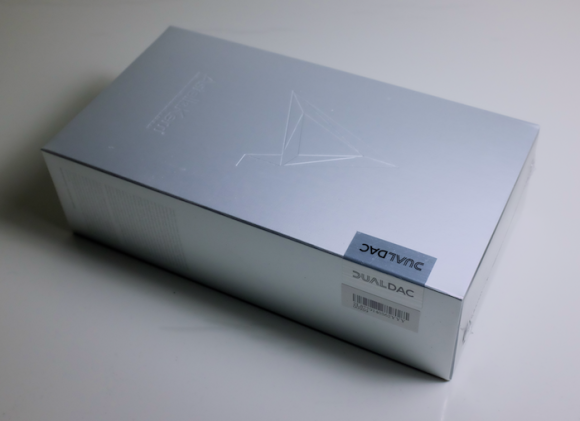 iRiver has recently shown that it sees the importance of connectivity. Their new range of Astell&Kern players add wireless capabilities for a reason. The short-term goal is to enable downloads (to own) from HDTracks and Qobuz. How long before Astell&Kern’s new Android operating system can play host to the native Qobuz app and therefore open the door to offline listening and downloadable rentals? VP James Lee’s aspirations don’t stop there. Imagine being able to pull content from your home-based music server to your Astell&Kern player over wi-fi whilst on walkabout. Streaming or downloading, your home server would behave just like cloud storage.

These capabilities are nothing new. They have existed for iOS users for several years already. Take the StreamToMe app for example. It’s can stream music from an web-connected server running ServeToMe over WiFi and cellular networks. At work and want to tuck into those rare funk grooves sitting on your home server? No problem! StreamToMe can pipe those tunes to your iPhone, iPad or iPod Touch.

Apple portables aren’t without shortcomings: a) they don’t sound as good as the Astell&Kern DAPs and b) can’t deal anything beyond 16-bit/48kHz. HRA is yet to get a run at the iTunes store but who knows what the future holds. Chris Connaker reckons no way.

Thinking back to my non-audiophile pals: they demand an all-in-one device that plays HRA, sounds better than iOS or Android smartphones and – here’s the kicker – runs native streaming apps from Spotify, Deezer, MOG/Beats, Qobuz or WiMP. In order to solicit mainstream interest the ideal DAP must serve to lift the sound quality of streaming services as well as locally hosted tunes.

Two such products spring immediately to mind: the Harman Kardon edition of the HTC One (M8), up for grabs in the US market but tied to Sprint network provision. Hardly an everyman product. 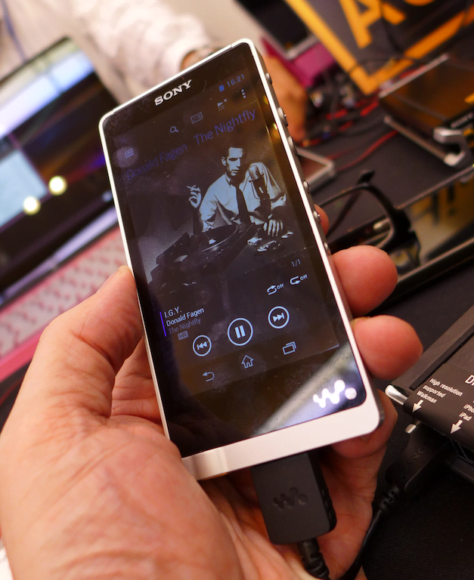 For that we must look to Sony. HRA – this Japanese giant is madforit right now.

I’ve mentioned their flagship HRA Walkman several times in the past few weeks (and with good reason). The NWZ-ZX1 is essentially an Android phone minus the phone. It’s capable of playing back up to 24bit/192kHz PCM audio. Sony have customised the operating system with playback controls for locally stored content but it remains an Android device at heart: WiFi connectivity means the user can install Android-native apps from the Google Play Store. Qobuz, Pandora and Spotify – COME ON DOWN! Its sound is crisp and clean and considerably better than its closest rival, the Apple iPod Touch which in turn already aces the sound quality of a Google Nexus 5.

Add Sony’s own PHA-2 portable DAC/head-amp to the NWZ-ZX1 and you get a completely different sound: fuller bass and richer midrange combine for an altogether warmer, less incisive presentation. Think: moving from a Trends T-amp to Rega Brio-R. 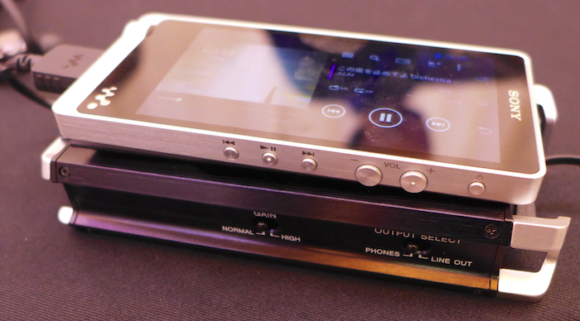 Off-board units like the PHA-2 remain relevant because they invariably bring further improvements to established players. Add the ALO International+ to the original AK120 and you get a sound far superior to the DAP running solo. Strap a Cypher Labs Theorem 720 DAC/amp to an iPod Touch and the leap in dynamics, bass response and tonality is something to behold.

Only the latter pairing delivers streaming services. With the Apple device serving as transport and control interface, the hard work that goes into developing a slick operating system GUI is already taken care of. The ability to install pre-existing iOS streaming apps (Qobuz, Spotify, Deezer, MOG/Beats) means the end user doesn’t have to forego essentials like ease of use and gapless playback.

The photographs featured in this piece map out my investigative path for the next few months. Expect to see individual reviews for the ALO and Cypher Labs units in the very near future. After that I’ll be looking at the all new AK120 II, the Glove A1 (from CEntrance) and the Chord Hugo.

No doubt about it – these are exciting and rapidly changing times for portable hi-fi and for which streaming service integration might prove to be pivotal.