Up until fairly recently, headphone listening has by and large been a factor of necessary convenience for me: earbuds on the train, a pair of Grados for late night listening in a shared house, a pair of Sennheiser so I could watch TV whilst my husband listened to music on his own set of headphones. Once we moved into digs with multiple rooms and no shared walls, the Grado SR80s gathered dust, abandoned for loudspeakers. I understood the utility of headphones but I couldn’t bring myself to journey too far up the food chain.

I can pinpoint the moment all that began to change: mid-2011, the first time I tried a truly high-end set up. I put on a pair of Audeze LCD-2 to listen to a Beatles vinyl rip through a Cavalli headphone amp and I got lost for ages. Since then, I’ve started to pay a lot more attention to the state of the headphone art. Audeze might have re-ignited the trend for more and more orthodynamic models coming to market but not everyone can enable their lust for orthodynamic headphones with two grand. Even a thousand bucks might be too much green for some. What to do? 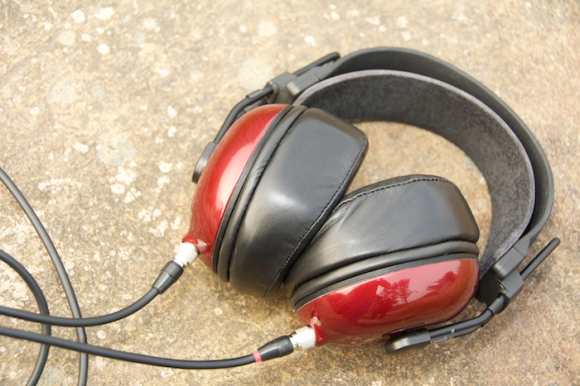 You make the acquaintance of MrSpeakers is what.

Of his first and super successful Fostex T50RP mod, the MrSpeakers Mad Dog (US$299), Dan Clark says, “I had never modified a headphone before, only done speaker design. I was new to Head-Fi, and came across the Ortho “Mega Thread” and the T50 mod threads. They piqued my interest because the T50RP design looked relatively easy to work with and other’s experiences indicated it could transform to a closed headphone with sound experience that bellied its relatively low cost.”

“Another motivation to try the T50RP also arose from sharing a home office with my wife. She really was often bothered by the leakage from my open headphones, especially if the music involved David Byrne, so I wanted to try a closed phone first.”

Like MrSpeakers Mad Dog, the Alpha Dog (US$599) are a modified Fostex T50RP. However, this more dramatic remake/remodel saw Clark reaching for something entirely new: the world’s first 3D printed headphone cup. This fast-growing manufacturing method allowed for a latticed double wall which in turn makes for a much lighter closed-back headphone. 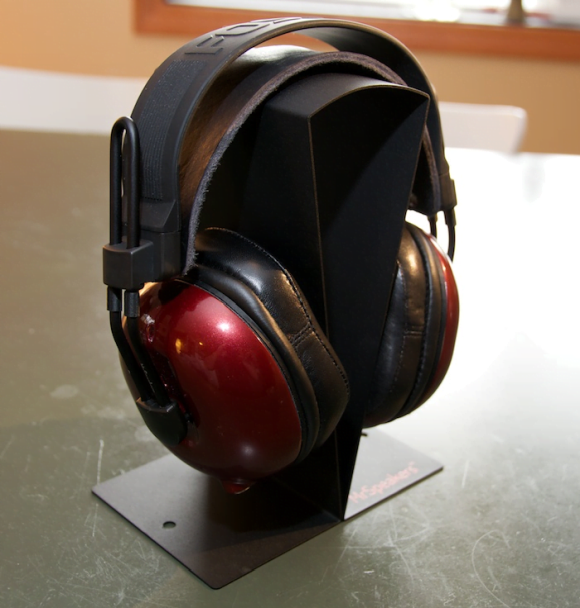 Clark again: “The inspiration to use 3D came as we were assessing upgrades to the Mad Dog and exploring wood cups. We started by using 3D printing as a rapid prototyping system to assess geometry options but quickly realized we were hearing better results than we expected simply based on cup geometry. As we began to deconstruct how the 3D printing fabrication process differed from injection molding we came up with a way to re-engineer our cup design to take advantage of how 3D printers work to create a new kind of enclosure: one with greater rigidity and improved isolation than conventional plastic parts, but without a big weight penalty.”

“The process of making the Alpha Dog cups is incredibly involved. Each part has to go through many steps to become finished-goods. Let’s just say that there were a few times where I almost gave up along the way. Making the Alpha Dog was really, really hard. From finding the right printers to selecting the right filament and creating a scalable painting process, every step took a lot of innovation and work and there were no success stories from which to draw inspiration.”

On aesthetics and comfort I find the Alpha Dog both attractive and easy to wear for hours at a time. They’re lighter on the head than any Audeze and the lamb-leather earpads and leather headstrap allow one’s head to ‘breathe’ during seriously long listening sessions. Like Steven Stone, I wear glasses and so appreciate the ‘cushiness’ of the pads; I don’t have to remove my glasses to get good seal and the Alpha Dog don’t fit so tightly that the frame arms are jammed into my skull. While my husband found them a little bit too tight for his larger-than-average noggin, they fit me just so, neither gripping too tightly nor feeling as they they could easily slide off during a particularly exuberant seat dance. The weight distribution across the strap means zero headaches or fatigue. I’ve been known to put a folded up washcloth on the top of my head for extra padding during long sessions with my Grados – there’s no need for such trickery here. 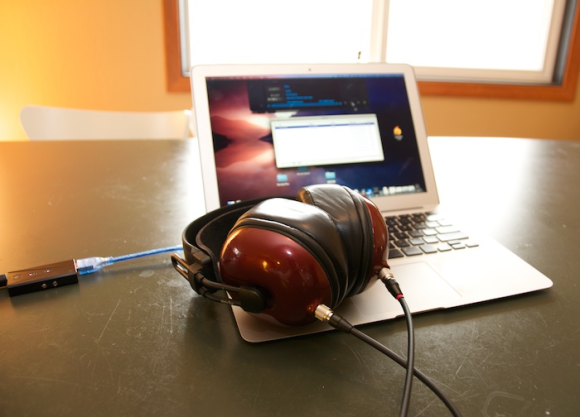 One of the Alpha Dogs key strengths is isolation. It’s a little disconcerting at first. With external disturbances sealed it’s easy to get lost in listening. I succeeded in burning dinner and really ticking off my dog as a result.

Listening-wise, the Alpha Dogs have a spacious soundstage and a sense of openness that I wasn’t necessarily expecting from a closed-back headphone; it feels like the sound extends far beyond the confines of the cups. On this facet alone, it’s mission accomplished for Señor Clark. The openness was especially evident on the live version of Zoe Keating’s “Optimist” that closes album Into the Trees. With Keating’s loops and samples chasing each other back and forth from one channel to another, it makes for dizzying listen that, in the right circumstances, will set the hair standing on the back of one’s neck.

The treble is very well-controlled and smooth but can be tweaked using the “Doggie Treats” accessory pack: “Tuning Dots” that can be applied to the ear side of the driver to smooth treble response and felt discs that can be inserted under the ear pads for the purpose of lessening the overall eagerness of the treble. I experimented briefly with the felt discs out curiosity but didn’t really find a need for them. They darkened the treble too much for my tastes but the ability to tweak is always welcome, especially for those with brighter sources and amplification. At the other end of the frequency range I noted plenty of bass. How much is plenty for you will come down to personal taste. Thankfully Dan Clark has made that tweak-able too. Turning the “Very Bass” screws that sit recessed beneath an opening on the upper-side of each cup can give you more or less to suit personal preference — be warned that there is a nominal fee for having them retuned to factory settings if you get too heavy-handed.

I tried the Alpha Dogs on a number of listening set-ups, and I found them consistently strong performers. They managed surprisingly well simply plugged into the headphone jack on my iPhone 4S, but dynamics really stepped up several notches with more specialised amplification. With LH Lab’s Geek Out and a 24bit/48kHz FLAC of Lorde’s “Royals,” I found them assured, but the bass seemed a bit light and lacking in bloom until I turned on the Geek’s “3D Awesomifier”. This brought on more weight and oomph. Kinda reminiscent of hitting the “Bass Boost” button on an old Sony boom box that I owned as a kid. 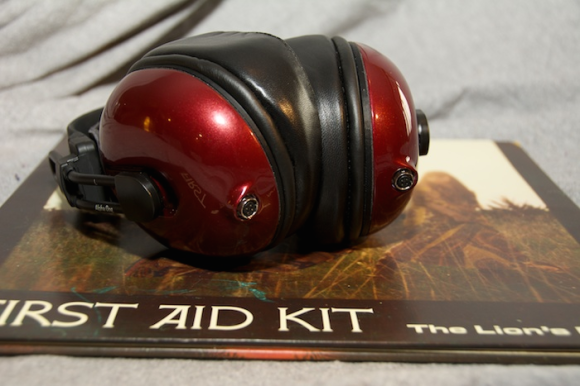 Moving upmarket to the headphone output on the AURALiC Taurus Pre brought with it a whole load more ‘awesomification’ — that same Lorde track gained in heft and three-dimensional spaciousness. Bass notes displayed cleaner definition. Further experimentation demonstrated that using an Audio GD Compass, Tom Waits’ “Last Leaf on the Tree” brought a richness of tone to the fore, while the Cypher Labs AlgoRhythm Piccolo plugged into the headphone out on my MacBook Air left me commenting on the clarity and surprising sweetness of Keith Richard’s backing vocals.

My favourite listening experience by far came from Ry Cooder and Vishwa Mohan Bhatt’s “A Meeting By the River”. This superbly recorded album of steel guitar and Mohan Veena interplay is one of my favourites for late night listening. With with the Auralic Taurus Pre on amplification duties, the Alpha Dog showed virtuosity with string timbre and more natural tonal decay. While the Alpha Dogs do reflect upstream equipment changes their personality remains generally quite forgiving. 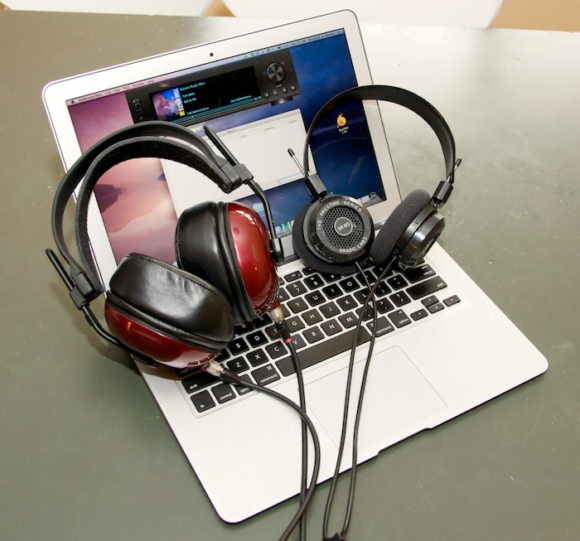 In comparison to my trusty Grado SR80, I felt that the sound stage was much more well-defined. The Grados have the larger “wow” factor when it comes to guitar tone and vocals; the midrange leaps out of the mix. In contrast, the Alpha Dog retrieve more detail from the entirety of the track, placing the instruments in what feels like a more realistic – or neutral – context. They exhibit less air than the open-backed Audeze LCD-2 that put me on this path – that much was expected. However, not once did I find the Alpha Dogs’ presentation to be closed in or claustrophobic. The sense of intimacy provided by the Alpha Dogs’ isolation doesn’t corner the listener into compromising on music’s inner-spaciouness. A rare quality.

I’ll likely stick to earbuds for public transit or overnights that require everything to fit neatly into one bag. For sheer comfort and isolation, the Alpha Dog are now my new reference for in-home listening. MrSpeakers’ 3D-printed Fostex mods are terrific all-rounders from which a rich and enveloping listening experience stems from supreme comfort and robust build quality. That’s worth more than a few burned dinners.

Kirsten Brodbeck-Kenney lives within earshot of the ocean on the Oregon Coast. In addition to her full-time gig as the local library director, Kirsten derives a small income from writing reviews for the audio press.