If you’re a manufacturer bringing a digital audio player to market in 2014 you’d better ensure that a) it can keep pace with the sound quality and UI stability of the Astell&Kern and Sony offerings OR b) sell it for less than the Apple iPod Touch (US$199+).

Light Harmonic’s subsidiary LH Labs is aiming for both!

Back in May, LH Labs completely overhauled their third crowd-funded digital audio device from iDevice add-on to fully fledged DAP. And as of right now you have less than 48 hours to snag the entry-level Geek Wave 32 at (apparently) less than manufacturing cost. US$166 gets you over the line for a product not slated to begin shipping until 2015.

Navigating the Indiegogo page isn’t exactly a walk in the park. It’s a mind-boggling array of upgrades and stretch goals that requires some serious effort on the part of the potential backer.

Let’s begin at the beginning.

Whilst the Geek Wave 64, Geek Wave (XD) 128 are ultimately destined for retailer networks the Geek Wave 32 is an Indiegogo-only deal. It won’t be available once this $1m-busting crowd-funding campaign wraps up. 32Gb of internal memory is user-expandable to 2TB with the addition of an SD card. When connected to your PC or Mac these will show up as mounted drives (as per Astell&Kern players). Loading files is then just a simple drag and drop procedure – no iTunes required.

The Geek Wave 32’s 3.5mm, 0.47 Ohm headphone output will drive 160mW into 16 Ohms so it’s not a real powerhouse. That said, it’ll be more than enough for most portable-friendly headphones. Owners of the KEF M500 and V-Moda M-100 are likely to enjoy a significant lift in performance. LH Labs’ campaign focus is on sound quality – how very Pono-esque. The main message of the associated promo video is that Geek Wave will trounce Apple devices for aural satisfaction. Unlike Apple devices, the 3100 mAh battery that fuels the Geek Wave 32 is user replaceable.

Looking at how the Geek Wave 32 is controlled we see echoes of its former incarnation as an iDevice appendage. Hardware buttons and a (fairly basic) user interface take care of the essentials: transport controls and volume attenuation. So far, so standard. However, Bluetooth connect it to your iOS or Android phone or tablet and a far more involved user interface becomes accessible via LH Labs own controls apps. 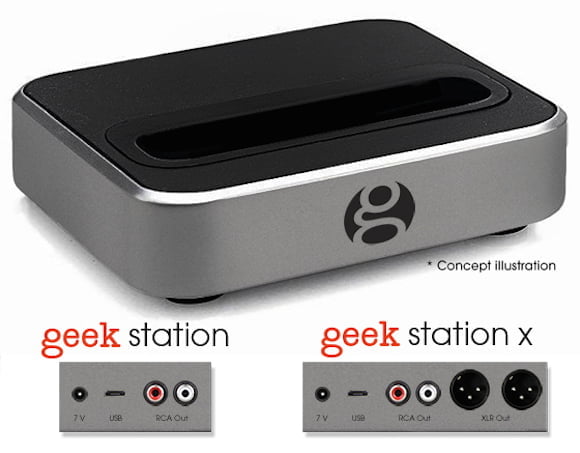 The Geek Station (US$189) and Geek Station X (US$229) are docking stands for charging your Geek Wave and/or a more elegant way of connecting it to your main two-channel rig without using a Y-cable on the Geek Wave’s 3.5mm line output socket.

Lastly, of note to anyone with a portable headphone amplifier / DAC whose connector is micro USB, LH Labs are offering a customised 1 metre length of their rather splendid LightSpeed USB cable, terminated with micro-B at one end, for US$99.