Putting together a hi-fi system to one’s satisfaction can be a journey of seemingly never-ending steps, progression along which isn’t always linear. There are diversions and forks in the road to be taken. Some lead to dead ends, some don’t.

It takes real world experience to discover whether or not a new amplifier or DAC will advance a system to the listener’s liking. To sit and pontificate about a specification sheet, internal photographs or a white paper will only get us so far. Sooner or later we must take ourselves beyond armchair audiophillia and make time to plug stuff in, listen and evaluate. This isn’t just the MO of reviewers; it’s played out each time an audiophile earmarks a new component for consideration.

After choosing loudspeakers, an amplifier and source, attention turns to cables. How much to spend and on what? An oft-cited rule of thumb suggests that at least ten percent of our total system budget should be reserved for loudspeaker cable and interconnects.

Of course, some corners of the Internet will claim this to be wasted cash and that all wire sounds the same. Loud and frequent talk of cables will sound the alarm of the double-blind brigade. They’ll crawl onto message boards and comments sections for a game called ‘prove it’, often placing the burden anywhere but their own responsibility to go listen for themselves.

Thankfully, many audiophiles know that first-hand experience trumps conjecture. Hauling ass from chair to hi-fi rack to plug in alternative signal wire can – and does – solicit minor improvements. String enough of those minor improvements together and you have something substantial.

If you’ve spent a thousand bucks on a DAC, the same on an integrated amplifier and double that again on loudspeakers, you’re already in for close to four grand. Hardly chump change. Once speaker wire and interconnects have been bought power cables often seem like a bridge too far, especially to the newcomer. 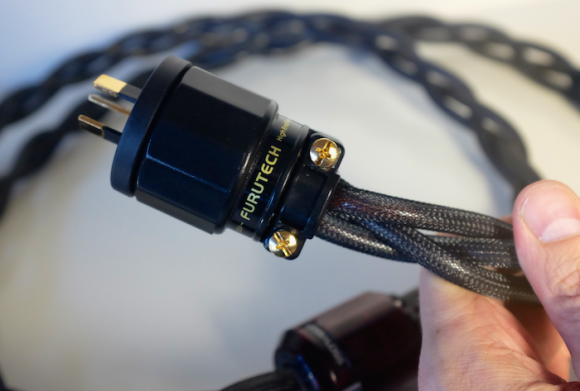 I had newbies in mind when I reviewed the Morrow MAP1 power cable (US$159) this time last year. I found it made a noticeably small difference to most components to which it was applied. That experience represented a fork in the review road for yours truly. A fork from which I’m not returning. I’m now open to occasionally committing first hand experience of power cable amelioration to pixels on these pages.

This year I pushed further down the power cable path in taking the DFPC Original from LessLoss for a plug-n-play. The DFPC Original is the cheapest in a series of three variations that include Signature and Reference editions. At US$595 for up to 2 meters, the DFPC Original is more expensive than the Morrow MAP1 but it’s also a better cable in both construction and sound.

Let me explain why.

The DFPC Original’s three-way braid brings flexibility and – according to LessLoss’s mainmain Louis Motek – a promise of none of the harsh sound often attributed to multi-strand mains wire. Motek sources IEC connectors from Oyaide in Japan. Ditto power plugs (except for Australia and the UK terminations where Furutech connectors play substitute). The DFPC Original’s physical features ensure that aesthetics keep pace with its higher asking price. 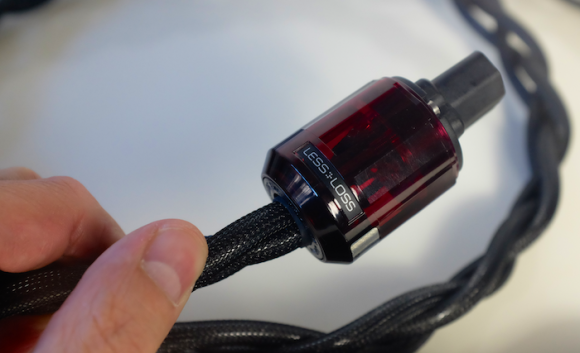 But that’s not all.

Mains power quality can be an issue for (some) audiophiles. What to do with all the noise being piped into our homes by electricity companies? They don’t care for audiophiles, only that they deliver the correct voltage at the right frequency. Power line noise doesn’t affect your vacuum cleaner or toaster but it will have a detrimental effect on your audio equipment: hello distortion.

Then there’s the noise added to the mains by the end user. Yes, that’s you! Switch-mode power supplies often push nasties back into the home circuit…which can end up being fed back into one’s electronics.

Moreover, city living means our listening environments are drenched in high-frequency signals for which power cables act as antennae, picking up the high-frequency detritus that moves around us and feeding it into noise-sensitive audio equipment. This problem can still exist even after filter boxes and regenerators have been applied. 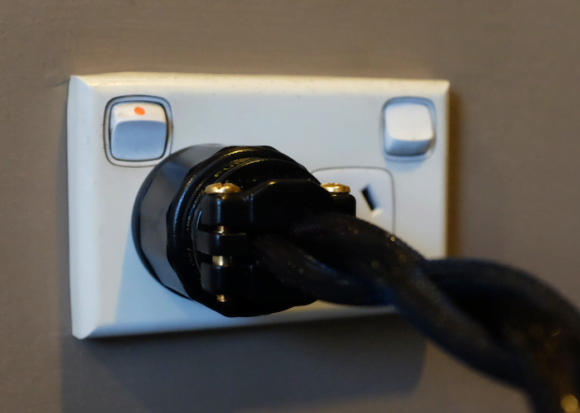 Noise is made up of undesirable high frequencies. The higher the frequency the closer to the outer-most skin of the conductor it will travel. This is called the skin effect.

Motek has harnessed this skin effect to his advantage by turning the outer part of the conductor into a resistor in order to attenuate those troublesome high frequencies. A porous skin on the DFPC’s copper conductor applies high resistance to noise travel. 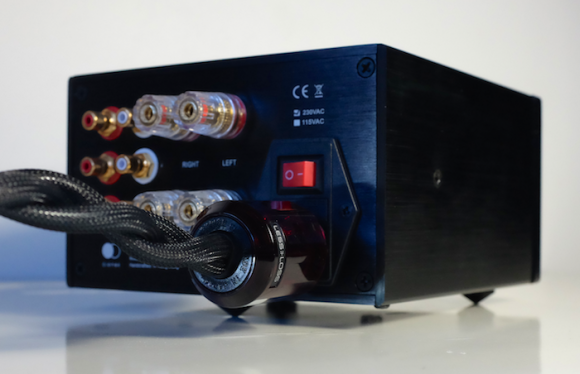 Diving straight in after burn-in, I added a DFPC Original to the Clones Audio 25i integrated (reviewed here). Up went tonal colour, down went lower-treble glare. Radiohead’s “Jigsaw Falling Into Place” wasn’t as edgy or as mean. The Lessloss cable also introduced greater depth separation.

However, by far the most noticeable improvement was more obvious – and better – bass. Or rather, greater prominence of acoustic mass across the board was more readily apparent in the lower frequencies. The DFPC lifted the skirt on Modeselektor to reveal a fat-bottom girl. Baby got back! Double-checking with the REDGUM RGi60 showed this was no fluke result. Behind Mr Speakers Alpha Dog headphones and applying the DFPC Original to the Schiit Asgard amplifier this enhanced robustness was not as conspicuous.

A second DFPC was then applied to the Resonessence Labs INVICTA Mirus (reviewed here). Here the after-market cables blew the dust from surfaces to better reveal textures up and down the frequency spectrum. Bass didn’t get bigger but more mass and density better secured music’s foundations – a lower centre of gravity was now at play.

What else? Beck’s acoustic guitar on Morning Phase took a chill pill, now rendered a touch smoother it was now even more of a delight; string-plucked transients weren’t as overtly strident. I’m talking about small changes that were readily reproducible when switching cables back and forth several times during the review period. 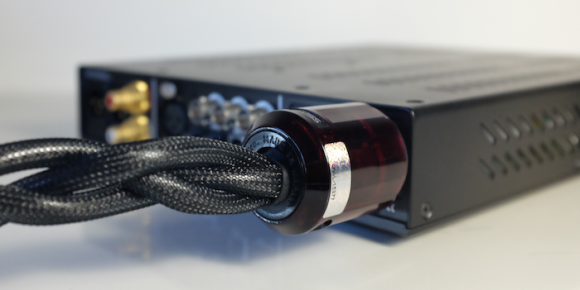 Completing the system overhaul a third (and final) DFPC power cable went rearward into the Antipodes DS music server (reviewed here). This was by far the least conclusive of the three. I think I might have maybe perhaps noted a possible slight uptick in micro dynamics but it’s not something I’d put money on. With close attention already paid to noise suppression/elimination from Antipodes’ bespoke internal power boards, I suspect Mark Jenkins already had most of this covered. Other music servers might not be so fortunate.

Upon reversing the procedure, the DFPC cables were removed from the system one by one in reverse order. On results alone the music server amelioration I could easily live without. On removal of doubt and for the sake of completeness, it stays. However, switching power cables from LessLoss back to vanilla on DAC and amplifier took music several steps backward to something a little more tepid, less micro-dynamically interesting and thinner. 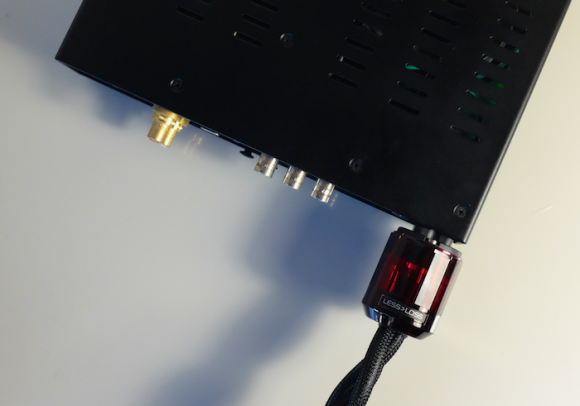 Guilty until proven innocent. First hand experience with the LessLoss DFPC cables swiftly erases the healthy skepticism with which I greeted this assignment. The magnitude by which these power cables collectively lift system performance has me reassessing the notion that money should first drop on interconnects and loudspeaker cable. Perhaps source first is the way to go. Well played, Louis.

The so-called subjective/objective divide is one o

A new #DarkoAudio podcast episode is now up on Sou

Friday is news day. On the website and on the YouT

Proving that *anyone* can lay claim to the truth o

This week's coffee beans come from #ColOmbia via @

Something a little different is brewing in Olaf's

New video now up on the YouTube channel. 🤓 #Dar

A BIG thank you to all members of the Darko.Audio

Android or iPhone for high-quality audio? (Some) a

Spotify is soon to launch a 'hifi' lossless CD-qua

You can find out more about which cookies we are using or switch them off in settings.

This website uses cookies so that we can provide you with the best user experience possible. Cookie information is stored in your browser and performs functions such as recognising you when you return to our website and helping our team to understand which sections of the website you find most interesting and useful.

Strictly Necessary Cookie should be enabled at all times so that we can save your preferences for cookie settings.

If you disable this cookie, we will not be able to save your preferences. This means that every time you visit this website you will need to enable or disable cookies again.