High, in your face. When Qobuz Hi-Fi streaming is handled by a smartphone with in-app offline listening cache the need to own lossless content is eroded. Money previously spent on download purchases can be re-directed into the subscription service itself and better playback hardware. Adding a portable amplifier/DAC to a smartphone lifts its sonic performance whilst keeping streaming services like Spotify, Qobuz and Pandora in the ring. Existing music collections – whether accessed from the cloud or stashed on the device itself – can enjoy equal levels of amelioration.

Balking at the bulk. There’s no refuting it: many of the headphone amplifiers coming to market add serious bulk to portable rigs. I’m looking at you Cypher Labs, ALO, CEntrance/Glove, Lehmann et al. That’s the price you pay – or the compromise you make – when lifting your smartphone’s (or DAP’s) all-round audio game. Some listeners are down with said compromise…and some aren’t.

If you fall into the latter camp then you might have begun to spy the number of dongle DACs coming to market and wondering if they can somehow be sonically grafted to a smartphone or tablet? Good news: they can! Well, some can. It’s often a game of first hand trial-and-error to find out which fall dumb with Android or solicit the dreaded ‘too much power’ pop-up on iOS. 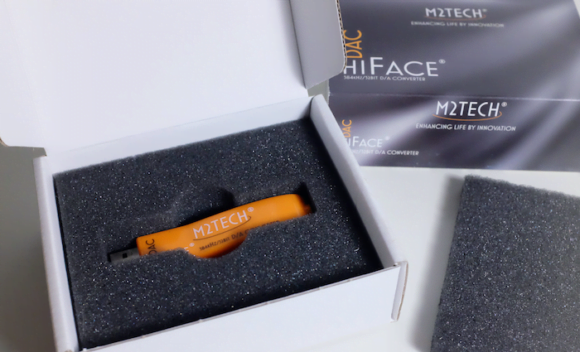 I’ve had considerably more success with the comparative uniformity of iOS-equipped hardware. Android devices are currently too inconsistent in their ability to push digital audio from their micro-USB port. A standard Samsung Galaxy S3 plays nice in this regard, a Google Nexus 5 doesn’t. Cyanogenmodding the latter allowed binary data to flow from Nexus to ALO International+ (review soon) but not the Cypher Labs Theorem 720 DAC.

For this article we’re biting into Apples.

Down under an iPhone 5S (16Gb) sells for AU$850 whilst an iPod Touch (16Gb) is a far more agreeable AU$250. Foregoing the phone functionality of an iPhone nets you a saving of $600. The 5th generation iPod Touch is a terrific bargain providing an inexpensive playground from which to experiment with dingus DAC compatibility. Required to bridge the hardware gap between USB DAC and DAP is Apple’s Lightning-to-USB adapter (AU$39). 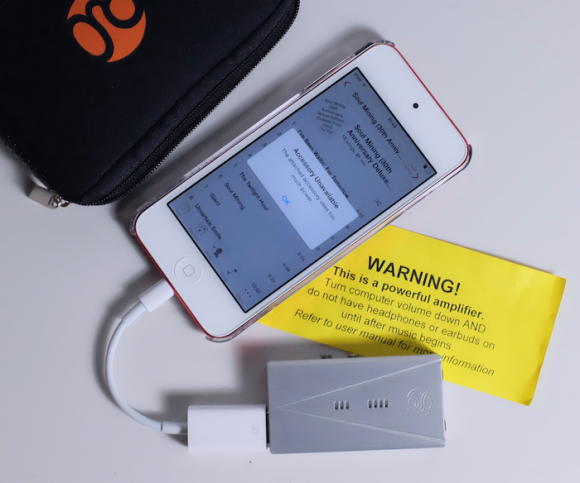 LH Labs’ GeekOut 1000 DAC ships with the yellow carded warning of its seriousness with power-mongering. Owners of the 1 watt version will likely attest to the heat emitted via the GeekOut’s metal body whilst in use. Plugging it into a 5th generation iPod Touch via a Lightning-to-USB adapter sees a red card held aloft: “The connected USB device requires too much power.” Game over, back to Mac.

With m2Tech recently appointing a new Australian distributor I was reminded to take a fresh look at Marco Manunta’s entry-level products. It was almost two years since I first deployed the MKII hiFace as USB converter for the Squeezebox Touch.

The hiFace DAC (AU$350) stepped forward as a possibility for appending to the iPod Touch: it’s similar in size to the Audioquest Dragonfly, packing a 3.5mm output socket as its sole output. Inside, asynchronous XMOS USB silicon hands off to a Burr Brown PCM5102 chip for a PCM decoding ceiling of 32bit/384kHz. A shame that the iPod itself won’t parse anything higher than 16bit/48kHz but for lossless Qobuz and lossy Spotify streaming it’s not an  issue.

The good news is that the hiFace DAC is a definite go with the 5th generation iPod Touch. A digital audio stream flowed from Qobuz over the Lightning-to-USB adapter and into the little orange stick that handles D/A conversion. Its output voltage is 2 VRMS, twice that of the iPod Touch so you’d expect the hiFace to present as the louder of the two. And when directly fed into a REDGUM Black Series RGi35 driving Magnepan MMG it does. The hiFace’s sound edges out the Touch with superior all-round refinement and the delicate handling of textural information over which the Apple device can ride a little rough shod in trying to communicated music’s urgency. I also dug the hiFace’s more elegant carriage of finesse in this particular two-channel setup. 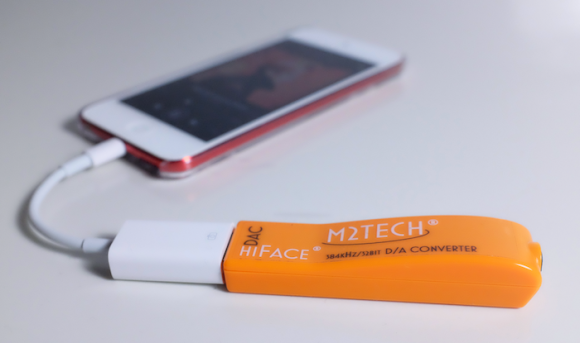 However, this result (almost) turned about face when removing the Zu Audio 3.5mm-to-twin-RCA cable and inserting a pair of KEF M500. When feeding headphones the iPod Touch comes on as the louder, more rambunctious interpreter of events. The hiFace + KEF M500 reached satisfactory SPLs at around 80% of the iPod’s volume range, at least 20% more than the Touch’s own headphone output. Maxing the volume on the hiFace-equipped iPod proved to be too loud for my usual M500 tastes but the SPLs were a long way from being painful. This is good news should you accidentally nudge the in-app volume slider too far. The hiFace’s sound was smoother across the mid-range than the Touch’s own output as well as being less strident in the lower treble. That said, the Apple device made a much better fist of driving DITA Audio IEMs than the m2Tech dongle (with which they were all boom and tizz). This can most likely be attributed to the 5th Gen iPod Touch’s lower output impedance.

Ken Rockwell has measured the iPod Touch’s own output impedance at a highly respectable 1.4 Ohms whilst the hiFace DAC clocks up a whopping 470 Ohms. To provide proper context, both the original Audioquest Dragonfly and HRT microStreamer have output impedances of less than one Ohm and can therefore drive a broader range of headphones.

Low impedance ‘phones are vulnerable to unwanted frequency response anomalies when fed from a device that measures high on output impedance. I recommend readers tuck into John Atkinson’s superb explanation of how even the Astell&Kern AK100’s (initial) output impedance of 22 Ohms affected the audible outcome of several low-impedance headphones. 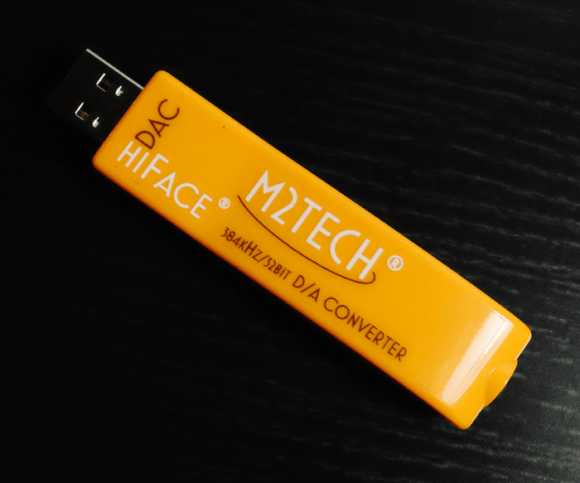 “10.4. Driving headphones – the hiFace DAC has been conceived as a line out DAC to drive amplifiers’ line input at highest [sic] sound quality possible. No headphones amplifier has been placed in the signal path, to avoid signal detriment due to the power stage made to operate at low voltages. This allows for a sound quality that’s unmatched by competitors. On the other hand, the hiFace DAC line output is capable of driving most medium- and high-impedance headphones. Of course, sound quality is heavily dependent on the headphone impedance curve (reactance) and sensitivity.”

The upshot? m2Tech didn’t intend the hiFace to double as headphone amplifier. It’s best seen as a DAC that might satisfactorily drive some headphones. Prospective buyers in the head-fi field are strongly urged to snag an apriori audition before committing. If you find copacetic match between your own ‘phones and the HiFcae know that whilst the hiFace DAC isn’t as tonally meaty or as beefy in the bass as the Cypher Labs Theorem it doesn’t suffer the latter’s circuit hiss with IEMs. 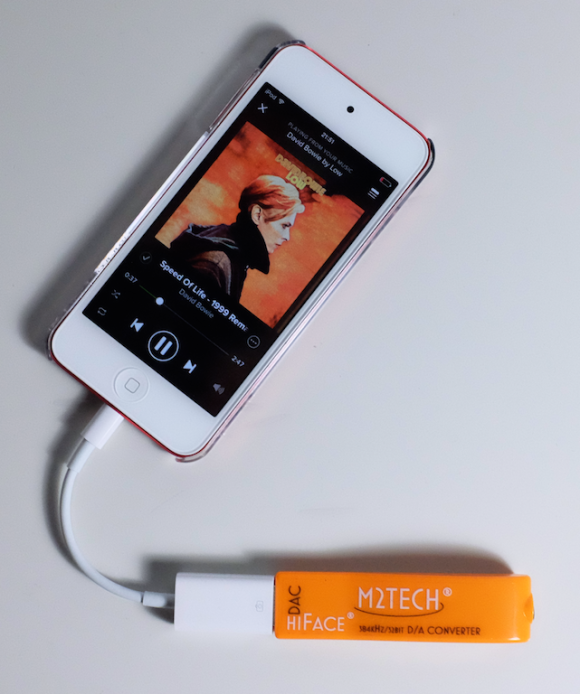 I’m calling out the hiface DAC as a better match (over the Cypher Labs gold brick) for two-channel rigs, particularly those in need of a bit of pep and pepper. It’s a natty, wallet-friendly way of extracting better audio quality from an iDevice when feeding an amplifier or active loudspeakers. And it’s small. And it’s lightweight.

Whilst the hiFace DAC is also compatible with computers running OS X or Windows, desktop-sourced digital audio isn’t my focus here. Android and iOS devices should no longer be seen as making large only with convenience. With Qobuz Hi-Fi installed and paid for (AU$30 per month) an iDevice’s ability to connect listeners with ENORMOUS lossless Redbook libraries is not to be underestimated.

For many mainstreamers their smartphone or tablet is their only audio playback device. What more elegant way to convince them of the value of better sound quality by showing them an AU$350 drop-in addendum to their existing iPhone/iPad with which they can improve the quality of Spotify or Pandora or – best of all – Qobuz Hi-Fi?