If hi-fi were to have a Facebook profile its relationship status would read “It’s complicated”. To incoming digital audio dudes, the plethora of DAC-amplifier combinations must look overwhelming. If you’re a wannabe vinyl spinner as well, the paradox of choice doubles again in choosing turntable and phonostage. Then there are interconnects to consider, both digital and analogue. The you have to hook the whole shebang together and keep the cables hidden from view.

Scott McGowan, sales manager of PS Audio (and son of founder Paul McGowan) believes the complexity of choice combined with the need for technical understanding on how hi-fi components all hook together provides a significant barrier to entry.

For the past year or so, McGowan Junior has been hard at work trying to better meet the needs of the newcomer. McGowan believes entry-level products shouldn’t be complicated. It’s this thinking that has given birth to the PS Audio Sprout (US$799).

The Father-Son combination proved a potent combination in complementing the Sprout’s debut at the Munich Hi-end show in May. Several prototype units adorned the exterior of PS Audio’s lot whilst DirectStream auditions took place inside their prefabricated demo room.

This week sees the hard launch of the Sprout via an a la mode Kickstarter campaign; a crowdfunding solution to meet its funding target within the first few hours of going live, largely due to Paul McGowan announcing via his daily blog that one hundred half-price units would be made available from the get go. Don’t fret though – at time of writing you can still snag one for US$449.

So – what the hell is it? The Sprout is an integrated amplifier with in-built USB and coaxial DAC [24/192], aptX Bluetooth streaming and phono stage. There’s an analogue input too.

Close attention has been paid to aesthetics. Much like the guys at Peachtree Audio, Scott McGowan thinks most black box solutions look butt ugly. The Sprout’s casework – a combination of steel, aluminium and walnut – is clearly aimed at the IKEA set. More curiously, McGowan refers to the Sprout as “audio furniture” but I don’t imagine it’d be too comfortable to sit on. I guess it’d make a neat drinks coaster.

To these eyes, it’s better looking than its nearest competitor, the NAD D 3020 (US$499). That said, the NAD unit trades in on the phono stage for a toslink (optical) input so if you want to hook the digital audio from your LCD TV, Apple TV or Playstation into the Sprout you’ll need a tosklink-to-coaxial converter – an easy $15 from Amazon.com. For the NAD you’ll need something like the new Schiit Mani (US$129) to make with the vinyl. With the Sprout you won’t – an MM phono stage comes built in. The NAD counter attacks with a remote control. The Sprout hits back with 1/4 inch headphone socket.

I can personally attest to the Sprout’s ability to drive more challenging headphone loads. It had precisley zero trouble with the Audeze LCD-2 when I took some Bluetooth tunes for a run with a Google Nexus 5 whilst in Munich. Greater sonic satisfaction awaits those with aptX capable devices. Its loudspeaker outputs I’ve not heard but they’re rated at 50wpc into 4 Ohms* – that has the Sprout positively screaming for the Andrew Jones-designed Pioneer BS-SP22-LR, available Stateside for less than a hundred clams.

Roll in an entry-level table from Pro-ject and you’re done and dusted with an attractive, fully featured analogue- and digital-audio rig for less than $1500. Crucially, putting this together is easy. And audiophile land needs more easy. MUCH MORE.

Remember how I suggested that mainstreamers should get better gear before going Pono? THIS IS IT.

(*Power rating into 8 Ohms has yet to be formally specified).

UPDATE 20th June. PS Audio’s PR dude Bill Leebens says, “By popular demand–much of it from down under– the campaign has been opened up internationally!”… 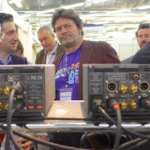 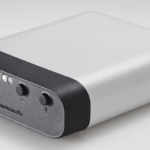