The big three. Computer audiophiles using Mac OS X will likely be familiar with the Channel D’s Pure Music, Sonic Studio’s Amarra and Audirvana+ – all alternatives to iTunes’ own playback engine. They each retain iTunes’ library management system but at the click of play digital audio is handed off to the third party player where lower system overheads and RAM pre-loading solicit an uptick in sound quality. Spend a few hours with any of these applications and you’ll find returning to iTunes running solo a most unsatisfactory listening experience: it will likely sound flat and lifeless in comparison. Whether it’s been a showroom demo or a home audition not once have I been unimpressed with the amelioration brought by each of these pieces of software.

In 2014, we no longer consider only locally hosted libraries, accessed via an iTunes database. With Qobuz and WiMP lossless streaming services up and running we now look to the cloud as a source of music. Renting access to CD-quality music is big news. Spotify sates more (theoretical) casual listening via 320kbps Ogg Vorbis but it too can still sound downright impressive. Time to remind ourselves that the mastering quality is as (if not more) important than the delivery format.

I recently detailed several ways in which to connect better software playback engines with Spotify and Qobuz. That coverage was somewhat Windows-centric with the final mention going to the forthcoming Amarra SQ, software that promises OS X users an audible improvement with ANY music application, not just iTunes. Ahead of its release I thought I’d take a closer look at its main competitor: Channel D’s PureMusic (US$129). I took the 15 day trial versions of 2.0.1 and 2.0.2 for a spin.

Bundled inside the main app is the DPad plug-in which installs a virtual output device on your Mac through which any audio can be routed and – therefore – improved. DPad can also intercept audio played back from the web browser – hello Pandora radio. 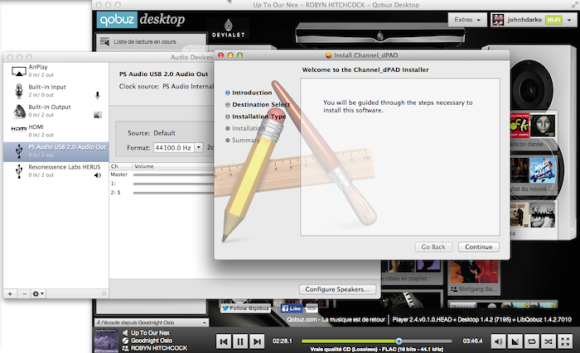 DPad must be installed from within PureMusic’s audio setup options panel. Inside Playthrough’s software settings a hardware DAC can be specified. PureMusic must be restarted to apply any such changes. This brings us to my first niggle: decoupling PureMusic and iTunes just isn’t possible. The former launches the latter and you can expect to iTunes to remind you of its presence each time PureMusic starts up as well as each time it quits. This kinda bugs me but it isn’t a deal breaker. More troubling was PureMusic’s tendency to crash on exit upon which freshly applied settings were lost.

An email to PureMusic’s tech support team on 14th June received no reply.

Selecting Channel D DPad as the default output device in OS X’s system preferences and then engaging ‘Audio Playthrough’ (from PureMusic’s MusicServer drop down menu) is simple enough; signal metering shows the user when PureMusic is handling playback processing. With Pandora playing inside Google Chrome, A/B-ing between PM Playthrough and direct-to-DAC in OS X’s sound output device selection menu becomes a single-click affair. PureMusic definitely brings something to the party but with my headphone rig – LHLabs GeekOut firing into Audeze’s LCD-X – the gift is small. DPad routed audio is a smidge smoother, a soupçon softer…but that’s all she wrote. 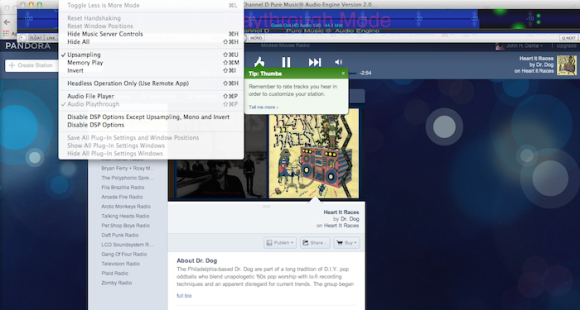 Without the ability to specify an audio output device from within Spotify’s desktop app it fires ones and zeroes at whichever hardware device is specified in OS X’s system preferences. Simple enough for everyday users but for power users looking to introduce third party engines like PureMusic’s DPad it comes up short. No way to tell Spotify that it’s gotta talk to DPad first. Instead, PureMusic hijacks the audio feed as per Pandora’s web browser audio stream. Investigating what PureMusic could do to lift Plastikman’s EX – which already sounds mighty fine in lossy format – was a short-lived affair. Engaging PureMusic Audio Playthrough introduced an occasional stream of glitching sounds to enter the playback chain of MacMini, Resonessence Labs Herus, REDGUM RGi60 and Zu Soul MKII. Disengaging Audio Playthrough was the only way to return to something listenable. Thinking the 2010 MacMini w/ 10.9.3 might not be powerful for the task I took to a 2011 MacBook Air w/ 10.9.3 only to be met with the same outcome. Imagine vinyl’s surface noise run through an IDM glitch plugin. Perhaps an even more powerful Mac was required? Without one to hand I’ll never know.

An email to PureMusic’s software support service on 16th June was returned to sender marked ‘undeliverable’.

Qobuz Hifi. Lossless streaming straight from France (or wherever their servers are located). Putting aside the discussions about artist remuneration for one monent, if anything’s going to kick CD sales into a distant niche it’s streaming services likes this: Redbook FLAC beamed straight to your desktop or smartphone for 20 Euros per month. You don’t own music, you rent access to a library of millions of songs. No, they don’t have everything imaginable. A search for Robyn Hitchcock turned up only four albums, of which only was available to my ‘UK’ region. With Australia not yet on the list of countries officially serviced by Qobuz, I’ve taken to what many an Australian does with Netflix: a $6/month subscription to the Unblock-us VPN service. A promo code provided by the Qobuz marketing team at the Munich High-end show kicked open the doors to a one month trial of their lossless streaming service.

The Qobuz desktop application had me digging back twenty years for school-learned French but I think most people would pick “Préférences” as preferences. From there we’re able to access a drop down list of possible audio devices. In comes another gotcha! On the fly switching doesn’t work; a Qobuz app restart is required to engage a different device. 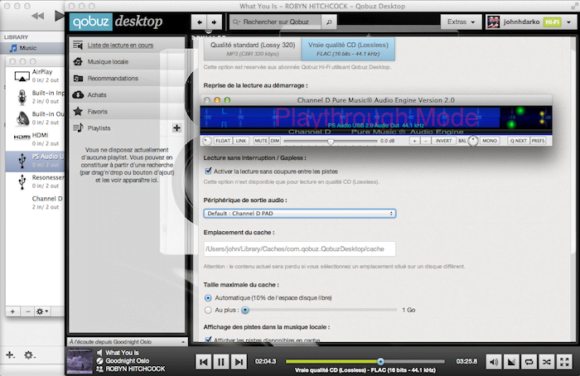 After an hour or so of further futzing around, I discovered that Qobuz’s desktop app will output to whichever device it sees selected in OS X’s system preferences upon its launch. To hear a straight take via Resonessence Labs’ Herus requires explicit user selection of said device in the operating system’s sound options panel. For PureMusic to do its thing, Channel D PAD requires nomination as the system sound device. Only then will Qobuz’s audio be routed via the Channel D playback engine and onto whichever device is called out in PureMusic’s audio settings. Confused? You will be! Another time-consuming trial and error session revealed that one must launch PureMusic before firing up Qobuz, after which Audio Playthrough is easily engaged from the ‘MusicServer’ dropdown. If in doubt, look for the tick of confirmation. I needed to disengage and engage a second time to banish the “Ready…Select Track and press Play” scrolling marquee from PureMusic’s elongated floating window.

What does Qobuz + PureMusic sound like? The short answer is: I’ve no idea. On both Apple Macs I encountered the same glitched-static discharge as with Spotify playback. Bummer. Switching from the Herus to the PS Audio Direct Stream DAC didn’t help. Neither did checking the box that hands over volume control to the hardware. No dice when enabling ‘Hog mode’ either. The lesson learnt? Not all reviews end on happy terms – some are are a stumble followed by a fall. For this user, on this day, with this equipment, PureMusic 2.0.2’s Playthrough is a miss. 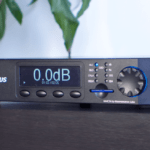 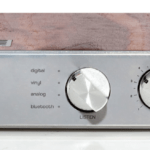