Born in the USA. Freshly-minted President of VPI Industries, Mat Weisfeld is a grinning chatterbox, a suitably appropriate – albeit temporary – remedy for this traveller’s ongoing tussle with jet-lag. If there’s a manufacturer with a sunnier outlook on the hi-fi industry, I’ve not met him.

Over the past couple of weeks I’ve bounced from Tokyo to Munich to Paris to New York, visiting hi-fi shows and and record stores along the way. Ordinarily, I’d be obliged to wait until I touched down in Sydney before giving those new records a spin.

However, upon arriving on VPI’s home turf of New Jersey, Young Weisfeld has other ideas. He’s tossed a VPI Nomad turntable onto the back seat of his car so that I might tuck into a few of my fresh purchases during my stay.

Yes, that’s right: I’ve been listening to vinyl in a hotel room. That in itself is quite special. 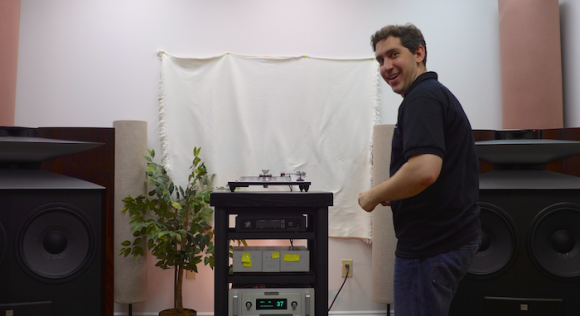 VPI Industries infuses its product names with family connections. The Aries got its monicker from Weisfeld Jr.’s star sign. The Traveler was so named after the late Sheila Weisfeld’s (Mat’s Mom) passion for going places and the Nomad had a working title of Camper on account of her being a girl scout.

All VPI turntables are made in the USA and the Nomad is VPI’s cheapest to date – it sells for an RRP of US$995. However, it’s a spinner that comes with a twist: phono stage and headphone amplifier are built right into the plinth. You plonk it down, plug it in and you’re off to the races. One SMPS power brick, BYO headphones. Beginner turntablism could not be simpler.

The bundling of budget Grado headphones was ditched soon after the first prototype came into being. Those cost savings were then ploughed right back into the Nomad’s iterative development. Commenting on the not insignificant changes to the Traveler that took place during its first year on the market Weisfeld said, “We wanted to get the Nomad right from the get go so we’ve taken a little more time with the design process, production and getting it into stores”. Two hundred units are about to head out into the wild with thousands more slated for manufacturer as the year progresses. 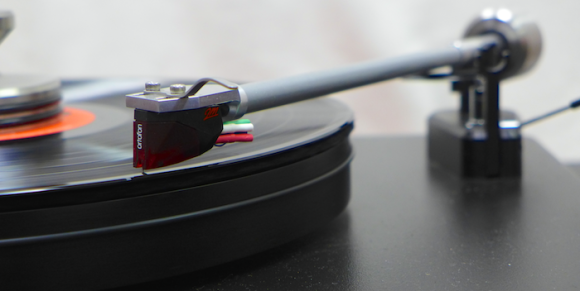 Let’s get down to some finer details. The tonearm on the Nomad is a 10″ gimbaled yoke – similar to that found on the Traveler…almost. The Traveler tonearm has four bearings whereas the Nomad features only one that’s then bolstered by a stainless steel pin for greater durability. “That’s crucial when selling to newcomers”, continues a talkative Weisfeld. “We wanted it to be tough enough to cope with some carelessness on the part of the user.”

Music ultimately sees daylight via one of two outputs: 1) a 1/8″ headphone socket found next to the power switch on the bottom left of the plinth; or 2) twin line-level RCAs on the rear. The latter makes it an ideal match for modern day integrated amplifiers that forego in-built phono stages. And even if you own something like a Brio-R, will the Rega’s internal phono pre-amp have been precisely tailored to the Ortofon 2M Red cartridge? No it will not.

That said, it’s probably obvious by now that this isn’t a table for super-serious audiophiles. It’s for newbies or those looking for a (second) go-anywhere setup. Weisfeld tells me that the Nomad has been voiced for a richer, warmer sound that will appeal more directly to youngsters’ collective expectations of the ‘vinyl sound’. It also keeps pace with the VPI ethos of extending the user some upgrade options. The HRX centre weight (US$150) and Scout feet ($poa) are available to those who want to make this entry-level turntable the best that it can be.

‘Warm’ is how I heard the Nomad when comparing the vinyl of Plaid’s Reachy Prints to a lossless digital download of the same on an Astell&Kern AK120. The little grey turntable’s sound is present but laid back – ideal for long listening sessions. The VPI rig offered up a more congealed version of events than the rivalling DAP but I also noted considerably fatter tonal mass on the Nomad, especially in the mid-bass (which is no doubt pivotal to its warmer vibe). The VPI turntable sailed past the AK120 when it came to low-end impact.

On separation and detail retrieval the Nomad isn’t as accomplished as a Scout 1.1 (US$2000) partnered with a PS Audio NuWave Phono Converter (US$2000) but it’s only a quarter of their combined sticker. The portable VPI dispenses with the need for an interconnect between ‘table and phono pre-amplifier and then goes one better by keeping the tonearm’s micro-volt signals routed along the circuits of its internal board. Inherent to its design, users reap the benefit of shorter signal paths.

Back at VPI HQ, former President (and Mat’s Father) Harry Weisfeld expands on the headphone amplifier circuit design: “We’re running the headphone amplifier’s power supply unregulated. It won’t measure as well as amplifiers that are tightly locked down but we chose to run ours fully open for more juice.”. Headphones used during my hotel room listening sessions were the portable-friendly Sony MDR-1R MK2 for which a turn of twenty percent on the Nomad’s rotary was all that was required to get happy with SPLs. This suggests plenty of headroom for more demanding ‘phones. 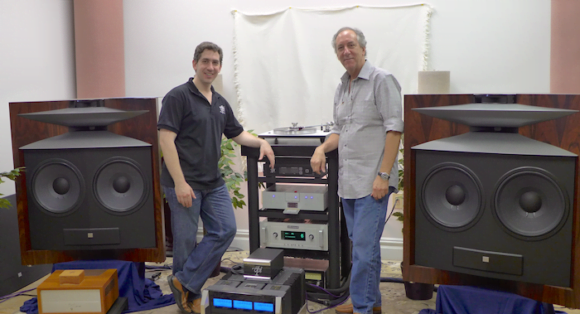 VPI’s listening room reprised the setup at Tokyo’s Dynamic Audio: JBL Everest power by McIntosh amplification. Here I pitted the Nomad against its closest rival in their range, the Traveler (US$1499). With phono-preamplification an inside job, the Nomad’s output completely bypassed the $15k DSA phono stage used with the Traveler thus stacking the odds firmly in the latter ‘table’s favour. Not a fair fight at all. Still, the little Nomad held its own with a polite, soft and warm signature. Not bad. Not bad at all.

And there’s rub: comparisons to the Nomad aren’t easy. Even if you could bundle a Schiit Vali (US$119) and NAD PP4 9 (US$199) in with a Pro-ject Debut Carbon (US$399) or Rega RP-1 (US$445) you’d still be faced with three units, three power supplies and the bill for two pairs of interconnects. Not only that, but the phono stage wouldn’t be suited and booted preciself to fit your cartridge of choice. As Weisfeld Sr. says of the Nomad, “It’s unique!”. Damn straight it is – I want one. If it weren’t slightly too big for carry on luggage, I’d be hauling one back to Sydney next week.