In/out. I sometimes like to categorise headphones as ‘indoor’ and/or ‘outdoor’ models. For use on the commuter run, headphones must leak little-to-no sound; this instantly precludes open-backed models like the Sennheiser HD800 and AKG K-701/2. And that’s even before we address their thirst for proper power. A smartphone-agreeable impedance and sensitivity is a modern day advantage, particularly for on-the-go Spotify playback. Thankfully, there is an increasing number of closed-back, portable-centric ‘phones spilling onto the market, the poster boy for this category explosion being the Sennheiser Momentum. 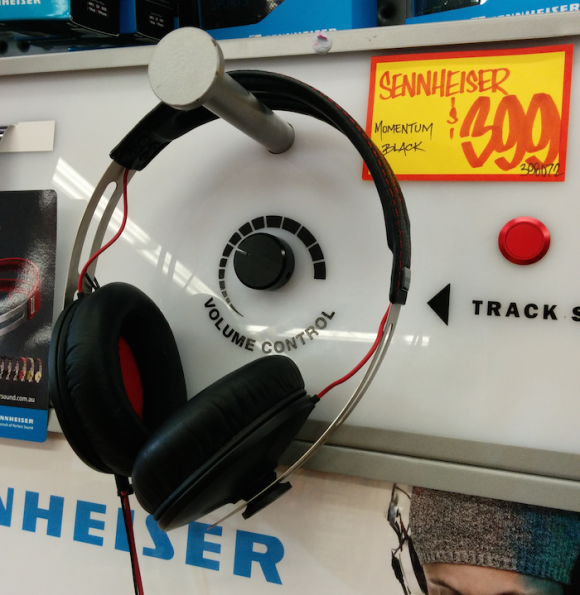 ‘Indoor’ units don’t suffer these restrictions. With wall-powered amplifiers easily added to the mix the serious money tends to drop on brands like Audeze and Abyss. Keeping things in and around $350 whilst locating challengers to the ubiquitous Sennheiser Momentum and the V-Moda Crossfade M-100 was the self-imposed remit for this review.

My love for V-Moda’s Crossfade M-100 (US$300) has been well documented on these pages but the introduction of fresher fones from rival brands – as we shall see – is already beginning to blunt their competitive edge. In this article I’ll cover three headphones that might not match the V-Moda for their collapsible, near-indestructible build quality but instead offer something better in terms of outright sound quality for similar money. See this as not a detailed drill down but more of a broad overview.

In reverse order of preference… 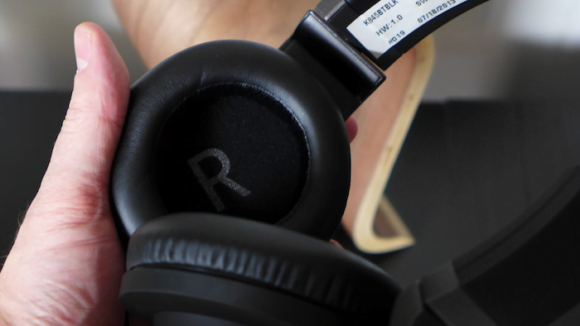 The AKG K845BT is a closed-back, Bluetooth-capable headphone. At first blush the Bluetooth option made me wince with wariness…but stick with them because once you get past the (somewhat temperamental) wireless connectivity and hardwire them directly into your smartphone – or DAP – their sonic talents become readily apparent. Rechargeable Bluetooth/NFC and 32 Ohm wired impedance means they’re a shoe-in for ‘outdoor’ assignation; I had no issue initiating the K845BT’s Bluetooth pairing with a Google Nexus 5. However, after dropping the Nexus 5 into a front jeans pocket, the connection between smartphone and headphone began to st-st-stutter. Oh d-d-dear. Salting the wound, there’s no aptX on offer so be prepared to take a sound quality hit even if you have better Bluetooth luck than I. Go with direct wire (supplied) and the K845BT sound MUCH better.

Fit and comfort are stellar. The AKG don’t clamp the head as firmly as the V-Moda Crossfade M-100 and their larger earcups swivel through ninety degrees, making it a cinch to effect a good seal around the ear. The K845BT are also lighter which means they’re not as physically intrusive as the Crossfade M-100 — that’s always a good thing. 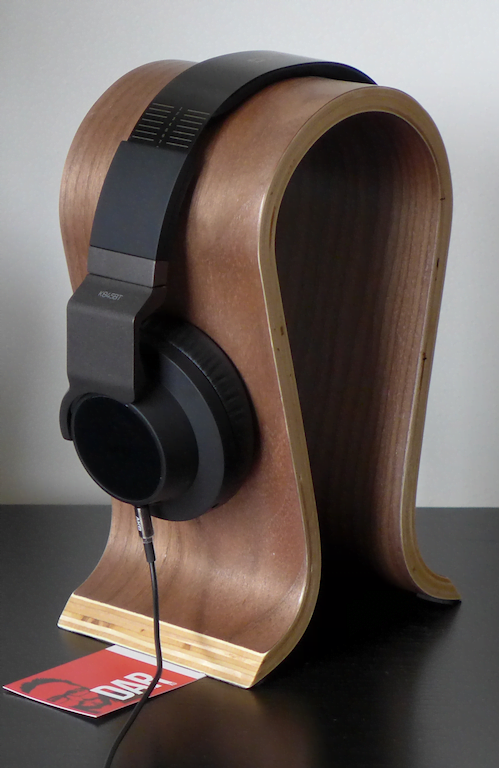 My previous experiences with AKG headphones haven’t always been favourable. The K550/1 were often too lean and bright for angular guitar rock like Television, Thin White Rope or Franz Ferdinand – the top end was just a little too insistent. That’s how I also heard it with the K701/2. Thankfully, there’s no sign of this dry etch with the K845BT. The 50 mm driver is the same size as per the K550 but AKG have dialled back the upper frequency urgency so that the treble is as smooth as it is prominent; it’s present without drawing as much attention to itself. If you enjoy tracking a band’s rhythm section via the hi-hats and cymbals, these might well be your kind of headphone. Ditto if you get off on an airy presentation that’s as good at communicating the recording space as the music itself.

I also noted a keener ear for textural information and its attendant decay: the pluck of a guitar string or the shimmer of a cymbal. If you want kick-ass heft in the low-end, you’re out of luck. Go for the aforementioned V-Moda. That’s not to say the K845BT don’t go deep (they do) but these AKG aren’t as overtly bombastic or as manifestly coloured (read: fun) as the V-Moda. Neither do they sound as closed in. AKG bass notes are well-defined and nimble but lower on overall impact. With less of an ‘inside yr head’ presentation, the AKG K845BT’s voicing is more likely to please furrowed-brow audiophiles than those looking for macro-dynamic largesse. I’d say the AKG were more transparent with the oft-intricate delicacies of rock n roll, especially in the midrange, but they can’t quite match the V-Moda’s ability to render electronic music a visceral listening experience. Presenting as more cerebral than physical, the AKG K845BT run in the opposite direction to the Crossfade M-100’s cruder, more overtly entertaining disposition.

With their Viso HP50, NAD go one better than the AKG in pushing illusory headstaging further outside of the listener’s noggin. NAD’s marketing men call it “Room Feel”; it’s the same tech as found in PSB’s M4U1/2 and yes, the HP50 have also been voiced by PSB’s chief designer Paul Barton. Them’s the benefits of having NAD and PSB Lenbrook-grouped under one roof. The design mandate behind the HP50’s voicing was to take the headphone experience closer to that of listening to loudspeakers in a room. I’d say that NAD have thwacked the ball into the bleechers in this respect. If you’re a newcomer to the land of head-fi and find yourself immune to the charms of the inner-cranial soundstaging of many, more expensive models, you might find these NAD headphones a solid place to start both in presentation AND price.

The NAD Viso HP50 is a headphone that combines the talents of both the aforementioned AKG and V-Moda. The HP50 are airy, open, detailed and anything but hemmed in – VERY impressive for a closed-back design. Bass weight doesn’t knock the listener upside head but it’s a smidge beefier than the Bluetoothing AKG. The NAD is even more convincing with superb micro-dynamic dexterity and spaciousness, particularly when called upon to unravel denser mixes.

There’s no sturdy carry-case, only a pouch. The HP-50’s frame doesn’t fold-up either so if these travelling man features are of paramount importance to you, look elsewhere. But do so at your peril as NAD have made some of the finest-sounding, portable-friendly $300 headphones I’ve heard to date. Their 32 ohm nominal impedance means you don’t *need* a headphone amplifier – they sound most agreeable with both iPad 2 and Google Nexus 5 and there were no issues in running out of headroom on either device. Things get better still with the Astell&Kern AK120 – SPL accord located itself in and around 50 out of 75. 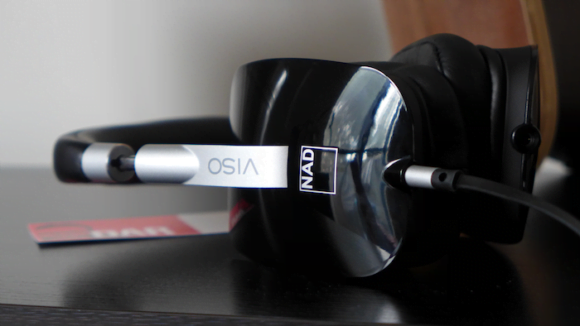 My only criticism is one of aesthetics. A criticism that (for me at least) puts the HP-50 firmly under the ‘indoor’ banner. The NAD headband isn’t as curved as the AKG or the V-Moda and won’t follow the contours of your head as closely; this means the wearer is saddled with that Cyberman look. Recontextualising the HP50 as ‘indoor’ ‘phones meant investigating the benefits of third party power.

Applying Schiit’s Asgard 2 and AURALiC’s Taurus MKII clearly demonstrated how beautifully the NAD scale with better amplification, the latter pushing them toward the upper limits of their capabilities. Back down on earth, price-commensurate portable USB DAC/headphone amplifiers are the more probably solution for your average HP50 consumer. The HP50 favoured the ALO Audio Island, benefiting from the its ‘finesse and delicacy’ M.O., more so than the bombast and carved detailing of the Resonessence Labs Herus. 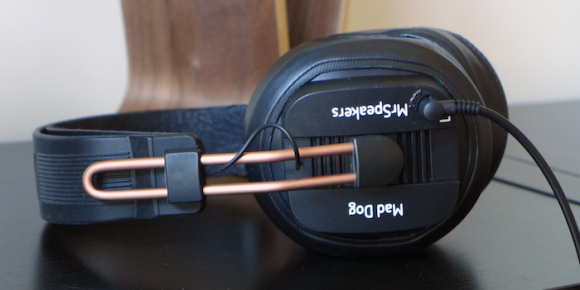 These are a Fostex T50RP modified by one Dan Clark, head honcho of San Diego’s Mr Speakers. The modifications centre around a leather ‘comfort strap’ headband and lamb-leather earpads. Know that although these are heaviest headphones of the three featured here, the Mad Dogs are by far and away the most comfortable. And they’re the ‘best’ sounding to these ears. Best low-frequency drive, best tonal mass, best detail retrieval, best communication of spatial information. That said, best headstaging still belongs to the NAD HP-50

Mr Speakers’ modding isn’t just about cosmetics and comfort, nor is it lipsticking a pig. With different earpads applied to the same driver a designer can extract different sound signatures. This isn’t just the stuff of theoretical discourse either, it’s real. Remember how upgrading the V-Moda Crossfade M-100 to XL pads made for a more overtly eloquent midrange and less loosy-goosey basslines? Refresh your memory here.

Clark mods the internals of the Fostex and hand-tunes each pair “to within +/- 2dB of our reference response through most of the frequency range” before they head out the door and onto the FedEx truck. Clark is understandably tight-lipped when pressed for details on the internal mods. A designer must keep IP close to his chest to shield himself from unwittingly kick-starting copycatting rivals.

The Mad Dogs aren’t 100% closed – they’re ‘semi-open’. Some sound leakage will be apparent to those within VERY close proximity to the listener. This makes them better suited to home-alone deployment but doesn’t preclude them entirely from bus and train trips.

For me, the Mad Dogs are 100% an ‘indoor’ headphone. Being planarmagnetics they present a slightly more onerous load to connected hardware than the dynamic driver-ed NAD and AKG. 50 Ohms/98db vs 32 Ohms/ 106.3* db and 32 Ohms/102db respectively. They sound OK with iPhone 5 – you’ll get so-so SPLs at full volume tilt – but with the weaker headphone output stage of the Google Nexus 5, forgeddaboudit. The Mag Dogs properly foam at the mouth when driven by a more powerful headphone driver. With the Astell&Kern AK120, stout SPLs were reached at 70 out of a possible 75. Headroom enough…but only just. Idealists might wish to append the AK120 with an offboard amplifier like the CEntrance HiFi-M8, Cypher Labs Theorem 720 or ALO International+. The latter brings more drive and gumption but also more bulk; pocketing the pair isn’t easy. 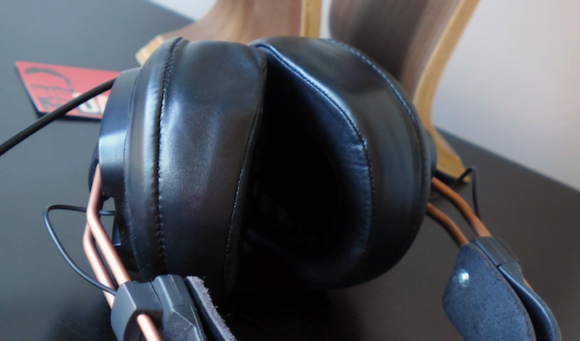 Back on the desktop, the ALO Audio Island doesn’t connote enough citrus bite to cut through the Mad Dog’s warm, dark chocolate flavours. These cans sound like you’ve strapped a huge pair of vintage speakers to your head — you’ll need source and amp to talk turkey with clean lines and guts. That’s where the Resonessence Labs Herus steps up. One of the best $300 headphones on the market today driven by one of the best dingus DACs on the market today. For US$650 all up, what’s not to love? After two weeks of Mad Dogging, I dispensed with my previous $300 ‘indoor” reference – the AKG K-702. The AKG is more lit up in the treble but more parched in the throat, predominantly due to its comparative lack of bass. The Mad Dog offers a meaty low-end that better anchors the rest of the frequency range. Interestingly, Dan Clark confesses that these ‘phones are tuned for fun. Remember fun? Nice one, Dan.

Finding a $300 headphone that can compete with the bigger boys might seem like a tall order but Mr Speakers’ entry level Mad Dog will see you getting scarily close.

*As measured by Brent Butterwoth at About.com. 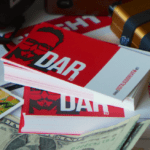 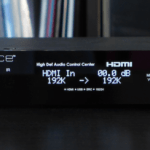