RSD. Real sodding destructive (to the wallet). I agree with Johnny Marr that records are “a great piece of cultural art”. I don’t agree with him that they cost “two lattes”. On an average day, a vinyl pressing is more expensive that its CD or download counterpart. On Record Store Day, a flurry of super-limited releases means priced higher still. $22 for a 7 inch single? Someone’s having a good laugh somewhere far away. Many of these limited edition releases get flipped on eBay for even sillier money. The eBay problem has irked Paul Weller so much that he’s out [on RSD] from hereon in.

Teasing the remastered vinyl-only re-issue of The The’s Soul Mining, Sony issued an RSD-only 12 inch single of epic closing track “Giant”. The “GIANT2FACED12INCH” single is backed with DJ Food’s 2011 re-rub of the same. Record Store Day is intended as a celebration/reminder of the awesomeness of your local vinyl emporium. That joy often has its edges sanded when faced with trying to pick up limited runs priced at a premium. That The The 12 inch sold for upwards of $35 in Australia. In the UK it sold for £9 (~AU$16).

The The die-hards might wonder why Sony didn’t run with the bonus tracks from Soul Mining’s cassette release, including “Perfect”, which is now permanently shorn from Soul Mining’s tracklist at Matt Johnson’s insistence; apparently how he originally intended it. A seven song EP like that would’ve been worthy of a $35+ sticker. One things for sure, Record Store Day isn’t about value for money, it’s about tickling the emotions of coveting a rarity (for fans) or making some easy cash (for eBay flippers). And it’s for generating media attention. Limited runs of 500 units create queues. Queues attract journalists and their cameramen. 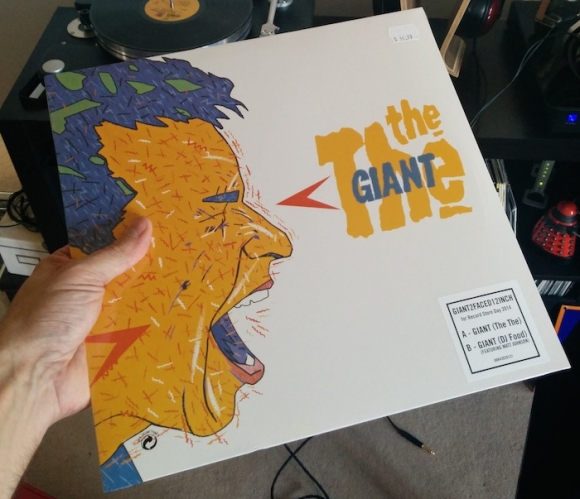 BRB. Buyer’s remorse burns. Paying $35 for a twelve inch single on Record Store (or any other) Day might smart but my credit card made it across the counter because I was buying more than just a container of music. I was buying a feeling. A feeling of loyalty: supporting the high street retailer without whom life would be considerably less interesting. I also bought that twelve inch out of fear. Fear that I wouldn’t see it again. FOMO boosts the YOLO.

Record Store Day does a tremendous job in raising the profile of the high street record store but at the same time what message is also being sent? That records are expensive, luxury items, only cherished by the most rabid of (elitist!) collectors? Clearly the organisers of Record Store Day – both at home and abroad – have some work to do next year to make proceedings a little more egalitarian, both with availability and price. If vinyl is for everyone, record companies should press more copies so that more participating stores have more stock, for longer. Would it really kill the vibe if releases didn’t sell out for a week? MORE, MORE, MORE!

Let’s go back a bit. In the run-up to RSD, a journo friend of a journo friend was looking for a last minute interview with a vinyl-hoarding nerd. I put my hand up. Having dropped $500 on records that week alone I saw myself as guy who’s sufficiently passionate about vinyl from both a collector AND sound quality standpoint. Without wanting to up the snobbery factor, there’s hardware of sufficient calibre in my house to know that many broadsheet hacks are often paying forward received wisdom that a record will sound richer and warmer than a CD. The interview call arrived but was done and dusted within three minutes: my record buying habits weren’t sufficiently aligned with the underdog-championing philosophy that underpins RSD.

In continually building a library of my favourite records I often don’t have time to get to the store, let alone crate dig. Generally, I already know what I want to buy. Three or four clicks in Google Chrome gets me what I want for around $10 less per record that I’d pay in a bricks n mortar shop. Case in point: Pixies Doolittle is $20 online, in an Australian high street store it will run you anything up to $35. Smog’s Wild Love: $18 online, $30 in-store in downtown Sydney.

In my experience, Stateside record stores price their stock a bit closer to Amazon.com and SoundStageDirect.com – it’s why I nearly always return from each US trip with a box full of the black stuff. Ditto Japan. 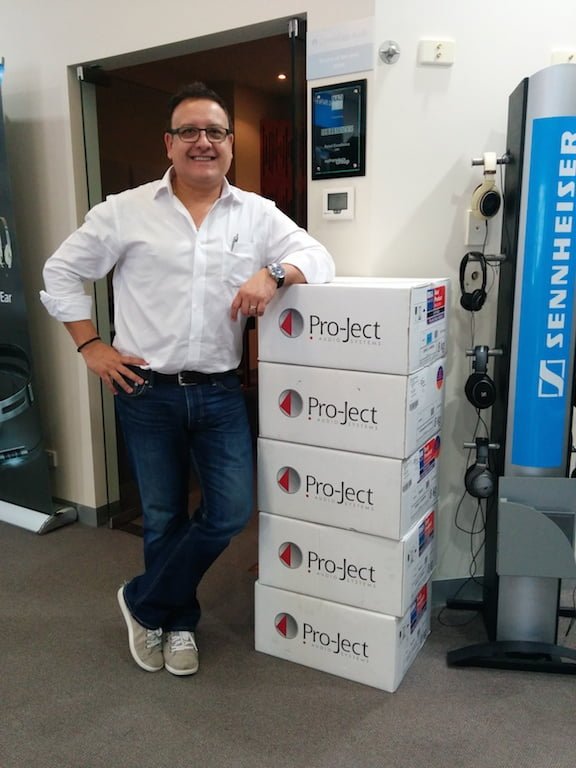 However, the majority of vinyl purchases for this fella come from the internet. Specifically, the importscd-au eBay store. How any high street store can compete with their razor-sharp pricing and AU$4.75 flat fee delivery I’ll never know. That’s AU4.75 from Irvine, CA to Sydney, Australia. To put this into proper context, AusPost would charge around AU$8.00 to send the same record from Sydney to Melbourne. Perhaps a third feeling should be added to my Record Store Day (over)spend? That feeling being guilt.

With click-only outlets having fewer overheads to cover, the bricks-and-mortar institution must argue its case beyond the (myopic) focus on price. They must up the shopping experience factor. Internet outlets will rarely be beaten on price so the local store must maximise its same time, same place advantage. And it must do this all year ’round to survive.

Hum on King in busy Newtown is where I began my #RSD2014. The early crowds had long since dispersed and Hum’s store manager (Pete) informed me that Nirvana’s Penny Royal Tea 7″ was easily the biggest seller of the day; all stock was eaten up within the first two hours of trading. Tame Impala and Bruce Springsteen had also been solid unit shifters.

The connection between music fanatic and record store is an emotional one. It transcends the clinical brain-logic of sourcing the lowest price via the web. Hum (and independent stores like it) have the home advantage on impulse purchases. Get customers across the threshold and let the store experience take care of the rest (or not). I stopped by for a The The 12″ but also dropped another fifty sheets on Built To Spill’s Ultimate Alternate Wavers RSD re-issue.

The pull of an impulse purchase was also strong five hundred metres down the road at my local hi-fi store. Nicholas Meza might have only been at the helm of Hi-fi Trader since January but, standing next to a pile of Pro-ject turntables, he talks me through some of the changes he’s already implemented: acoustic treatment of both audition rooms, some trimming of the brand range and a shiny new website.

I’d brought along the vinyl of Aphex Twin’s Windowlicker to try out on Rega RP1- and RP3-fronted systems. I also gave the lead track from Tom Waits’ Alice a spin.

Conclusions: 1) the Totem Rainmaker are mighty fine sounding standmount loudspeaker, good communicators of ambient information; 2) the Sonus Faber Toy don’t compromise low frequency perception as much as you might think, especially when switching over from the much larger (but still short) floorstanding Toy Tower. The baby Toy are a little ‘honkier’ than their bigger brother but they shovel serious low-end punch for such a miniscule box. If you live in a small apartment, they are well worth a look/listen; 3) Room treatments make a big difference and they don’t have to cost the earth. Hi-fi Trader’s second listening room now sounds less messy, less mentally confusing.

Guilt is often first up the flagpole when exhorting consumers to support their local hi-fi store. Similar to the neighbourhood record store business model, high street hardware merchants have it tough when competing on price with their web-only brethren. Just like record stores, their point of difference comes from something more intangible: shopping as an experience. Turning the high street store visit into more of an event will see it trump a sequence of browser clicks. With audio hardware, the nexus between casual consumer interest and purchase is the audition process. 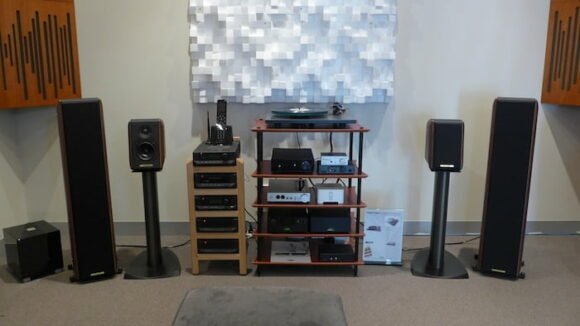 The symbiosis between Hum and The Hi-fi Trader could be better exploited by both parties.

I see an opportunity for high street hi-fi merchant and record store to combine forces for a customer experience that totals more than the sum of their parts. On record store day at least, in-store music choices could (should!) come from vinyl playback. When I visited Hum they were playing a Talking Heads Best of. On CD.

Here too was an opportunity missed by one of RSD Australia’s official sponsors (Pro-ject): to get their brand and/or turntables more prominently positioned in participating stores. What better opportunity to wow the vinyl-buying public with hardware that’ll elevate their domestic listening experience? To their credit, Pro-ject did discount the most excellent Debut Carbon for the day.

Not all is lost though: cross-pollination doesn’t stand and fall on this one special day, it takes perseverance throughout the year. Nicholas meet Pete, Pete meet Nicholas. Gentleman, it’s time for some mutual back scratching. Vertically integrated products like this are screaming out for localised alliances. Get your banners displayed in each other’s stores, get yourselves into each others’ email newsletters. 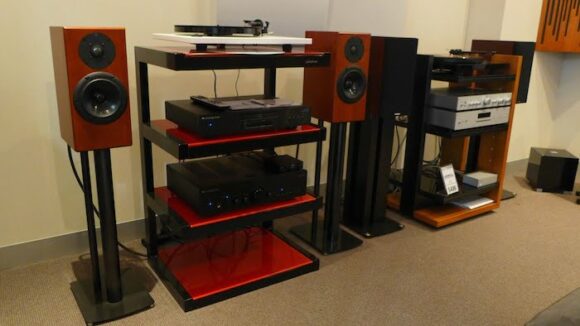 It doesn’t have to stop at brand promotion. There are practical ways to cement this mutually beneficial trade agreement.

Pete – why not supply Nicholas with a box of contemporary flavoured vinyl – at cost price of course – for him to use as audition music in his store. I’m not talking audiophile vinyl; Nicholas will be better equipped to get down with the kids with the likes of Tame Impala and Jack White. Nicholas – tell ’em the records use for the audition were sourced from just down the road at Hum.

Nicholas – why not run a vinyl playback evening in Pete’s record store one evening, say once a month? Take down those Sonus Faber Toys, a Rega Brio-R and a Pro-ject Debut Carbon? Set it up and spin some of that vinyl box in the record store. You’ll get to talk to visiting customers about the hardware and hopefully turn a few of them onto better sound. Some might not be able to afford all of it right now but others might. Which ever way it turns out, you’re spreading the message that good sound matters and that the equipment that makes it happen is readily available just up the road at Hi-fi Trader.

The online guys simply cannot compete on this kind of co-sponsored, experiential plane. 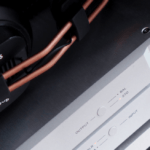 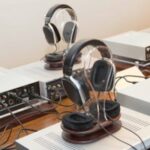