CIA. Call it active. One of the more obvious subjects in need of a shake down to keep it honest is the active speaker. It’s terribly unpopular but most unfairly so. Shy of cheap units meant as convenient computer speakers with USB inputs and on-chip amplification, serious active boxes have found precious little traction even though they’re the gold standard in recording studios. In hifi, speakers like the Manger MSMs1 and Klangwerk Ella 3 floorstanders and PMC AML2 monitor are the odd exception The latter actually stem from the firm’s pro division. The former two are routinely associated with the ‘lifestyle’ tag to connote modern and smart if perhaps not fully approved for the hardcore brigade.

Ask any speaker designer. He or she will readily admit it. Electronic crossovers are far more precise than passive versions and not bedevilled by the same phase shift. Active drive without filter parts between amplifier output and voice coil is invariably better. Electronic compensation allows not only for tighter driver matching and strategic response linearization but also makes lower louder undistorted bass from the same size box.

Ask the same designer why their portfolio includes no active model. The answer is as predictable as it is depressing. “Nobody would buy it.” True but very infuriating if your mission was to hand the end user the best most predictable performance for the most cost-effective price. 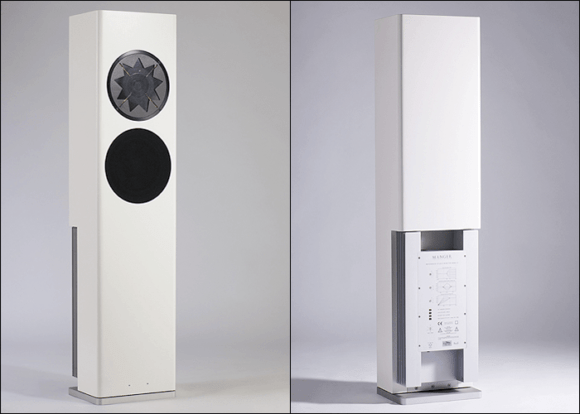 Taking a cue sheet from the Swiss Ella 3, not only is its entire electronics module purely analog, it runs class G, an advanced form of class AB with sliding voltage rails for higher efficiency. Because each amp is dedicated to just one driver to know its exact load impedance, a clever circuit embedded in the feedback loop between voice coil and amp creates adaptive output impedance. This stabilizes damping factor which in a standard combination of amp and passive speaker is all over the place.

Nearly all active boxes incorporate user-adjustable EQ for bass roll-off and often also treble trim. Many of the things audiophiles aim at in the dark with endless component and cable substitutions could be hit straight and the first time with the turn of a knob if they were active not shadow boxers.

Seasoned audiophiles know perfectly well how the amp/speaker interface is the most critical junction in the hifi chain. They’re fully prepared to admit that having a designer lock it in fully optimized to remove all guesswork is a good idea. In theory. In practice they prefer the freedom to pick and choose their own. This combination is never fully or even mildly based on hard electrical facts. It’s about chance, trial and error and endless sell ‘n’ buy cycles with much unnecessary expense. Even in the best scenario it cannot be as tightly matched as an active equivalent. It’s not possible. 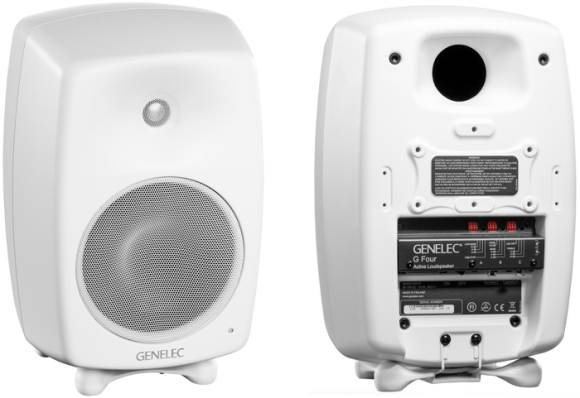 After having established a solid rep in the pro sector, Finnish speaker company Genelec have in the past few years begun to move into the hifi sector. It’s a move many electronics companies have already made, from Bryston to Manley Labs, from Benchmark Media to dCS, from Antelope Audio to Weiss and many more. Unless they open a dedicated passive consumer division like ADAM, pro-audio speaker companies simply have a harder time of it. If one wants to sell consumers active boxes, connectors also must adapt. Our kind doesn’t use TRS at all and XLR only sparsely. Pro doesn’t do RCA. Genelec’s active consumer models reflect this properly.

Still, audiophiles remain sceptic. They don’t believe that pre-installed amplifier modules inside speakers will ever be of equivalent quality to their standalone units. Given the inevitable pro connection they also question whether mastering needs—near-field use to eliminate the room, very high SPL, perfectly flat neutrality—translate satisfactorily in a living room’s ‘free space’ and to our often lower levels. The most satisfying in-room response tends not to be flat but exhibit a mild steady rise in the bass. Finally audiophiles don’t use their hifi as tool to inspect mastering errors. We view our gear as pleasure generators for an emotional experience. It thus could seems that diverging needs can’t agree on a common recipe to serve them both.

The flip side remains that makers of audiophile-approved amplifiers design around unknown load impedances and for full bandwidth. Having to accommodate a truly vast range of wildly disparate speakers—dynamics, panels, hybrids, sealed, ported, high/low efficiency, from no to complex crossovers etc.–standalone amps by definition can’t be fully tailored, targeted and optimized. On distortion and nonlinearities, even the costliest passive speaker exceeds what’s standard and acceptable for dirt cheap electronics by a factor of at least 10. Combining these two worlds would do a lot of good, eliminate cables and move costly amplifier enclosures and face plates in the trash bin as deleted.

Of course reviewers who write up classic hifi can’t own active speakers without eliminating separate amplifier assignments from their menu altogether. But end users are under no such obligation of self denial. If your priorities include integration (fewer and smaller boxes), EQ smarts, less cable salad and predictable non-lumpy turn-key performance, do not write off the category of active speakers. Not only is this approach far smarter electronically by circumventing the deplorable absence of fixed hifi standards, the fact that most active speakers are still found in pro-audio companies also means a more attractive pricing model with lower retail margins.

As we saw at HighEnd Munich 2013, Avantgarde Acoustic of Germany just introduced a fully active 3-way hornspeaker with 64-bit DSP and digital inputs. On size it’s the most compact model in their catalogue. On price it’s their entry-level effort. On tech it’s the most advanced speaker they’ve ever done. Shouldn’t that tell us something? It’s time to join the CIA. Be all you can be. Oops, that’s the army. Never mind. Calling it active is the future. 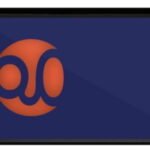 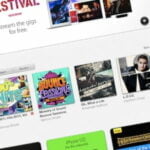