IKEA caused much wailing and gnashing of teeth among the audiophile community earlier this year when it announced plans to discontinue its EXPEDIT range. In various configurations, EXPEDIT shelves have been the go to budget storage solution for vinyl lovers for a good number of years.

The EXPEDIT range is central to this reviewer’s listening room storage arrangements. Not only does each EXPEDIT shelf accommodate Ki-Tab plastic bins (of vinyl) to the millimetre, the AURALiC Vega DAC and Taurus MKII headphone amplifier also squeeze in just so. As does the Metrum Hex.

Fear not storage fiends. IKEA has since announced an EXPEDIT replacement in KALLAX and the differences between the two aren’t as great as you’d imagine. IKEA have shaved 1cm from each side panel which likely saves them a fair chunk in both raw materials and shipping costs. This chimes with IKEA’s increasingly greater commitment to making their products more environmentally friendly. Fewer trees a-tumbling and less transport-induced CO2 emissions will see those cost savings passed on to the consumer in lower retail pricing, which at press time is TBA on the KALLAX range.

Best of all, KALLAX picks up where EXPEDIT left off with both the internal dimensions and weight rating of each shelf remaining the same: 33.5cm x 33.5cm, 13kg. 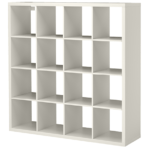 The KALLAX will be sold in 2 x 2, 4 x 1, 4 x 4, 2 x 2 and 4 x 4 configurations and promises rounder edges and a more durable film coating to protect against scratches.

The KALLAX range is due to appear in IKEA stores from the end of May.