Hello Mr Soul. Pono is the Hawaiian word for ‘righteousness’* and it’s also the name Neil Young has adopted for his venture into connecting the man in the street with ‘studio quality’ music.

Pono can be split into two composite parts: the forthcoming music store (PonoMusic) and an accompanying hardware player (PonoPlayer) that formally launched at SXSW today. The latter is being developed in collaboration with Charles Hansen at Colorado-based Ayre Acoustics. Today’s launch has brought with it further details: the Toblerone-shaped device will ship with 64Gb of internal memory which can be expanded to 128Gb with an additional memory card, touchscreen, headphone output, fixed-level output.

We already knew about the ESS Sabre 9018 DAC chip handling the digital decoding and that its associated ‘minimum phase’ digital filter has been designed by Señor Hansen. What we didn’t know until today was that the Pono won’t be a walled garden. The PonoPlayer will happily play ball with y/our existing FLAC collections as well as “most popular [high-res] music formats from other sources”. Want to get your hands on a PonoPlayer? You’ve four weeks from today to pledge your backing via the PonoPlayer Kickstarter page, where you can snaffle a yellow or black unit for a $100 saving on the $399 RRP.

Also available via the PonoPlayer Kickstarter are “Signature Series” chrome-d models ($399) from a broad selection of rock’s bigger/est hitters. It’s a cheap shot (I know) but I don’t see the Lenny Kravitz model selling anyway near as swiftly as Foo Fighters’. A moot point really as the Kickstarter campaign has already reached its funding goal within its first 24 hours online. The first players are expected to ship in October.

Young has some pretty big names going in to bat for him: Arcade Fire, Beck, Bruce Springsteen, Patti Smith, Dave Grohl, Elvis Costello, Gillian Welch and David Rawlings, all of whom can be seen using fairly emotive language in the Pono promo video to describe their (presumably) first exposure to the Pono sound in Young’s car and/or RV. Watch it and you’ll note the liberal use of words like “warm”, “rich”, “engaging” and “intimate”. It would appear few have heard Pono via headphones or an audiophile-grade two-channel setup (that many readers of DAR might own).

I gotta say, it’s kind ironic seeing Beck hang shit on MP3s and it really underlines how it’s his record company (and not the man himself) that calls the shots on delivery formats. And to Win Butler I say ,”If you dig Pono’s sound so much, how about waking up to how poorly your own records are mastered.” Enough with the bitching.

Kickstarter pegs Pono’s broader ambitions as more lofty and more amorphous: “it is a grassroots movement to keep the heart of music beating. PonoMusic aims to preserve the feeling, spirit, and emotion that the artists put in their original studio recordings”. Sorry, I’ve no idea what that all means.

PonoPlayer is only one half of the Pono ecosystem. Still to come is PonoMusic. What we do think likely is that this hi-res music download store will deliver its content as 24bit/192kHz FLAC, something that Young likens to breathing air for the first time after the “underwater” listening experience of MP3 and – to a lesser extent – CD. 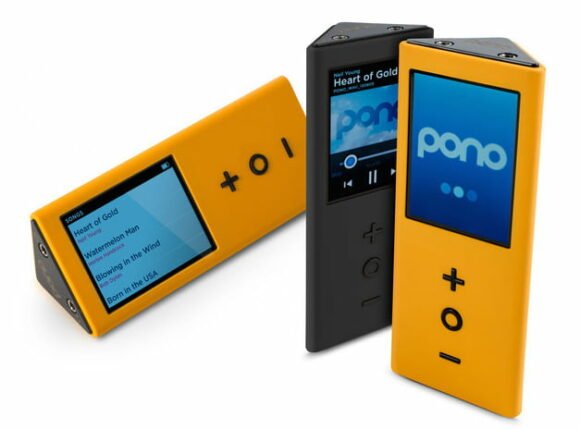 There comes a time. What we don’t know yet is if the PonoStore will arrive packing freshly commissioned masters or the same aural hit ‘n miss found on the likes of HDTracks. And unless we can get our grubby hands on fresh masters I don’t see the Pono ecosystem’s market advantage. A poor sounding record is still a poor sounding record whether it’s served up as MP3, CD or 24bit/192kHz. Masters matter more than the delivery format. Mastering quality (or lack thereof) impacts the end user’s listening experience more than bit depth and sample rate – a nettle only half-grasped by Gizmodo earlier today.

And that brings us back to Beck and his recently released Morning Phase album whose HDTracks release reportedly featured two tracks mastered from an MP3 source. Hi-res audio buyers need to be able to trust the provenance of the releases upon which they drop $25 apiece – this is something Young has the power to impact with his Pono download store.

Moreover, if the PonoMusic delivers its 24bit/192kHz content without DRM (which Chris Connaker at Computer Audiophile assures us will be the case – see below), why do we need a PonoPlayer at all? Won’t Astell&Kern, Calyx and FIIO owners take the Pono content straight to their preferred digital audio player? That’s exactly what I’ll be doing with my AK120 and Calyx M. I won’t be buying a PonoPlayer because (presumably) I won’t need it to enjoy the PonoStore content. Simples.

Let’s flip that idea around: if the PonoPlayer isn’t required to listen to content from PonoMusic, why do we need the PonoPlayer at all? Many will see it is as a portable hi-res DAP, just like the Fiio X5. It is next to this and Apple’s iPod that Ayre’s digital audio engineering must stand up.

Pono’s long term success won’t depend on its hardware player sonic merits or its (lack of) ability to slip into your jeans pocket, it rests instead on the quality and provenance of the masters currently hidden from public view inside the PonoMusic store.

Thus far, Young is leaning on theoretical arguments about how hi-res sounds superior to CD. Audiophiles already know that (sometimes) a 24/192 download can sound markedly better than its Redbook counterpart but if he’s aiming at the man in the street (which I’m sure he is), Young needs to show the consumer exactly why he needs a hi-res player. PonoMusic will presumably create the need, the player will make it come alive. It’s a shame that Pono has launched arse-first.

If we strip away Young’s name from the player we have what appears to be a competent DAP, designed by a team with formidable digital audio clout that’s selling for a reasonable price. A reasonable price in the context of audiophiles. The man in the street will likely see $400 as a HUGE investment. Put PonoPlayer in front of a non-audiophile in their twenties or thirties next to an iPod Touch – which would they go for? I’d wager that the Apple’s flexibility would win out over the Pono’s performance in 9 out 10 cases.

With a Kickstarter launch, skeptics (like me) and fencesitters won’t enjoy the benefits of feedback from early adopters on review sites and hifi forums. And that’s the rub with Kickstarter-developed products: few folk get to hear the product before it’s released and then (BAM!) suddenly thousands of backers will have one crashing through their letterbox. Only then will we know if it is better or worse sounding than the Fiio, the Calyx M and the AK100? Right now, no-one knows. Not even folk who judge sound from spec sheets.

For thoughts on what Pono is up against in the mainstream go here.

*DAR reader Chris clarifies: “Pono does not mean righteousness. It means balance with self and others. It doesn’t even translate into a single western word. Opening sentence and ya lost me. Ya know any Hawaiians?”

New from @ifiaudio, the ZEN One Signature DAC. Det

A new episode of the Darko.Audio podcast is upon u

Because why not? LINK IN BIO #DarkoAudio #merch #t

The sound of the streets #DarkoAudio #Suede #Comin

This is the killing of a flashboy. #DarkoAudio

💥 Remastered by @jochempaap himself and availab

The latest addition to the Darko.Audio listening r