Flashback. Last year I reviewed the Schiit Bifrost DAC for TONEAudio magazine. That (previously .pdf only) coverage has since been archived here but I’ll provide a quick summary for those about to jump back with “TL;DR”: AKM4399 decoder chip, coaxial and optical S/PDIF inputs, (optional) asynchronous USB 2.0 input, no SRC / bitperfect, up to 24bit/192kHz PCM handling (but no 176.4kHz on USB), made in the USA, five year warranty, pricing starting at US$350. Its sonic personality spilled forth as smooth, a little warm, rarely harsh with complex material. The Marylin Monroe of budget digital audio conversion – attractiveness through voluptuousness. 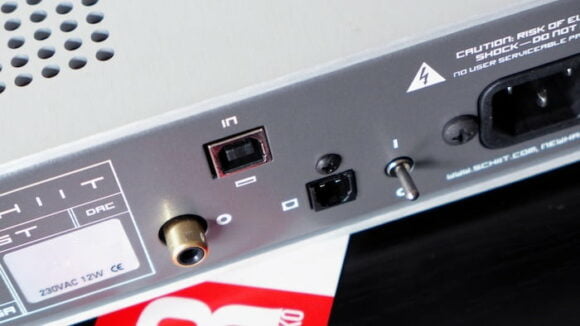 A year later the Bifrost remains a terrific budget DAC choice – it’s up there with the very best in its price bracket. You can still purchase this superb decoder for US$350. However, eagle-eyed readers will readily pick the gotcha: its USB input didn’t quite offer the performance of its neighbouring S/PDIF. The Bifrost isn’t alone in this DAC anomaly, neither is it the worst offender – not by a long shot. The shortcoming of USB inputs remains an issue with nearly all budget D/A converters, especially from those manufacturers who drop in an off-the-shelf receiver chip running stock code. You can’t really blame them though. These budget models must turn a profit and accounts departments have no choice but to turn the thumb screws hard on component costs.

Thankfully, the Bifrost was designed by Schiit to be modular. That is, if manufacturer upgrades arise post-purchase you don’t need to toss your existing unit and buy the new model.

Since my review of the Bifrost #1, Schiit-heads Jason Stoddard and Mike Moffat have improved two of the boards: the output stage and – yerp – the USB input. The Uber Analogue and Gen 2 USB boards promise performance superior to the original. #obviously.

Owners of the original Bifrost can have Schiit install the Uber Analog board for US$100. Another US$150 will see ’em fit the second generation USB board too. I’d advise those living outside of the USA to go for a DIY upgrade to save on shipping the unit to and from the USA – an expensive business. Install them yourself and you can snaffle each board at a discount: US$70 for the Uber analogue and US$100 for the Gen 2 USB. 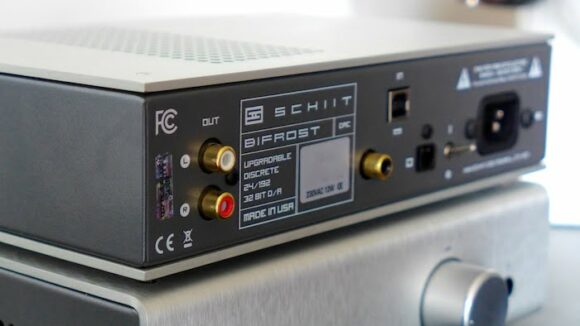 New buyers will see the standard (first generation, no USB) Bifrost still priced at US$349 – no mean feat in tough economic times – whilst US$519 nets you the full kit and kaboodle. The Bifrost + Uber analogue board + Gen 2 USB is precisely what’s under consideration here. On the outside it looks exactly like the #1 Bifrost. On the inside…

Uber? Say what now? From the Schiit website: “Order the Bifrost Uber option, and you get a discrete analog stage based on the more advanced Gungnir DAC, with a sophisticated topology that improves sonic and measured performance, and a DC servo to eliminate capacitors in the signal path.”

Gen 2 USB – wut? The second generation board deploys a CM6631A receiver chip (rather than the CM6631) which runs different firmware. There’s also additional regulation and filtering.

Knowing that he’d hitherto been unimpressed with USB as a reliable conduit for digital audio, I pressed Jason Stoddard for more info. He expanded: “The basic goal was a non-crap USB input. You’re are correct: until the Gen 2, we weren’t so hot on USB. The measurements were good and it certainly worked, but it was a bit too finicky about the USB source, cable, etc—which led to a small percentage of incompatibilities. The Gen 2 ironed out pretty much all of the incompatibilities, and measures/sounds even better than the first generation. “.

The second generation USB board plugs the 176.4kHz sample rate hole found underneath the covers of the previous USB implementation. Other than that, it’s still asynchronous, still bitperfect and there’s still no upsampling. No, it won’t do DSD. For that you’ll need to stump an additional $150 for the Schiit Loki. Again, Schiit’s mandate for the customer only paying for what they’re gonna use shines through.

If you don’t need USB you can opt out altogether…but I suggest you don’t. Schiit’s new card might be the first USB implementation in a budget DAC that doesn’t lag behind its S/PDIF coaxial input. Yes, it’s THAT good. My advice: spending the extra on the Gen 2 USB board means you’ll more-than-likely not need to reach for an after market USB-S/PDIF converter like the Audiophilleo or Wyred4Sound uLINK to get this DAC sounding its very best. Spending $150 to save $300-700 makes perfect sense.

Sound. I was pleased to discover that Schiit haven’t messed with the Bifrost recipe too much – the Uber-ed Gen 2 retains much of the essence of the Gen 1. The upgraded model exposes more detail than the original. It seems to do this by trading in a little humidity for more resolution, still delivered with (quoting from my original TONEAudio review) “pebbled smoothness”. I don’t think this DAC is quite as warm as its predecessor. The v2 Bifrost instead attracts descriptors such as ‘kind’ and ‘delicate’. It doesn’t even get close to glaring with wild eyes when handling the excitement of transients. Instead, this tricked-out Bifrost shows the competition that you don’t need to drop big dollars to get good sounding (read: finessed) digital playback; I really dug the Bifrost Uber’s more refined personality. It couldn’t quite match the Aqua Scala MK II for soundstage depth and textural grip but the Italian unit is almost three times the price.

Back under the glass ceiling of a grand, I compared the Bifrost Uber to a rival from Resonessence Labs – another company who knows how to get USB sounding every bit as good as its S/PDIF neighbour. Resonessence Labs’ Concero HD piles USB-S/PDIF conversion and DSD playback (if that’s your thing) onto its feature list, so in that sense it has the functional upper hand. Separating the two on sonics wasn’t easy. The Concero HD sound was more detailed, more ‘hifi’ than the Schiit but it wasn’t quite as natural/organic. Or creamy. Or fluent. The Canadian turns up sprinkled in sparkle and glitter, the Californian in more conservative attire. Do not confuse this with boring!

One of my acid tests for budget DACs is an album from a little-known Irish band called A House. They were mildly popular in NME/Select magazine circles in the very late eighties and early nineties. A House even supported the Go-Betweens on a US tour. Produced by then label-mate Edwyn Collins, this Dublin band’s magnum opus I Am The Greatest remains a terrifically fun/witty listen to this day. Via lesser capable DACs (e.g. the HRT microStreamer), this album’s core acoustic strum and twang, coupled to Dave Couse’s at times caustic vocal means its sound grates and then agitates. Not so with the souped-up Bifrost. Not at all! A rare feat for a budget converter.

Turning to the industrial tech-grind of Perc’s The Power and The Glory, I initially mistook the v2 Bifrost for being heavier in the bass than its rivals. More prolonged exposure saw this snap judgement morph into something far more concrete: this DAC’s tonal mass is top-to-bottom outstanding, bringing heft and forward momentum to Ali Well’s quasi-industrial compositions all topped of with an even-tempered lustre to maintain listener engagment.

Uber alles. If you like your inner detail delivered with a shade more laser-guided precision, go for the Resonessence, otherwise the upgraded Schiit is a one size fits all solution. Right now the Bifrost Uber w/ Gen 2 USB is without peer; it’s my goto recommendation for ANYONE seeking out a high quality decoder at five hundred clams. You’d probably* have to spend north of a grand to best it. An easy DAR-KO award conversion. 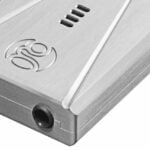